Dedicatedly exploring for Heavy Mineral Sands (HMS) in the world class HMS location of Mozambique, MRG Metals Limited (ASX:MRQ) has been developing the Corridor Projects revealing the impressive potential of HMS resources from high grade targets. The Company continued its advancement spree and has provided significant laboratory assay results from auger drilling on the Nhacutse and Bungane targets, both located within the Corridor South tenement (6621L).

These laboratory results confirm there is a new high grade HMS mineralised zone emerging at Nhacutse, open in all directions at >4% THM, with a significant higher-grade core >5% THM.

At Bungane, lab results confirm the highest grade auger hole there was collared at surface in >7% THM.

At the targets, auger drilling has generated at least one new Aircore drill target to test the potential for extremely high grade >5%THM resource from surface to supplement Koko Massava (MRQ’s first target) in a mine start-up scenario. The target zone of 4 sqkm delivers yet another significant follow up target of potential multi year mine production (already representing circa 100mt) with surface grades suitable for mill feed and possibility of continued high grades below. 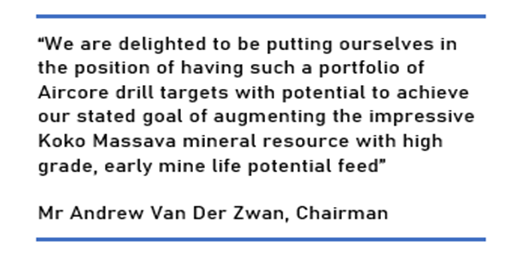 Additionally, the results reinforce significant potential for definition of a new high grade HMS resource at Nhacutse. Below were the top 3 holes reported by the Company (in order)- 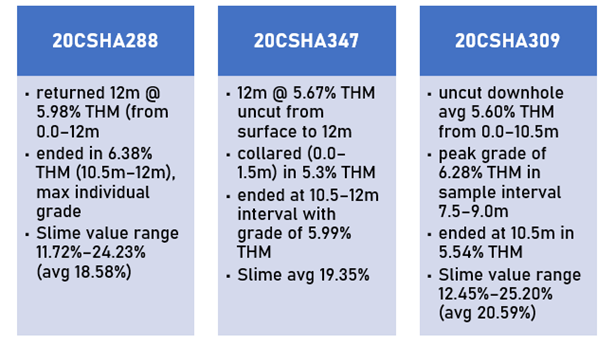 Oversize fraction characteristics of the auger sample batch have a range from 0.24%–1.54%, with a low average of 0.70%. In terms of visual results contrasted with lab results for the downhole THM grade averages, the range of absolute variance is 0.04%–1.60% THM.

Bottomline: Nhacutse could yield another significant HMS discovery for MRG Metals, owing to consistency of high grade auger holes with >5% THM downhole average, a large footprint of the HMS mineralisation coupled with near surface nature of the mineralisation.

Notably, Bungane target contains the highest grade auger hole for this sample batch and highest average grade auger hole drilled to date by MRG Metals on the Corridor Projects (Hole 20CSHA312). Below were the top 2 holes reported by the Company (in order)- 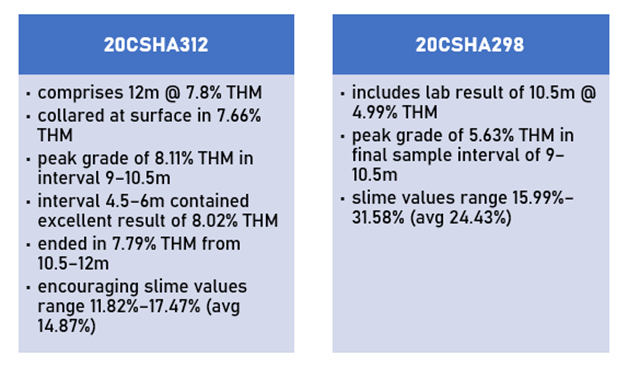 Hole 20CSHA312 correlates directly with north end of a discrete high intensity thorium anomaly 1.3km X 0.5km. In the same anomaly, Hole 20CSHA330 was drilled at the south end and yielded 10.5m @ 3.79% THM. This is suggestive of very high grade mineralisation noted in hole 20CSHA312 that may be relatively localized or may not have been intersected in the south (as it collared a higher elevation).

Comparison of visual results contrasted with lab results for the downhole THM grade averages, shows the range of absolute variance to be 0.12%–0.92% THM. Average visual grade was typically over estimated, though variance was <1% THM.

At Nhacutse, composite samples for mineral assemblage characterisation by Qemscan analysis are being prepared and will be reported once available. Additional auger sample results from remaining holes (particularly on the east side) will be reported once the sample batch is available and data has been validated and interpreted.

At Bungane, follow-up drilling will be an interesting watch.

Auger drilling will continue testing remaining outstanding district anomalies with Aircore drilling to follow. Chairman Mr Andrew Van Der Zwan informed that identified targets will be prioritised at completion of the Auger drilling, including comparable targets recently identified within Koko Massava and from recent Aircore drilling success at Poiombo, with a view to an Aircore program later this year. This will help MRG Metals gauge possibility of an even higher grade start-up resource to develop in the Corridor projects before Koko Massava.

Reported Auger drilling data forms part of a program of broad-spaced holes at 250m to 500m stations on traverses 500m to 1000m apart, designed to test geophysical anomalies. Laboratory results are for a batch of 377 samples (incl. QAQC samples) from 50 auger holes, comprising 540m of drilling.

(Note: All currency in AUD, unless specified otherwise)