Australian gold and base metals explorer Musgrave Minerals Limited (ASX: MGV) has kickstarted 2020 on a positive note amidst soaring gold prices owing to global geo-political tensions, along with the announcement of high-grade gold results from reverse circulation drilling at Lena - one of the high priority targets of Cue Gold Project located in Western Australia’s Murchison district.

In an announcement made on 13 January 2020, Musgrave announced that it has discovered more grade gold results at Lena and individual one metre re-samples from drilling at Break of Day and Mainland.

Consequently, MGV stock price witnessed a positive lift of 3.53% during the intraday trade.

It is to be noted that all three targets - Lena, Break of Day and Mainland are not part of the Evolution Joint Venture which was signed in September 2019.

The RC drill programs at all these targets consisted of a combined 29 holes for 3,568m. The company has now received final assays for this drilling with high-grade results across all three prospect areas.

The high-grade gold shoots at Lena new intercepts include:

The positive results from Lena are confirming the geological interpretation which is showing good continuity of the high-grade shoots at depth and will further enhance the resource update expected later in Q1 2020.

In addition to the above, one metre re-samples have returned:

At Mainland, the positive high-grade gold results at the Consols prospect remain open to the north-east, south-west and down plunge where further drilling is planned to commence next month.

At Break of Day, the identification of the potential high-grade ‘link-lode’ structure could be significant with further drilling planned for late January 2020. It is to be noted that this is a critical step in understanding the upside potential of this linking structure. If things proceed well, this new drilling at Break of Day could lead to a Break of Day resource update in Q2, 2020. 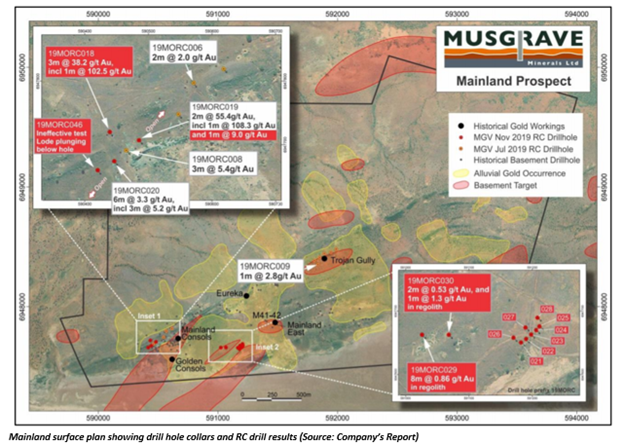