S&P/ASX 300 constituent, Dacian Gold Limited (ASX: DCN) released an announcement today (on 03 June 2019) regarding the trading halt of its shares on ASX. DCN is engaged in gold exploration and production at its 100%-owned Mt Morgans Gold Operation (MMGO), located near Laverton in Western Australia.

On 03 June 2019, DCN requested ASX to place its securities on a trading halt due to the pending release of an announcement pertaining to the production update at its MMGO, as reported. Additionally, DCN expects to resume trading following the release of the pending announcement or 5 June 2019, whichever would be earlier.

A look at the last Quarterly Activities release:

In March 2019, DCM had released the Quarterly Activities Report for the period ended 31 March 2019. In accordance with the release, DCN asserted that the production totalled 35,003 ounces from MMGO, during the period at an all-in-sustaining cost (AISC) of $1,488/oz, in line with an inaugural AISC guidance of $1,400-$1,500/oz. However, the production did not meet the expected result of 36,000-38,000 ounces due to underground equipment unavailability, which resulted in delayed access to possible drilling targets, which hosted high grades stopes.

Reportedly, the sales during the period totalled 39,315 ounces, and the silver lining appeared to be the numerous records in production across mining conducted underground (Western Australia region), mining at open pit (Jupiter) and processing operating centres at the MMGO. Moreover, these records reflected the improvement in underground production rates surging to 119,023 tonnes of ore mined – a 40% jump from the underground mine design production rates of approximately 83,000 tonnes of ore per month.

Also, open pit material movements for March 2019 were at a monthly record of 864,049 BCM, coupled with mill throughput at 241,800 tonnes, well in excess of the 2.5Mtpa design throughput levels along with record 97.1% of gold recovery.

Importantly, DCN updated full-year guidance for FY2019 to 150,000-160,000 ounces, with June quarter guidance of 50,000-55,000 ounces at MMGO AISC of A$1,050-$1,150/oz, and this had been anticipated on the back of progressively increasing grade profile, currently underway at both the Jupiter open pit and from the Westralia underground. 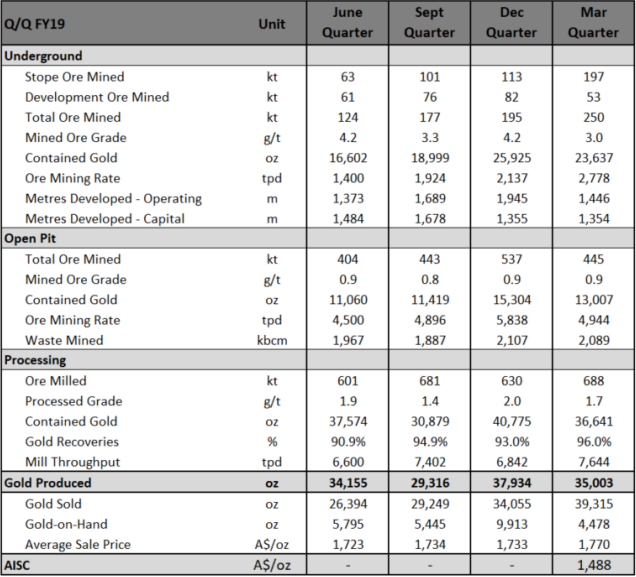 As on 31 March 2019, DCN had cash & cash equivalents of totalling A$70.2 million against A$85.6 million at the end of the December quarter, with notable inflows/outflows being -A$10 million repayment of debt and +A$174k proceeds from the exercise of share options in the investing activities.

Reportedly, the company sold 39,315 ounces at an average sale price of A$1,770/oz, which led to revenue of A$69.6 million; however, unsold gold at the end of the quarter was 4,478 ounces. Also, the expected outflow for the current quarter had been anticipated at A$89.1 million, with a notable outflow of A$19.76 million regarding debt repayment and interest costs.