The Archaean greenstone belt of the Yilgarn Block has benefitted the gold mining companies’ profitability and has been explored using modern and highly efficient methods.

Before the 1980s, the region used to be considered as a hindrance for gold exploration employing conventional geochemical exploration techniques, confining to the areas of the outcrop. However, post the period, remarkable rise in gold price has paved the way for more developed and thorough geochemical exploration strategies to explore the lateritic regolith and basement rocks.

With the evolvement of geological techniques, an advanced method of data collection and sampling using technology completely changed the scenario. And, soon after that, the North Yilgarn featured world-class gold deposits, in which Yandal gold belt was first revealed in 1980s and since then it has been the destination to several multi-million-ounce discoveries.

In the milieu of which, let us evaluate the existing infrastructure and geology in the Yandal gold belt region to gauge the Yandal West gold project.

To begin with, let us start with the Yandal West available infrastructure in terms of transportation of equipment, consumables or ore to mention few. 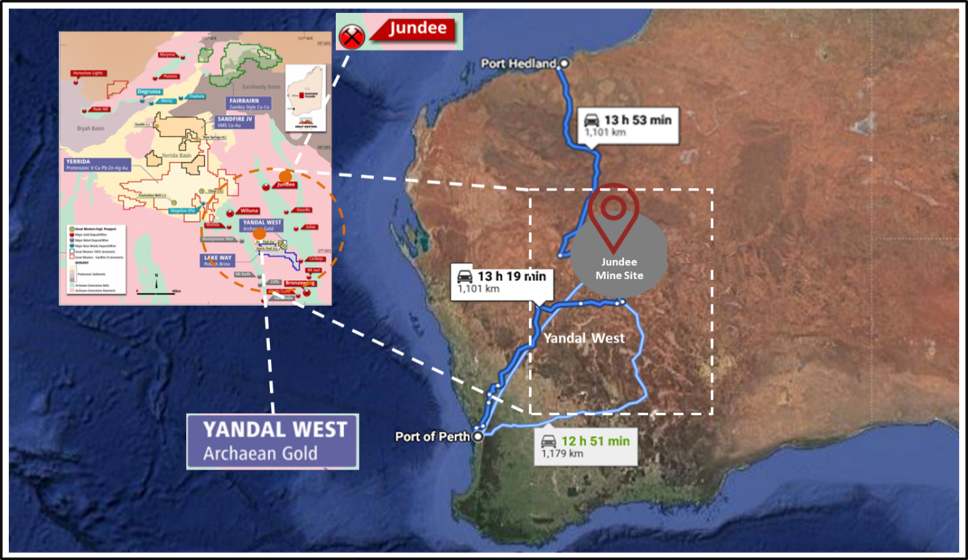 In the bankable feasibility of Yandal gold project by Echo Resources Ltd (ASX: EAR), now acquired by Northern Star Resources Ltd (ASX: NST), EAR had mentioned that they were looking for a build-own-manage contract to run the Bronzewing power station for power supply to the projects.

Hence, the Yandal West gold project may be required to build its power station or can contract power through an existing nearby infrastructure, which will be clear at the time of the feasibility study.

The nearby mines of Yandal West have shown both open pit (OP) and underground (UG) mine type with visible gold as one of the mineralisation leading to gravity separation in the processing route to effectively recover the gold. For the same let us gauge through the proximity mines in the following section.

The Jundee mine at the northern Yandal greenstone belt possesses a brittle fault-fracture system and most of which are hosted in dolerite and then minor from basalt in felsic-intermediate porphyry. The mineralisation can be disseminated and hosted in vein style (carbonate vein) with abundant visible golds.

The Matilda mine is described by orogenic gold deposits with soft and deeply weathered mineralisation and the Wiluna mines are refractory ores with gold occurring as submicroscopic particles within fine-grained sulphides. Whereas, the Yandal gold project is supergene gold mineralisation associated with silicification, minor quartz veining and sulphide enrichment, principally pyrite.

The presence of both supergene and orogenic gold with refractor mineralisation has demonstrated both types of mine (OP and UG) with gravity separation mostly knelson concentrator noticed across the mines of Jundee, Matilda and Wiluna. The processing route is mainly crushing, grinding, gravity separation and Carbon in Pulp (CIP) or Carbon in Leach (CIL) circuit or both, Electrowinning and Furnace to Dore. Also, at the Wiluna mine, Bacteria Bio oxidation (BIOX) CIL circuit is installed to treat the refractory sulphide ore.

Consequently, the Yandal West gold project too may have both OP and UG mine type with processing as above since the Yandal gold project was planned to use the Bronzewing Treatment Plant with processing route as crushing, grinding (SAG/Ball), gravity separation followed by CIL and carbon elution circuits. The gold recovery from Gravity is 30% and the remaining 70% from Adsorption, Desorption and Recovery.

How beneficial are the deposits at Yandal Gold Belt?

The acquisition of the Yandal gold project by Northern Star from Echo Resources right after the announcement of robust forecast economics of the project in the feasibility study is the testimony to the viability of the region. The Yandal gold project feasibility has depicted the mill head grade and gold recovery of ~2.15g/t and ~92%, respectively, with low bond index led to the All-In Sustaining Cost (AISC) to be in the range of A$1,035 to A$1,273.

The Yandal West gold project of GTE is aptly located with all the necessary infrastructure ranging from road, airstrip, ports and water. Whereas, power though not grid-connected but can easily be contracted or the company can have a gas fuel supply agreement to provide electricity to the mine site.

The processing activity of the nearby assets has also revealed the positivity of both OP and UG mine type with better bond index and recovery, which is expected to help the Yandal West gold project to sail through the economic study to reach the production stage.

Having said that all parameters and operational constraints are subject to future feasibility study of the Yandal West gold project.