The Company’s 100% owned, Cox’s Find Gold Project is a shear hosted Archaean orogenic gold deposit and has been producing significant results from its maiden drilling program.

For more about GSN projects, follow: Tracing the Projects and Progress of Great Southern Mining Limited

Recently, GSN announced drilling results that establish the remnant high-grade mineralisation (up to 143 g/t gold) in unmined development panels between level 5 and 6 (between 130m and 170m depth) and validate the historical mining output with significant results including:

Multiple lines of evidence like geological mapping, geophysical data interpretation etc. have facilitated the development of the conceptual targets which includes remnant mineralisation intersected in recent drilling and strike extensions.

Based on the Cox’s Find high-grade mineralisation model are the Exploration Target at Cox’s Find, and the major assumption on each structural repeat is similar to the tenor and extent and grade that was defined at the Cox’s Find orebody and similarly confined within a 200m depth extent from the surface.

According to GSN, the probable mineralisation and gold contained within the Exploration Target is presently conceptual in nature, and there exists insufficient exploration to determine a mineral resource with no certainty that further exploration work will result in the determination of mineral resources.

Gold-bearing reefs at Cox’s Find constitute orogenic hydrothermal quartz reefs hosted predominantly within a favourable chert /shale horizon, and the gold has been historically extracted from a major reef, ‘the Main lode’ which is typically 0.5 to 3.0m in width and consists of distinct smokey blue-grey quartz.

In the current drilling program, Gold grades intersected within the Main Lode show a range from <5g/t up to 143 g/t over 1m downhole lengths and are broadly consistent with the Main lode that exclusively supported historic production at the Mine averaging ~22 g/t gold and suggest the development of 1 or more high-grade shoots within the unmined panels.

GSN conducted a high-resolution magnetic, and radiometric survey and detailed structural and lithological mapping of the Cox’s Find open pit along with the RC drilling program wherein observations from the geology exposed in the pit strongly suggest that

The shear zones are interpreted to be the primary control on mineralisation at Cox’s Find, acting as both

The point where these structures pass down through the underground deposit, they are interpreted to thin out the host-lode and create a pattern of thicker panels or lenses of better mineralisation compartmentalised by higher-strain Shear Zones containing narrow, discontinuous mineralised veins. 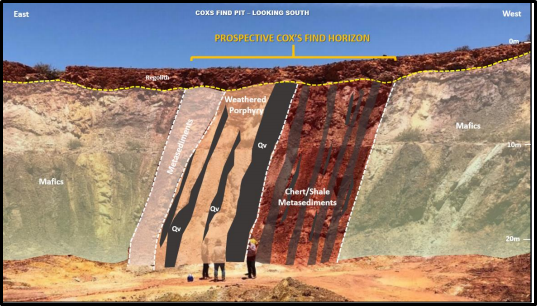 The Company also reported its activities for the quarter ended 31 December 2019.

GSN is of the view that limited exploration has been conducted on the project since the cessation of mining activities in the early 1940s and excellent potential for the Cox’s Find Mine has been identified through the preliminary review of the project.