By the end of the day’s trade, most of the sectors on ASX closed in the green zone.

The benchmark index improved by 1.49% and settled at 5,904.1. Amongst various sector listed on ASX, Banks and Financials sectors were the best performers for the day with a growth of 2.78% and 2.71% respectively. Majority of the sectors improved by over 1%.

From the Financials sector, the shares of IOOF Holdings Limited (ASX:IFL) increased by 8.475% and settled at A$5.12.

The shares of Qantas Airways limited (ASX:QAN) declined by 9.069% and settled at A$3.81. On 26 June 2020, the company completed A$1,360 million placement and the funds raised would help in strengthening the company’s balance sheet. It would also support in the Group’s recovery and position it to get through the crisis and capitalise on the opportunities aligned with its strategy.

Despite a positive update on the capital raise, it appears that people are afraid of the second wave of COVID-19, which could delay the time for the resumption of domestic travel. In past 24 hours, there are 37 new cases of COVID-19 reported in Australia.

Moreover, Orocobre Limited (ASX:ORE), from the metals and mining sector, noted a fall of 5.578% in its share price subsequent to the release of the June 2020 sales update.

Let us see the graph below to view the top five best and worst-performing stocks today: 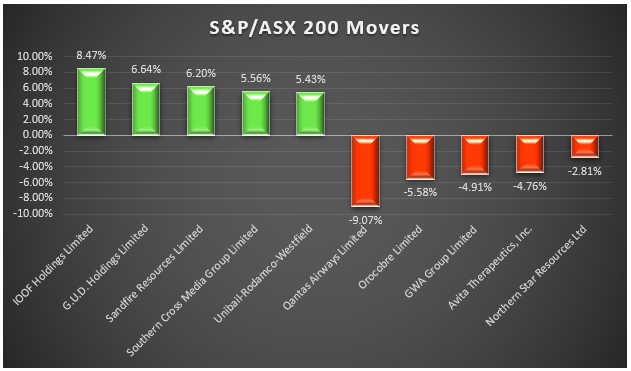