First Au Ltd (ASX:FAU), Western Australia focussed gold and copper explorer, announced the activity report for the quarter ending 31 March 2020. The explorer highlighted the major exploration results and the impact of the COVID 19 pandemic on the current exploration activities. 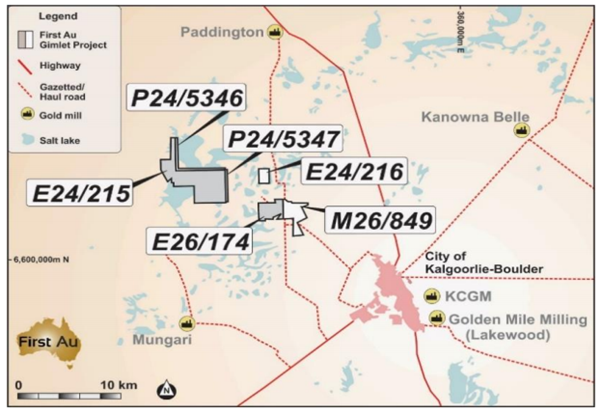 The RC program aimed to test the gold mineralisation plunge at depth to plan for further deeper exploration programs. The 4 RC drilling holes were drilled for a total of 978 metres, following which 2 of the RC holes intersected gold mineralisation-

The drilling program resulted in disseminated mineralisation of high order gold mineralisation. The results from the two holes intersecting gold mineralisation is in line with the observations from the previous exploration programs suggesting that the mineralisation is open at depth and indicates the presence of intermediate volcanic rock alterations containing disseminated phases of sulphide, quartz and carbonate veinlets. The dominating mineral from the sulphide phases are present as pyrites or arsenopyrites. The drilling program is yet to be completed, but the interim interpretation indicated the southerly plunge to the mineralised system. The next phase of results from the further RC program will provide substantial indications to this hypothesis.

First Au was awarded a $100,000 co-funding grant under the Australian government’s Exploration Incentive Scheme (EIS) which offers a grant of up to 50% refund to innovative drilling programs managed by the Geological Survey of Western Australia (GSWA).

First Au plans to utilise the grant for the to target mineralisation beneath 450 metres which is crucial for the entire Teal-Gimlet mineralised corridor. It is to be noted that the drilling would be the deepest in the region and would indicate the persistence of mineralisation in the deeper sections.

The proposed 1,000 metres RC drilling program around Gimlet has been temporarily postponed, earlier scheduled for April, due to the imposition of restrictions amid the coronavirus pandemic. The drilling program is focused on further testing the potential plunge to the mineralisation and will also be helpful for the deep diamond drilling hole. Following the completion of the RC drilling program, First Au plans to evaluate if JORC mineral resources estimate needs to be upgraded and examine the potential for the open pit mining.

JORC Mineral Resource Estimation: The maiden inferred mineral resources were estimated in April 2019 at 642,000 tonnes of ore with a grade of 3.33 grams per tonne Au, containing over 69,000 ounces at a cut-off grade of 1.3 grams of Gold per tonne of ore.

During the quarter, Fist Au was granted additional tenure around the Gimlet project. The newly granted prospecting licenses included P24/5346 and P24/5347, adjacent to the White Flag exploration licenses (EL24/215) and a new exploration license E24/216, located north of the Gimlet tenement which includes sections of the interpreted Teal-Gimlet corridor. The work programs have progressed on the compilation of the historic data, and a field visit is anticipated soon subject to the current situations. First Au also progresses on the mining lease application M26/849, located within the Gimlet resource fields.

In compliance with the government guidelines on the COVID-19 outbreak, First Au remains committed towards the health and safety of its employees, contractors and the local communities. The planned exploration programs have been temporarily deferred and the explorer awaits the lifting of the government restrictions. The Western Australian government has already waived off the minimum capital expenditure requirement for the tenements. First Au continues to evaluate the existing data and plans to recommence the field work once the current restrictions allow them.