Over the last few years, there has been growing importance of the Montney Formation, extending from north-eastern British Columbia to western Alberta, Canada. The unveiling of wet and dry gases extraction and distribution from the Formation has not only been economical but also has better carbon footprint. The presence of methane, ethane and propane carbon isotope in situ gases along with their spatial distribution has provided a natural geochemical baseline for environmental remediation.

In short, the significant rationales that made Montney Formation more competitive than other plays are: -

Also, it is worth mentioning that not only Calima Energy Limited (ASX: CE1) moved to consolidate its rights in the formation area to 100% through the acquisition of TSV Montney and TMK Montney but also Houston-based ConocoPhillips Co. has increased its drilling rights from 56 thousand hectares to 70 thousand hectares at the expense of C$154 million. The growing interest of companies in the formation in Western Canada is the testimony to the optimistic view of the Montney Formation.

During 2017-2018, most of the mergers & acquisitions (M&A) happened in the region, resulting in value creation for players. The transaction activities are expected to continue further in the anticipation of upcoming surge in LNG demand. In 2018, M&A of the undeveloped Montney land deals’ average value was greater than C$4,000 per acre where CE1 holds acreage position at less cost, i.e. A$300 per acre as of September 2019. 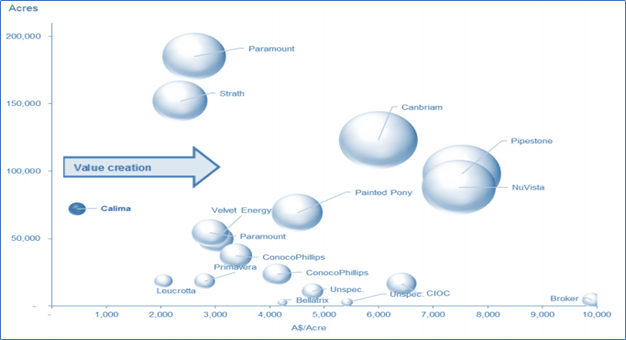 Consequently, we know that the Montney Formation has better productivity and low drilling cost than most of the significant plays of the US.

Let us now further examine the existing infrastructure at the Montney lands for better insight of Calima’s viability.

The Canadian market has seen a decline in exploration and production activity due to the shortage of egress capacity. However, the recent announcement by CE1 regarding grant of a permit to build pipeline infrastructure to connect the Calima well-pad to the regional pipeline and processing infrastructure would help in meeting the strong local demand for condensate for the use of heavy oil diluent.

Besides, the expected opening of LNG terminals would help Montney to enter into the new international market.

Introduction of LNG terminals always helped in creating the demand and thus, values for resource owners and producers. The best example is the Queensland launch of LNG terminals that helped gas resources companies’ share to sore with increased M&A activities as shown below.

At present, Canada has fourteen upcoming LNG projects with a total capacity of 183 mtpa (23.9 bcf/d), coming from the West Coast Canada and East Coast Canada, i.e. capacity of 145.5 mtpa (19bcf/d) and 37.5mpta (4.9bcf/d), respectively. Out of the total, 50% projects’ proposed date has been decided in the range from 2020+ to 2025+ worth 85.1 mtpa of capacity and remaining are yet to be decided. The launch of LNG terminals may open new international markets for Montney and global pricing for the first time, with the demand coming from LNG terminals expected to reduce the pressure on pipeline capacity to the North American market.

Calima owns 100% of nearly 72,000 acres of prospective drilling rights for the Montney Formation with total gross contingency resources of 196.1mmboe and prospective resources of 497.3mmboe. And, the upcoming pipeline with a capacity of up to 50 Mmcf/d of wet gas and 1,500 bbls/d of well-head condensate along with LNG terminals are expected to open both regional and international markets to increase the profitability and commercialisation of the projects.

Also, Calima’s field is connected to the North River’s Jedney processing plant, which extends multiple alternatives to communicate with the US and LNG export markets. In the future, connections are being planned to offer access to the Shell/Petronas’ LNG Canada Facility and Woodside/Chevron LNG Facility at Kitimat.

In line with its planning, Calima Energy has sold the Namibia PEL 90 licence (Block 2813B) and intends to sell all its other non-core assets, i.e. four offshore Production Sharing Contracts as well as Bahari Shares. At present, the company remains well funded with the working capital position.

Therefore, the viability of both Montney Formation and Calima Lands is dependent on factors including the upcoming LNG terminals and pipelines, which would boost the presence in the international market as well as help in reducing the pressure on egress capacity. CE1 is very well funded and is presently focusing on pipeline construction to venture into the market.