In a recent update, Australian-headquartered BPH Energy Limited (ASX:BPH) notified that its key investee Advent Energy Ltd has submitted an application to the National Offshore Petroleum Titles Administrator (NOPTA) to allow the drilling of the Baleen drill target in the PEP11 permit.

The PEP11 permit lies in the offshore Sydney Basin near the NSW coast, extending from Sydney to Newcastle and positioned in Commonwealth waters.

Being a second largest shareholder, BPH Energy holds a direct interest of 22.6 per cent in Advent, whose interests comprise the following: 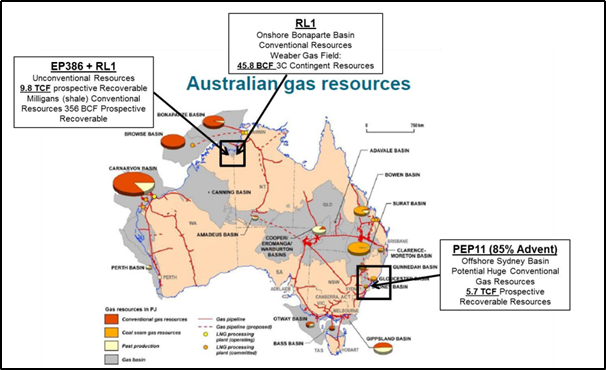 What’s there in Advent’s NOPTA Application?

Advent has made an application to NOPTA to alter the current permit conditions to progress with the drilling at Baleen.

The application submitted by Advent to NOPTA includes the extension of the PEP11 permit title for up to two years to enable the drilling and incorporates an application for removal of the need for a 500 sq. km 3D seismic program. The existing permit expiry date is March 2021.

The PEP11 JV partners, Bounty and Asset are progressing towards a drill ready status for the permit. The two parties have examined the work program and now intends to continue with the drilling of a well at Baleen contingent on the approvals from NOPTA and other regulatory authorities and financing.

To recall, Advent and Bounty finalised a 200-line km 2D seismic survey at Baleen in 2018 second quarter as a precursor to drilling of the Baleen target around 30 km to the south east of Newcastle.

BPH Energy notified that Asset has identified a new target at Baleen with AVO analysis of seismic data. Moreover, the Company mentioned that offshore operations are unaffected by the numerous onshore gas exploration roadblocks with ongoing planning targeted at advancing Baleen to a drill test in 2020.

Placed at a supreme location, Advent’s PEP11 is well-placed to potentially supply gas into the east coast gas market. The permit is a high impact exploration project, which covers 4,576 sq. km of the offshore Sydney Basin in immediate proximity to Australia’s largest gas market.

PEP 11 is a significant offshore exploration area, which remains one of the most important untested gas plays in Australia, comprising considerable structural targets that are believed to hold multi TCF natural gas resources.

BPH Energy has recognised the major gas supply crisis escalating on the east coast of Australia. The Australian Energy market Operator, in its latest Gas Statement of Opportunities (March 2019), cautioned about possible supply shortages occurring on the nation’s east coast in five years, especially in the southern states.

The Company mentioned that the major gas supply issues developing in eastern Australia have created a significant market opportunity to raise funds to drill at Baleen with the intention of advancing the PEP11 project. It is imperative to note that discussions are ongoing with investors to fund drilling at the target.

Moreover, the rising domestic wholesale gas prices that have put many trade-exposed Australian manufacturers under intense pressure, offers a considerable opportunity for Advent. The Australian Competition and Consumer Commission validated in a report in April 2019, that the domestic wholesale gas prices have soared two to three times sharper than historical prices. The average LNG netback gas price has been estimated at around $9 per gigajoule for 2020.

In a nutshell, aggravating gas supply crisis on the east coast of Australia and the rising domestic wholesale gas prices strengthen the market opportunities for Advent in the nation’s gas market. BPH Energy believes that its key investee, Advent is uniquely placed to potentially satisfy mounting energy demand from each of its interests.