What is Latest in the Australian Automotive Industry?

The health minister Matt Hancock said that the UK will be able to start its vaccination drive next month before Christmas. Bulk of the rollout will begin by the next year’s beginning with life returning to normal after Easter, he added.

The minister shared this news after AstraZeneca announced that its vaccine could be up to 90 per cent effective.

England's deputy chief medical officer Jonathan Van-Tam has informed the members of parliament (MPs) that the Oxford University’s vaccine, being made by AstraZeneca, might be ready for a rollout right after this Christmas. He is one of the country’s senior most renowned medical heads.

An early vaccine deployment would automatically have a significant impact on hospital admissions and deaths across the nation, emphasised Van-Tam. He appeared bullish about the stage III trial results of AstraZeneca’s candidate and wanted to protect the vulnerable and the elderly first. 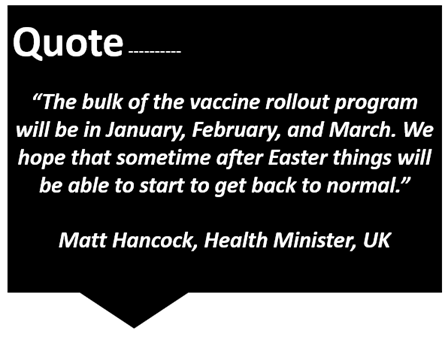 The UK government had introduced new laws last week to allow a larger number of healthcare staff to administer the vaccine candidates. Van-Tam applauded these new rules by saying that they would complement the fact that the vaccines are being speedily developed and would save lives.

All the potential vaccine candidates are needed to undergo three stages of clinical trials. These trials assess them for effectiveness and safety. Then they go to the regulator for final clearance before they can be given to people.

These legal changes would help ensure that the nation can soon roll out a vaccine as soon as the trials and regulator checks are through, said Hancock. He added that the aim was to raise the number of trained professionals to administer the vaccines under the National Health Service (NHS). The changes being undertaken in the Human Medicine Regulations will authorise any temporary supply of Covid-19 vaccine required for the public.

Once the vaccine meets the standards needed by the UK's Medicines and Healthcare products Regulatory Agency (MHRA), the inoculations can begin without a need for a medical licence from the European Medicines Agency, which is otherwise needed till 31 December, the end of the Brexit transition period. 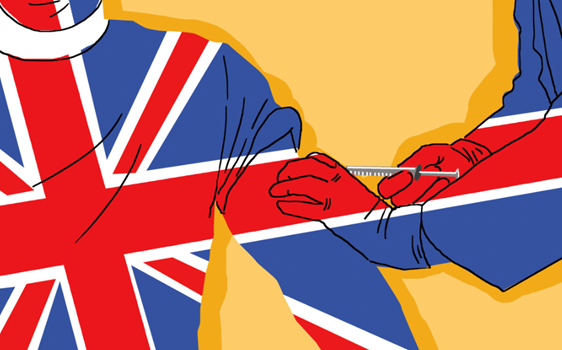 Updates from AstraZeneca, Pfizer, and Moderna

The UK could give regulatory approval to Pfizer coronavirus vaccine candidate this week, being developed in association with Germany’s BioNTech, as per media reports. The national regulators are starting the formal appraisal process for the vaccine, the news reports cited. In fact, the NHS has been told to be begin administering it by 1 December.

Last week, Britain had requested the MHRA to assess the Pfizer vaccine’s suitability with regards to its safety, quality, and effectiveness. UK is expected to receive 40 million doses of this vaccine by the end of next year. As per expert estimates, it will be sufficient to vaccinate one third of the British population.

On the other hand, about 100 million doses of the AstraZeneca vaccine are being developed for the UK. Interim data has suggested that the vaccine candidate offers 70 per cent protection against the viral disease. But by tweaking the dosage, the efficacy could go up to as high as 90 per cent, indicated the researchers.

The Oxford University-AstraZeneca vaccine update was released on this Monday and it took a day for the LSE stocks to react. Buoyed by the news, many travel and tourism stocks moved up on Tuesday. The top movers were noted to be TUI (LON: TUI) up 10 per cent, Rolls Royce (LON: RR.) jumping by 7 per cent, and Carnival (LON:CCL), ahead by 6 per cent as compared to their previous day’s close.

While the efficacy of the Pfizer and Moderna candidates is higher and offer a 95 per cent protection rate, the AstraZeneca jab comes much cheaper. It is far easier to store and transport as well.

Some of the key questions that still remain to be answered are the dosage amount, how easily could the shots be delivered, and the length of protection each dose would offer.

Probably more complete data is required to understand how exactly a vaccine regime works on people --- especially the old and the vulnerable --- to gauge its effectiveness.

The world needs as many vaccines as possible to bring an end to the pandemic. There is really no competition as we do not have enough capacity till now. So even if it might sound strange ---- the more the merrier.