Software refers to a set of programs or data or instructions that are used to operate computers. Companies engaged in the development of software are called as software companies.

Like other countries around the world, Australia is also making huge investments in the technology sector to take advantage of the economic and social opportunities that a digital economy can bring.

As per analyst firm Gartner, the expenditure on IT products and services is expected to reach $98 billion in 2020 in Australia. In the descending order, a significant portion of this amount would be used in IT services, then in communication services, software, devices and lastly in data centre systems.

In this article, we would cover three software companies in Australia and look at their recent announcement/s.

During the last few days, Xero Limited (ASX: XRO) was under discussion due to the below-mentioned media releases. Letâs look at them.

On 17 October 2019, XRO announced its agreement with RSM Australia (RSM) related to the transition of national accounting firmâs tax and compliance work onto Xero. RSM is a leading professional services firm in Australia and its customer base (middle-market) is one of the largest in the country. XROâs agreement with RSM includes the latterâs 30 offices across Australia, and XROâs cloud-based accounting solution would be made available to RSMâs client.

The agreement between XRO and RSM follows the formerâs Australian integration with cloud practice-management solution GreatSoft. The integration would provide mid-tier and large firms with tools to support them in managing their practice while offering advisers and their clients the benefits of Xeroâs platform.

Xero, in partnership with Dynata, conducted a survey during August 2019 with 1,000 Australian workers (geographically nationally representative) to understand how Aussies relate to payday.

The Payphoria Study was performed to coincide with the introduction of Single Touch Payroll for all small business employers, as of 1 October 2019.

The study also found that 63% of respondents were facing financial challenges before payday. They depended on short-term solutions to support them ahead of payday. To overcome these challenges, 1 out of 5 Aussies look towards Afterpay, payday loans, overdrafts or credit cards, while 12% ask their friends and family to support them.

The study was also designed to link the frequency of how often the citizens are paid to their ability to save. Based on the result, it was found that most of the workers who were paid monthly were more likely to save. On the other hand, those workers who were paid every week were more prone to spending. The study also confirmed that people living in the city save more than those living in the rural region.

The study on the payday patterns of Aussies unveiled that they have a huge emotional as well as psychological response to their income.

As per a media release on 22 October 2019, Xero Limited will provide more than 850,000 Kiwis with free and confidential wellbeing support, in response to the results of the 2019 Small Business Wellbeing Report that was commissioned by Xero in association with the Mental Health Foundation of New Zealand.

On 22 October 2019, Xero announced the expansion of its partnership with UK-based GoCardless to help small businesses in the US and Canada to stay on top of their cash flow.

With the integration of GoCardless and Xero, small businesses would be able to say goodbye to late payments, by using automated clearing house (ACH) debit in the United States and pre-authorised debit (PAD) in Canada to automate payment collection and reconciliation.

With the new âGoCardless for Xeroâ payment solution, which automates the payment process, the admin time will reduce, and online payments would streamline.

In the FY2019 result market update, Computershare Limited (ASX: CPU) announced a market buy-back of shares worth $200 million which started on 03 September 2019 and will continue till 02 September 2020 or earlier if the buyback completes before that date. The company holds the rights to vary, suspend or cancel the buy?back at any time.

The company is progressing well with its share buy-back plan.

The funds raised through the placement and the SPP will be used to drive strong customer as well as revenue growth. 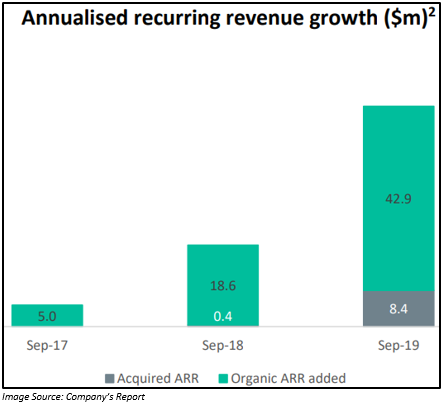 LVT is pleased with the sales and marketing activity early in Q2 FY2020, backed by a strengthening pipeline along with a more engaged and larger partner channel.