Retail Space on a different pitch now - Impacts of partnerships

Partnerships, joint-ventures, strategic co-operations etc. are economical ways of entering to budding pockets of growth for conventional players in any industry, whereby allowing mature companies to mentor the young companies that are inexperienced and sometimes in need of fresh capital.

If the executions were to be efficient, these initiatives could yield attractive outcomes for both parties. Specifically, for retailers, collaborations with other companies provide additional exposure for revenue as well as customers.

In the meantime, the integrity in the collaborative agreements by both parties would be crucial in delivering favourable outcomes. Thus, ensuring that both businesses understand the responsibilities, accountabilities, and capital deployment.

It was reported that the term for the partnership is five-year enabling the meal-kit provider, Marley Spoon, to expedite growth in Australia. As a part of the agreement, the supermarket giant, Woolworths, provided funding of $30.5 million in structured debt-equity.

It was noted that the partnership would see the implementation of operational synergies. Also, the supermarket giant’s industry experience, large customer base, sourcing and supply chain capabilities would enable Marley Spoon to capitalise of arising opportunities efficiently.

In addition, the meal-kit provider’ capabilities in distribution, manufacturing, and experience in home-delivery services would augment the supermarket giant’s customer offerings.

Incorporated in 2014, under the German laws, the company’s CDIs are listed on ASX since 2018. MMM operates in three highly developed jurisdictions – the United States, Europe and Australia.

In Europe, the company’s footprint expands to Austria, Belgium, Denmark, Sweden, and the Netherlands. It has three brands – Marley Spoon, Dinnerly and Martha & Marley.

In an announcement to exchange on 30 January 2020, MMM reported highlights of the fourth quarter ended 31 December 2019, and it expects to report the CY2019 audited results in February.

In Q4, the company fetched revenues of €35.2 million, indicating an increase of 23 per cent over the Q4 2018. It achieved a lower acquisition cost, improved promotion efficiency.

It was reported that marketing expenses as a percentage of sales in the quarter were 17 per cent, which was 26 per cent in the Q4 2018. Meanwhile, the operating EBITDA loss narrowed to €2.4 million as against €8.4 million in pcp.

During CY2019, the company delivered 22 million meal kits to its global customer base, resulting in a revenue of €129.6 million that exceeds the previous guidance while indicating a year-on-year increase of 41 per cent.

In Australia, the business recorded revenue of €13.8 million in Q4, up over 50 per cent over the pcp. MMM has been collaborating with Woolworths to deliver all financial benefits through the partnership with retailing giant,

And, it is believed that the partnership would underpin the performance of the segment in the future. It was noted that the company didn’t have any significant impact to its food supply chain amid bushfires, while contingency plans are in place to tackle any adverse material developments.

In the United States, the company’s revenue from the segment increased 18 per cent in Q4 over the pcp, which was underpinned by the expansion of Dinnerly. MMM also saw an increase in productivity and improvement in the quality of manufacturing centres.

During the quarter, the company appointed new CEO for the US operations – Julie Marchant-Houle, who comes in with significant experience in consumer-packaged goods industries with P&G, Revlon and Celestial.

In Europe, the revenues in the region contracted by 4 per cent in Q4 over the pcp on the back of operational challenges related to the changes in manufacturing footprint of the company in first-half of the year.

These challenges were resolved in the second-half of the year along with the consolidation of production activities in the Netherlands. It is believed that the European business is placed to deliver growth in 2020, coupled with new geographies. 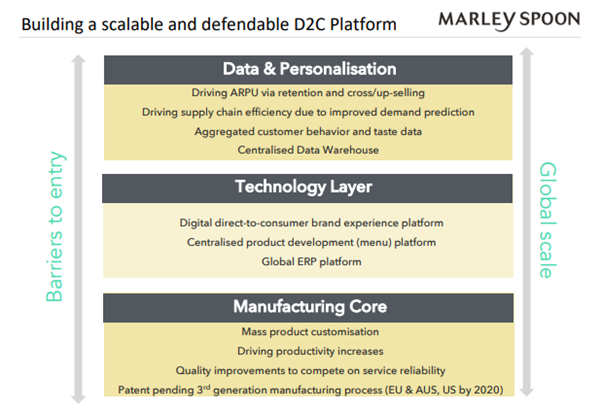 It was reported that the US-based VC firm – Union Square Ventures would invest another $3.7 million via a 3-year loan, and the company would seek shareholder approval, for a convertible bond clause, that would be sought in May 2020.

In Q4, the operating cash flow was negative €7.4 million due to a seasonal decrease in payables and lower marketing spend during the holiday period. By the end of CY 2019, the inventories were flat at €3.7 million for a third consecutive year.

Cash flow from investing activities was negative €1.2 million for the period. At the year-end, the cash balance with the company was €5.4 million, which was down from €7.9 million sequentially.

It was said that the company is in a position to deliver robust revenue growth along with improvements in contributing margin and operating EBITDA margin.

MMM expects that the business would turn operating EBITDA positive by the end of CY2020, and key risks to the company’s forecast include: