Psychedelics have a long history of being studied and used for the use of mental illness. Psychedelic drugs were banned in the 1960s and had not been explored much in the next couple of decades. However, since the turn of the century, there has been a renewed interest in psychedelic research.

With a many clinical studies being conducted across the globe for disorders such as anxiety, addiction, depression and post-traumatic stress disorder (PTSD), among others, the world witnessed the approval of the first psychedelic drug in March 2020 – esketamine approved by the US FDA. With an increased focus on the medical benefits of psychedelics, could the use of these drugs be the next revolution in the medical illness space?

Psychedelic drugs, or hallucinogens, are psychoactive drugs that modify an individual’s mood, awareness, thought process as well as the cognitive process. These drugs can either be produced synthetically or can be plant-based, naturally occurring substances.

While several studies have demonstrated the medicinal effects of psychedelic drugs, they are widely used as a stress buster or just to have a different feeling. Some of the major hallucinogens include D-lysergic acid diethylamide (LSD), peyote, Dimethyltryptamine (DMT), ecstasy and psilocybin (also known as magic mushrooms). 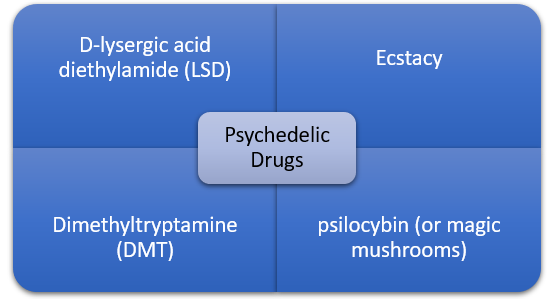 Psychedelic research has been the in-thing recently with studies being carried out across the globe, research centres being set up for focussed research, and healthcare regulatory bodies relaxing their rules and supporting further studies around hallucinogens and their perceived benefits to treat multiple disorders.

Johns Hopkins Medicine unveiled the Centre for Psychedelic and Consciousness Research on 04 September 2019. The aim was to conduct studies on psilocybin and LSD, among others, for mental health disorders such as depression and addiction. Before this announcement, on 26 April 2019, Imperial College London announced the start of the first psychedelic research centre across the globe.

Concerning the clinical studies, there has been a significant development in the last year. On 02 December 2019, psilocybin was granted a breakthrough therapy designation (BTD) for the treatment of major depressive disorder (MDD) by the US FDA. Earlier, psilocybin had received a BTD for use in treatment-resistant depression (TRD). In addition to the approval of esketamine in March 2019, this designation highlights the interest and concern shown by the regulatory body for the significant number of individuals suffering from disorders and the huge unmet need.

Furthermore, numerous studies are being conducted in the UK to assess the potential of psilocybin as a treatment for depression. King’s College London announced positive Phase I results for psilocybin and expects to release the results of the Phase II study by 2021. Also, a recent study published in the Psychopharmacology journal demonstrated that LSD, administered orally, was safe and tolerable for the treatment of Alzheimer’s disease. In another study, published in the Neuroscience of Consciousness, it was found that psilocybin may help people suffering from disorders of consciousness due to brain injury.

The continued focus on psychedelic research has led to a few new companies entering the unexplored space. US-based start-ups such as Sträva Craft Coffee, Silo Wellness, and CaaMTech, LLC are engaged in the investigation of psychedelics in mental health disorders.

While Australia might not be in the same league as that of the US or the UK with respect to the research efforts in the area of psychedelics, the country has begun focussing on studying psychedelics as a potential treatment for various mental health disorders. St Vincent's Hospital Melbourne is conducting the country’s first clinical study of for hallucinogens with the trial focussing on the psilocybin as a potential treatment of severe depression. Some experts believe that psychedelics could be approved in the country in the next five years.

Psychedelic drugs have proved to be effective, safe and tolerable in the studies conducted so far across the globe. These are still early days and several late-stage studies (Phase III, post-marketing) studies haven’t yet begun and there could be dropouts among the candidates.

However, with a large number of people suffering from at least one form of mental illness and the dearth in proper treatments, coupled with improved efforts from the governments across the globe to facilitate the studies and remove barriers that could hinder the approval of a drug, the promising early-stage results of these drugs make the future of psychedelics look bright.

The situation is not completely favourable though. The drugs, despite their potential, are still looked at as harmful drugs by a significant percentage of people. In a survey conducted in 2019, ~40 of the respondents, who had never had a hallucinogen before, were unwilling to take the medicine due to a fear of potential adverse effects of the drug. Another challenge that the industry faces is that once a drug is approved, off-label uses are likely to go up. This way, a drug might be prescribed for a legitimate medical purpose or just to promote the well-being of an individual or to even enhance performance. Thus, it is imperative for the regulatory authorities to educate the physicians and ensure that the drugs are prescribed only for the approved disorder.

While the US FDA did approve a psychedelic drug in March 2019, the acceptance of these drugs at a global level might take a substantial amount of time. Despite the increased focus on the potential benefits, legal commercialisation of this class of drugs will require overcoming a lot of barriers.

With the medicinal benefits of psychedelics coupled with the high prevalence of medical illness and a substantial unmet need, if the future studies provide favourable results and the regulatory authorities show their willingness to approve these drugs for commercialisation, psychedelics might be the ‘next big thing’ in the healthcare industry.