The Star Entertainment Group Limited (ASX: SGR) is an Australian registered company involved in the management of integrated resorts with gaming, entertainment and hospitality services. It was officially listed on ASX in 2011. On 11th June 2019, the company provided its Trading and Earnings Update to the market. As per the release, SGR stated that the domestic revenue growth trends throughout The Star Properties have witnessed a rise of 0.3% between 1st January to 8th June 2019, while total domestic revenue reported a growth of 3.1% in FY19 YTD on the pcp. The international VIP trends have continued to flow from first half FY19 to second half FY19, with a fall of 31.1% in turnover in H2 FY19. The company reported normalised EBITDA of $297 million and statutory EBITDA of $331 million in 1H FY19.

The slowness in domestic growth reflects the difficult macroeconomic circumstances throughout its operational areas and low hold rates on tables in private gaming rooms along with the effect of disruption located at The Star Sydney from capital works. Additionally, the slots revenue for the period increased by 1.6% when compared to pcp. In the month of January to April 2019, the combined Brisbane/Gold Coast slots have witnessed a rise in the market share while the table games revenue declined by 0.8% on pcp. However, the group’s private gaming room volume growth continued to increase at a faster rate as compared to the main gaming floor volumes. 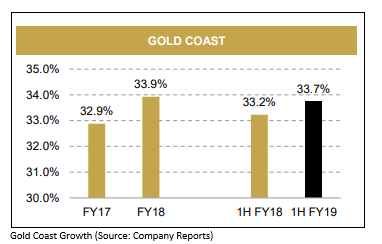 Looking at the company’s cost management initiatives. The company previously communicated that the creation of the centre of excellence in gaming and marketing allows the group to improve its processes, capability and decision-making. In addition, these improvement initiatives enable the consolidation of functions and offer the opportunity to produce material cost-savings throughout the non-customer facing areas and functions.

SGR expects to finish the excavation of the site at Queen’s Wharf Brisbane in July 2019, which is in check with the project timetables. Furthermore, the construction of the company’s first joint venture tower with its partners Far East Consortium and Chow Tai Fook is under work-in-progress status with the expected completion in FY22.

To shed more light on the financial metrics. The group has reported satisfying numbers. The gross margin of the company stood at 95.8% in H1 FY19 when compared to the industry median of 55.1%. The company’s return on equity was 3.9% in H1 FY19, which reflects a growth of 2.9% on a Y-o-Y basis. (Source: Thomson Reuters)

The company anticipates normalised EBITDA in the range of $550 million to $560 million for FY19 based on revenue growth rates. SGR has targeted annual cost savings run rate in the range of $40 million to $50 million per annum to be achieved by the end of Q1 FY20. The conclusion of expansion and upgrade of the Sovereign Resorts located at The Star Sydney remains on track for mid-CY20.

Crown Resorts Limited (ASX: CWN) operates casino and gaming business with key investments in international markets. The company lately published its Half Year Results Presentation, wherein it highlighted the operational and financial performance. The normalised NPAT attributable to the parent for the period amounted to $194.1 million, which implies a growth of 0.9%. Additionally, the reported net profit after tax attributable to the parent stood at $174.9 million, reflecting a 9.9% increase. The company also declared an Interim Dividend of 30 cents per share.

Looking at the Australian resorts’ performance. The normalised revenue for the period was $1,536.7 million, a fall of 1.2%, while main floor gaming revenue stood at $867.7 million, up 0.9%. The Crown Digital side of things includes EBITDA from the company’s wagering and online social gaming operations, with a 100% owned, online betting exchange, Betfair Australasia and an 85% owned online social gaming business, DGN Games. 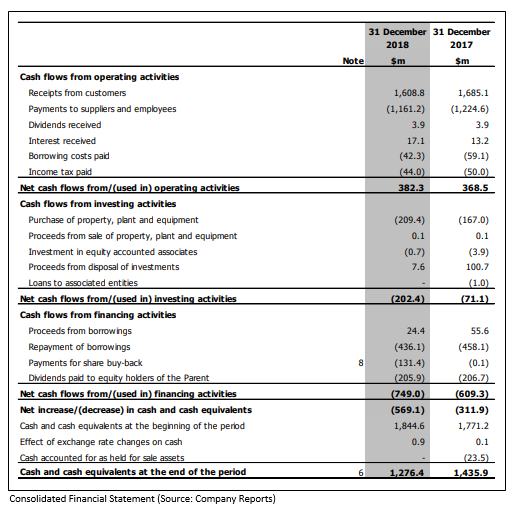 In another release, CWN noted the proposed One Queensbridge Project, which is a 50/50 JV between the company and Schiavello Group. This project reflects the company’s ongoing investment in the entertainment precinct and Southbank arts. This, as a consequence, will result in Crown Melbourne providing total of around 2,000 hotel rooms, which may underpin the Melbourne’s tourism industry.

On 31st May 2019, the company informed investors that CPH Crown Holdings Pty Limited, which is a wholly-owned subsidiary of Consolidated Press Holdings Pty, signed an agreement for the sale of 19.99% of the issued capital of the company to Melco Resorts & Entertainment Limited. The consideration for the agreement is $13.00 per share for an aggregate purchase price of $1.76 billion. After the conclusion of the agreement, the subsidiary company will hold 26% of Crown with a value of around $2.3 billion.

Consolidated Press Holdings Pty Limited is positive about the prospects of the company and its world-class resort facilities in Melbourne and Perth along with the opening of the new Crown Sydney at Barangaroo, which has been scheduled for the first half of CY21.

Turning to the financial metrics. The liquidity ratio of the company stood at 1.28x in H1 FY19 when compared to the industry median of 1.10x, reflecting the company’s sound position to address its short-term obligations as compared to the broader industry. The company reported satisfying numbers, with a gross margin of 20.0% in H1 FY19, representing a growth of 1.8% on a Y-o-Y basis. The return on equity amounted to 3.4% in H1 FY19. (Source: Thomson Reuters)