Minting Money While the Asset Price Tanks; Enter the World of Short Selling

Before diving into the concept of short interest, an investor should have an idea about short selling as short interest is related to the number of shares that have been sold short, however, they are not yet covered or is in the open positions. Let’s start with the theory of short selling.

Short selling is a trading strategy that makes money for the trader when the price of any securities or any stock trading on exchange starts falling. Short selling is an advanced strategy generally undertaken by the traders as well as the investors with ample experience in this field. This strategy is used for hedging the downside risk of the long position (refers to buying of an asset with an anticipation of an increase in value in the near future).

Short selling is a very simple concept in which an investor studies particular security or asset. While studying a particular asset or security, he feels that the price of that asset will decline in a couple of days. He then decides to borrow that particular asset or security from the person who is holding the asset with a promise to return the asset on a particular date. The borrowing of the asset is facilitated by the brokers. Now he sells that asset in the market at the current price and gets the money. Next, as and when the price of that security or asset falls and the investor would buy that asset back at a lower price and return the asset to the original holder of the asset. Thus, the difference between the price at which he sold the asset and bought the asset next day becomes his profit.

How to Short Sell?

In order to short sell a stock, an investor needs to have a margin account where they can borrow funds which enable them to initiate a short position. The investor borrows a stock against collateral, which is then sold and then repurchased.

Short interest refers to the total shares that the investor has sold short, but it has not been repurchased to close the short position. Short interest acts as an indicator of the market reaction. It indicates the pessimistic view of the market pertaining to that particular stock.

An extremely high rate of increase in the short interest gives an indication that the investors are very pessimistic about that particular stock. The probable consequences could be:

On the other hand, if there is a decrease in short interest, then it gives an indication that the investors have become bullish.

Short Interest ratio can be influenced by both average daily trading volume as well as the number of shares short. Now the question arises how?

To answer this, when the number of shares short increases, the overall ratio also increases. Also, the fall in the average daily trading volume results in an increase in the short interest ratio.

An increase in the ratio is an alarming position for an investor to enter into a new short position. Short interest ratio also informs about the no. of days to close the position, the short interest as a % of the float. To better understand this concept, let’s consider a case. Suppose an investor has sold short 1000 shares of a company which has an average daily trading volume of 100 shares. In that case, if all the shorts want to get covered at the same time, then there would be a need of 10 days.

Before using this ratio, an investor should keep in mind that high short interest ratio is subject interpretation. Let’s have a look at them.

Suppose a company is engaged in the development of a particular product, which is considered unsafe in the market based on the initial reports. As a result, short sellers may pile-up the stocks, which pushes the short interest as a percentage of float more than 10%, indicating a significant pessimistic market sentiment. Now, as time passes, the perception with respect to the product might change and now might be considered safe to use. It can result in a sudden increase in buyers interest. Short sellers might also be forced to cover their position (means that buying the stock to close the short position). As a result, the stock price may increase further.

After having an idea about Short selling and short interest ratio, let’s look at their pros and cons

Pros and Cons of Short selling

Is short selling allowed in Australia?

Naked short sales tend to have a greater risk of settlement failure as the seller has already made the sale, but he still has to arrange a presently exercisable and unconditional right to vest during the time of sale. 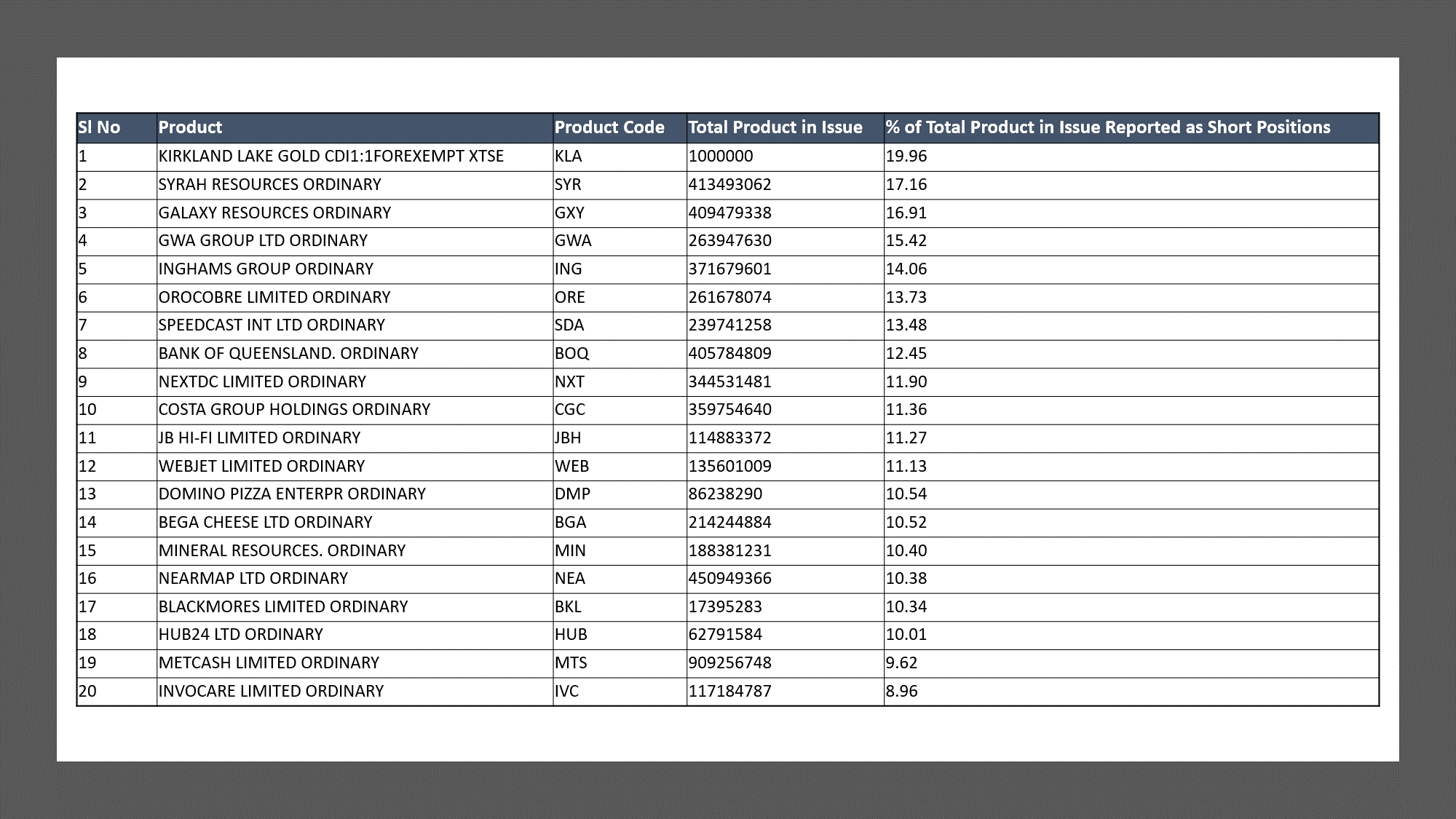