Is The Earnings Season Keeping The Market Volatile?

The Australian equity market is amongst the global limelight currently amidst global trade concerns, mixed developments on domestic macro indicators and market enthusiasts eagerly analysing and awaiting the earnings reports and outlook announcements of the ASX-listed companies during the reporting season.

Slumped start to the day’s trade

By the close of the trading hours on the ASX on 7 August 2019, CBA quoted A$78.700, sliding down by 1.38 per cent, driven by the weak results for the quarter. However, on a good note and after a weak start to the day driven by CBA’s slide, the fellow four-pillar banks closed higher.

The National Australia Bank Limited (ASX: NAB) was marginally up by 0.7 per cent at A$27.690. Westpac banking Corporation (ASX: WBC) followed suit by closing 1.08 per cent up at A$28.03 whereas the fourth major bank, Australia and New Zealand Banking Group Limited (ASX: ANZ) quoted $26.930, up by 0.789per cent, relative to the last trade.

An added baggage to the saddening stock saga has been the much spoken about US and China tussle, which seems to heighten after President Trump signalled 10% tariffs on $300b of consumer-focused goods and China’s rebuttal through ceasing purchase of any US agriculture products. The tension has aroused investing turmoil, with several investment houses unwilling to conclude deals before the 2020 US presidential elections.

As per economists, US aspires to use trade as a policy initiative While, China is awaiting the weakening of the US economy to leverage off economic fragilities as a policy miscalculation. Market experts believe that the US-China relations would further deteriorate, with tariff to increase on all Chinese imports.

Amid the aggressive tariff war, the Australian stock market has fallen prey, depicting lower returns right at the beginning of the reporting season. Market experts believe that earnings would keep the markets volatile for a while. Even when the share space is game for a rebound session, the next few days bear uncertainty.

The ASX hit record highs this season, and this leaves even more scope for volatility to consistently persist. On a good side, given the Australian dominance in the world’s equity market, the majority of stocks opened higher on 7 August 2019, as investors took advantage of depressed prices and stocked up on the available cheaper stocks.

Where does ASX stand in the global relief rally?

S&P 500, the Nasdaq Composite and the Dow Jones Industrial Average rallied up by 1.3 per cent, 1.4 per cent and 1.2 per cent, respectively on 6 August 2019. Investors awaited the Australian shares to follow the suit as these markets stabilised to recoup their losses after a huge sell-off.

However, Australian equity market depicted an unhealthy sign and a cause of concern for market enthusiasts trading lower in the early morning session. The Index was the underperformer in comparison to the other indices across the globe. It settled at 6519.5, down 0.6% on 7 August 2019.

Although a technology boom has been lifting Australia’s economy and equity market this season, the pattern was slightly lopsided today as the tech-savvy companies did not have the best of their days on ASX. The S&P/ASX 200 Information Technology (Sector) slid by 1.5 basis points or 0.12 per cent at 1,248.1 points, even though the day had begun well for the sector.

The resources and energy sectors were the other two sufferers, sliding down by 0.07 per cent and 0.69 per cent, respectively. Besides these, the other sectors upscaled their performance.

By the close of the trading day, the ASX closed higher with the Australian dollar recorded to be at a 10-year low. 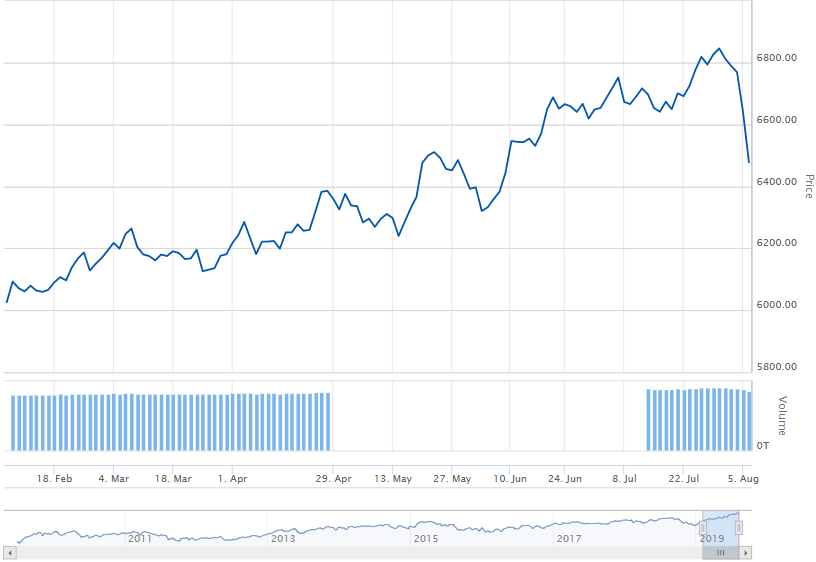 Gains and Declines of the Day

The top 3 gainers of the day, who may have largely boosted the ASX upswing in the stock market performance and fostered a good day for the investors included Resolute Mining Group (ASX: RSG), leading the pact up by 8.70 per cent at A$2.060, followed by Pinnacle Investment Management Group Limited (ASX: PNI) and Regis Resources Limited (ASX: RRL),moving up by 8.43 per cent and 6.22 per cent to quote at A$4.63 and A$5.98, respectively.

According to official sources, China is due to release its balance of trade figures on 8 August 2019. It would be interesting to watch out for the consequences that the release sheds in the business world and in the Australian economy.