Health care sector in Australia is growing tremendously and players are investing a considerable amount in their research and development for providing new treatment for rare diseases and finding therapies for unmet medical needs. Clinical studies advance medical knowledge and provide benefits to patients. The Australian health care system is primarily funded by Medicare. The Government in Australia is supporting health care companies and research organisations to invest in the research and development for providing better solutions and to find out treatment for rare diseases.

Many new pharmaceutical moieties enter the preclinical and clinical trial phase annually, but not all of them get approval from the regulatory authorities. The new drug molecule needs to provide appropriate efficacy and safety in clinical development.

In this article, we are discussing Starpharma, which has recently reported positive outcomes from the preclinical study for its compound DEPÂ® gemcitabine.

Letâs zoom the lens on this health care stock -

VivaGelÂ® is a proprietary dendrimer based on SPL7013 and is for womenâs health. VivaGelÂ® BV is available in the market of Europe and Australia for the treatment of bacterial vaginosis (BV). The company submitted a new drug application to the US Food and Drug Administration.

Dendrimer Enhanced ProductÂ® (DEPÂ®) showed reproducible preclinical utility across various internal and partnered DEPÂ® programs. The improvement in efficacy, safety and survival were observed in the preclinical study of DEPÂ®. As of now, the company has three DEPÂ® products (internal) under clinical development in patients with solid tumors- DEPÂ® docetaxel, DEPÂ® cabazitaxel and DEPÂ® irinotecan.

Starpharma has licensed VivaGelÂ® BV for sales and marketing to: 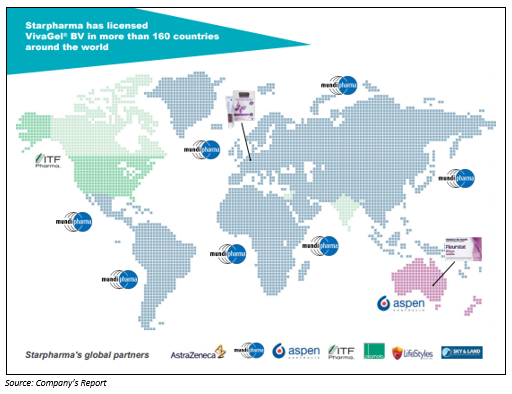 Cashflow: Through an ASX update on 30 October 2019, the company released the Appendix 4C â Quarterly Cashflow Report for the quarter ended on 30 September 2019. According to the announcement-

Starpharma is due to conduct the 2019 AGM on Thursday, 21 November 2019 at Melbourne, Australia. The resolutions to be considered during this meeting are-

In early October 2019, Starpharma unveiled to have received initiation to present at the US Drug Delivery Conference in Boston in the US, on 7-8 October. VP of Research Dr David Owen was scheduled to represent the company during the conference and highlight the benefits of the DEPÂ® platform including-