Nickel emerged as a base metal with resilient demand with price averaging USD 14,927 a tonne during the September 2019 quarter amid unexpected production outages and Indonesiaâs announcement of an export ban to be introduced in 2022, which has supported ASX-listed nickel stocks as the miners have commenced the expansion plans to take advantage of the rise in nickel prices.

Nickel prices were deeply supported by the fall in stocks across the LME (London Metal Exchange) registered warehouses with LME stocks reaching lowest level in six years, which kept the market undersupply for the fifth year. 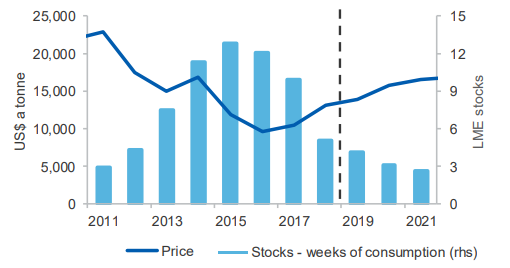 The global consumption of nickel remained relatively stable despite the ongoing bilateral trade tensions between the United States and China. During the first half of the year, the world refined nickel consumption surged by 4.6 per cent on Y-o-Y basis. China, which is the worldâs largest nickel consumer amid high use in the steel industry, supported the global consumption during the first half of 2019 with a 9.4 per cent Y-o-Y increase.

The Australian Department of Industry, Innovation and Science (or DIIS) anticipates the global consumption to grow at an average of 3.3 per cent to stand at 2.6 million tonnes during 2021 against the consumption of 2.3 million tonnes in 2018.

The DIIS further forecasts that nickel consumption would increase by 2 per cent on an average, a year in China with engineering and manufacturing activity in other markets like the United States, Japan, etc., supporting further demand.

The Indonesian Government announced in late August that the nation would ban the export of nickel ore from January 2020, which immediately impacted the prices of nickel in the global market and holds a potential to change the fundamentals of the nickel market, as Indonesia is the top supplier of nickel ore for the steel industry.

Indonesia, which exported about 120,000 tonnes of nickel during the first half of 2019 and accounted for 26 per cent of the overall global production in 2018, could remove about a 10 per cent of nickel ore from the world market with the ban.

Australia is the sixth-largest nickel miner in the globe with a production of over 200,000 tonnes a year, which accounts for 10 per cent of the world nickel production.

Nickel mined production soared by 14 per cent on a Y-o-Y basis during the September 2019 quarter amid the ramp-up in production by the Australian miners to take advantage of the price increase.

Ahead of 2021, the nickel production could further increase supported by the Yakabindie operation of the Australian giant- BHP Group Limited (ASX: BHP), which is expected to commence in late 2022 as well as the potential restart of Black Swan Mine owned by Poseidon Nickel Limited (ASX: POS).

The refinery nickel production in Australia is anticipated by the DIIS to grow at 9.1 per cent a year to stand at 141,000 tonnes in 2020-21 against the 2018-19 production of 114,000 tonnes with de-bottlenecking projects expected to support the growth. 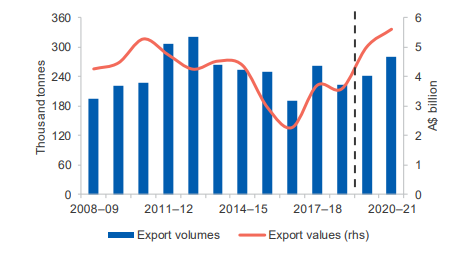 Nickel Expansion and Restart Plans of the Australian Miners

Mincor Resources NL (ASX: MCR)- the Australian nickel miner recently raised $35 million to support the nickel development and exploration momentum at the Kambalda prospect. Apart from a successful placement of $30.0 million (before costs) to strategic investors, institutions and other sophisticated and professional investors, the company planned for a Share Purchase Plan (or SPP).

The Share Purchase Plan would be closed once the company raises $5.0 million, and the existing shareholders of the company, Independence Group NL (ASX: IGO) and Squadron committed a further $2.0 million and $7.2 million, respectively.

The company intends to accelerate the development and expansion of regional high-grade sulphide at the Kambalda mining district, and also a Definitive Pre-Feasibility Study (or DFS) is planned for March 2020 quarter.

Likewise, many other nickel miners on ASX such as Independence Group NL are either expanding the production capacity or restarting the developments across their prospects to take advantage of the current high nickel prices, and also to take a leap with the change in global demand trend for nickel.

Once again, the Australian miners seems to be competent with their ability to produce and focus on right commodity, in terms of higher expenditure, and at the right time.

To Know More, Do Read: Are ASX Resource Stocks Producing Right Commodity at the Right Time?