In North America, Pogo is the key asset of the company, which is a gold endowment of 8 million, and NST claims it to be the next Jundee Operations.

NST upgraded the plant processing capacity, which now stands at 2.4 million tonnes per annum, and with that the production guidance for the financial year 2019 stands in the range of 280,000-300,000 ounces with an AISC of A$895-A$980 per ounce.

NST planned the A$15 million exploration drilling for the second half of the financial year 2019 and mobilised four additional rigs to the site.

NST sold 262-kilo ounce of gold in the financial year 2018 from the prospect with an AISC of A$1,174 per ounce. The Mineral Resources of the prospect stands at 8.6 million ounces, while the Ore Reserves stand at 2.3 million ounces.

NST is inching up its resource and reserves steadily from the Mid-year 2012 and delivered value accretive organic and inorganic growth. 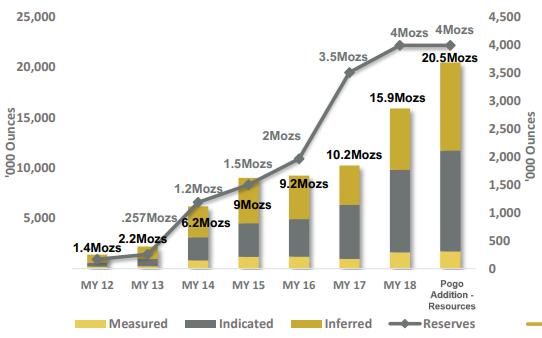 The reserves and resources grew on a per share basis as well, and over the last seven years, it progressed significantly. 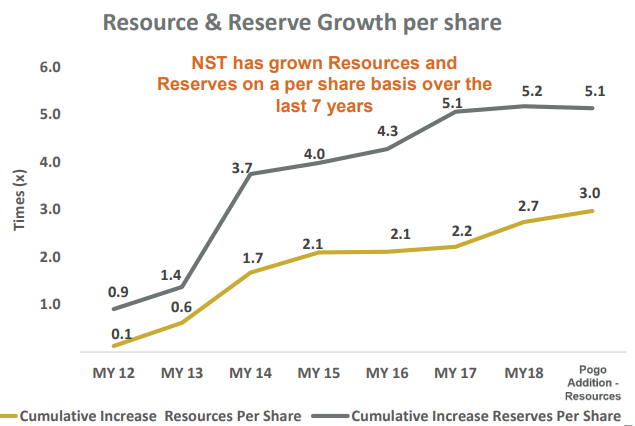 GOR is an Australian Securities Exchange listed gold miner, and the key asset of the company is its Gruyere Project. GOR is a fully-funded newbie with a 50 per cent Joint Venture with Gold Fields.

The current mine plan of the company is to inch up the production capacity and reduce the All-in-sustaining cost. 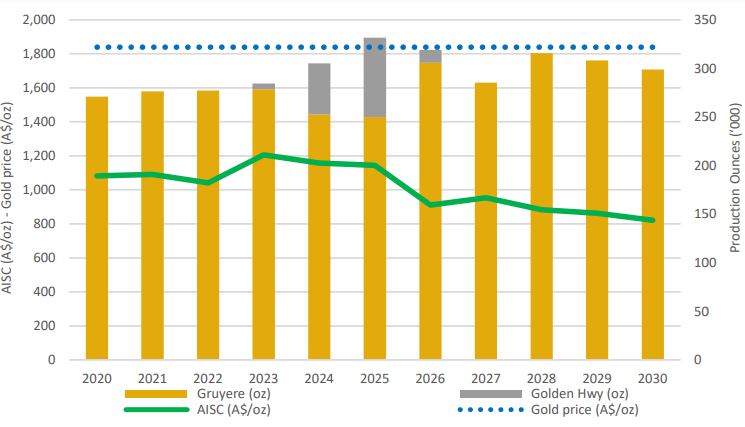 In an announcement today on ASX, GOR mentioned that the company poured first gold bar at the Gruyere Gold Project from the Carbon-in-Leach (CIL) circuit. The company produced three dore bars, which totalled 1139 ounces from the CIL and elution circuits.

As per the company, the less complex gravity circuit is underway, and now GOR would focus on commissioning the bill mill, which is among the final components of the process plant. The ball mill is estimated by the company to mark a completion in early September 2019 quarter.

The gold production would continue until the ball mill is fully functional, and once operational it would be integrated into the circuit. To reduce the gold losses associated with lower recoveries during the initial production phase, GOR plans to utilise low-grade ores during the commissioning and initial stages of ramp-up.

Once the ball mill becomes operational, that would mark the starting of an anticipated ramp-up period of 6-7 months. The Gruyere Joint Venture is forecasted by the company to attain commercial production in the mid-way of the ramp-up period.

IGO is an Australian multi-commodity miner with core operations in non-operator gold mining such as Tropicana Gold Mine.

The current mine life is of 8 years, and in the financial year 2019 the Tropicana Gold Mine inched up the production while lowered the costs. 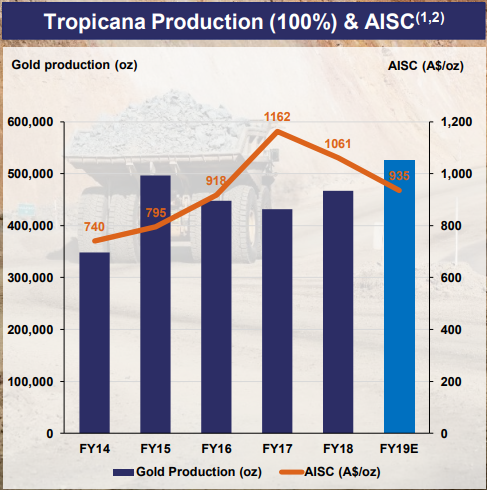 The Resource and Reserve Profile:

The total Mineral Resources at the Tropicana Gold Mine stand at 7.70 million ounces, while the complete Ore Resource at the prospect stands at 3.74 million ounces.

In a nutshell, the recent gold rush supported by global uncertainties, supported the gold miners, and the stock price of the gold miners climbed up the ladder to reach their respective 52-week highs; however, post the recent events, the gold prices are correcting as global cues are improving, which in turn, is further dragging the gold miners down along with it.