2020, investors and stakeholders wait for the December ended quarterly results to analyse the business performance in the past and to gauge the outlook via the company's guidance lens.

New Century Resources Limited (ASX: NCZ) is an Australian based mining company. It holds Century zinc mine in Queensland and Kodiak coal project in Birmingham of U.S. state of Alabama. NCZ is one of the lowest C1 cost zinc producers to become one of the top ten largest zinc producers in the world.

The zinc production increased by 7% to 28,123t in the December quarter 2019 in comparison to the previous quarter. The rise in output was due to the improved recovery since mined grade has fallen from last quarter, i.e. 2.96% to 2.87% of zinc grade and concentrate grade remained the same hovering around ~49%.

Whereas cash cost increased by 3% quarter on quarter (Q-o-Q) to reach USD 0.96 per pound in the December quarter 2019.

The focus of this quarter was the commissioning and stabilisation of upgraded scavenger circuit in the processing plant, which was achieved three weeks ahead of schedule and on a budget in October 2019.

Also, the company is almost near to the planned capital expenditure program for the expansion of the plant to 12Mtpa. Around 73% of progress has already been achieved with ~A$13 million kept for FY20 for development and sustaining capital expenditure.

Bellevue Gold Limited (ASX: BGL) is an Australian listed mine developer with the aim of advancing Bellevue Gold Mine in Western Australia, once producing mines with the highest grade of 800,000oz @ 15g/t gold between 1986 to 1997.

Development Update: During the quarter, the company appointed Mr Craig Jones – a highly-skilled underground (UG) gold mining professional with more than 26 years of experience for the role of Chief Operating Officer (COO) to lead the team for the advancement of the Bellevue projects from exploration to feasibility and development.

BGL commenced dewatering and re-launch of access to the historic UG Bellevue mine workings. The water from UG is being transferred to the existing open pits via pump and water canon is being used to accelerate the process of evaporation.

Exploration Update: During the quarter, up to eight rigs were operated, and a total of 29,000 m of the 80,000 m diamond core drilling was completed. The drilling targeted on infill areas to upgrade to the higher indicated category along with step-out drilling to grow the current global inferred resource. 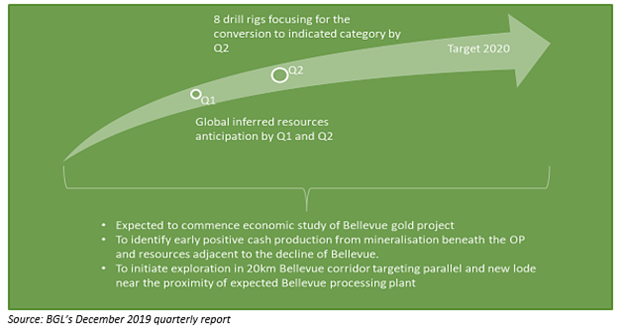 The company’s quarterly production was a track record of 68.519 kilo ounces of gold and 691 tonnes of copper.

The total mined resources were then sent to the processing plant to mill the total ore of 318,372 at 4.2g/t of grade and 93% recovery.

Whereas, Deflector mine too demonstrated high output of 28.665 kilo ounces of gold and 691 tonnes of copper. The mill throughput was in the range of 163,240 tonnes, i.e. almost similar to September quarter; however, the increased mill head grade from 5.0g/t to 6.2g/t has led to the increased production of gold keeping recovery almost constant.

Copper had constant MHG of 0.5% in comparison to the previous quarter and shown a small increment of metal recovery from 93% to 93.48% in the December quarter.

Exploration and Finance: SLR invested $7.6 million in group exploration, focusing high-grade projects. In December quarter, the company's balance sheet has improved by $31 million, i.e. 20% to $186 million at the quarter-end. Also, to increase the company inventory, SLR acquired the Egan Street Resources to support increased life of mine of Deflector.

The guidance for FY20 has also been revised seeing the better recovery of grades across the mines of the company. 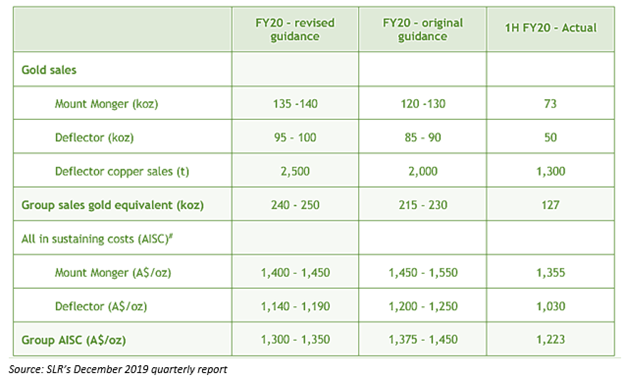 To know relation between Gold and Bitcoin, please read: Demystifying Bitcoin-Gold Relation: What Investors should expect?