S&P/ASX 200 Telecommunication Services index at the time of writing was trading at $1309.60 on August 23, 2019 (16:00 UTC+10). It recently made a fresh 52-week high level at $1380.40 on July 30, 2019, and since then it has corrected by ~5.13%. Recent developments in the telecom space comprise fifth generation (5G) wireless technologies, which would change the way of working of voice-assisted technologies, Internet of Things (IOT), Artificial Intelligence, etc. Four important companies in telecom sector are Vocus Group Limited (ASX: VOC), Telstra Corporation limited (ASX: TLS), TPG Telecom Limited (ASX: TPM) and Amaysim Australia Limited (ASX: AYS).

Telecommunications Service Provider Vocus Group Limited (ASX: VOC) operates in Australia and New Zealand markets. On August 22, 2019, the company announced its results for the full year ended June 30, 2019.The company met its previously issued guidance and laid the foundations to drive growth by exploiting market opportunities. Companyâs core business Vocus Network Services recorded growth with recurring revenues increasing by 5% year over year, total revenues increasing by 23% and underlying EBITDA by 5%. The recurring revenue growth was generated primarily through companyâs State and Federal Government businesses, the demand generated across the network by the Australian Singapore Cable and a strong performance in the Wholesale business.

The Australia Singapore Cable unlocked the capacity bottleneck from Australia to Asia as soon as it became operational in September 2018. Strong sales growth has been achieved and it is driving additional traffic on the domestic network. The Coral Sea Cable project, being built by Vocus on behalf of the Australian Government and connecting the Solomon Islands and Papua New Guinea with Australia, is progressing as per schedule and within the estimated costs. Although the Retail business saw a 15% decline in revenues, EBITDA margins increased 1.8% due to its digital transformation program, operating cost efficiencies, and improved supplier terms. Vocus New Zealand delivered another strong performance, augmenting revenue by 4.5% and EBITDA by 2.5%. 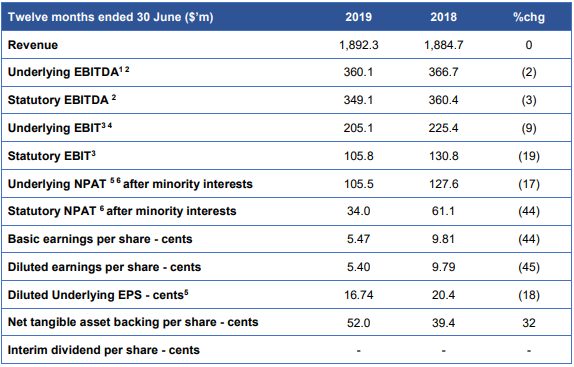 Telstra Corporation limited (ASX: TLS) is involved in providing telecommunications and information services, catering to domestic as well as global clients. The company recently announced that it reached $1 billion in asset monetisation. Vicki Brady, TLS CFO, while addressing investors announced the establishment and part sale of an unlisted property trust to own 37 of the companyâs existing exchange properties. This agreement shows continued progress the company is making against the fourth pillar of its T22 strategy to monetise up to $2 billion of assets in order to strengthen its balance sheet. As part of the transaction 49 % stake in the new property trust will be acquired by a Charter Hall-led consortium for $700 mn, reflecting a capitalisation rate of 4.4 %. The value of the entire property trust has been estimated at $1.43 bn. The company would be retaining ownership and operational control of the properties, with 51% stake in the property trust. The company would be signing long-term triple-net leases with the property trust, which will have expiry of 21 years (under weighted average method). The company is also executing the sale of part of its portfolio of data centres in Europe and Asia. Additionally, through the sale of the Edison Exchange building in Brisbane and other smaller transactions, the total assets value monetised under T22 would be ~$1 Bn.

TPG Telecom Limited (ASX: TPM) is involved in providing the wholesale and corporate telecommunications services. On May 8, 2019, the company informed the market that the Australian Competition and Consumer Commission (ACCC) announced that it will be opposing the proposed merger of TPG Telecom Limited and Vodafone Hutchison Australia Pty. Ltd., via a Scheme of Arrangement. However, Vodafone Hutchison and TPG Telecom, remain committed to the proposed merger, and have filed aresponse to the ACCC decision on May 24, 2019.

The term of Scheme documents have been extended by both the parties till August 31, 2020, which will give sufficient time for the Federal Court process to conclude.

As per the release, the merger is expected to bring great benefits to consumers, as Vodafone Hutchison is a reputed mobile business with less than 1% of the fixed broadband market, while TPG is the 2nd largest fixed broadband player in the Australian market with no mobile network. However, both the companies respect the ACCC process and they would wait for the approval of the merger through the Federal Court.

The impairment expense for the period was reported at $227.4 Mn, due to the Groupâs decision to cease the rollout of its Australian mobile network. The period reported one-off transaction costs worth $4.4 million, concerning the merger with Vodafone Hutchison Australia.

Groupâs net operating cashflow after tax for the period was reported at $333.0 Mn. The total Capex stood at $556.7 Mn. The capital expenditure amount included $352.4 Mn instalment for the 2x10MHz of 700MHz spectrum acquired at auction in 2017 and $39.8 Mn in the Singapore mobile network build. Moreover, $66.1 Mn invested in the (now ceased) mobile network build in the country was covered in the capex. Groupâs net debt (excluding outstanding spectrum liabilities) at the end of the period was reported at $1,567.6 Mn. 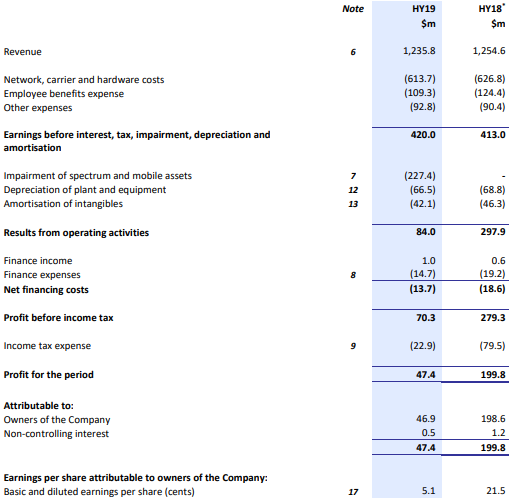 Amaysim Australia Limited (ASX: AYS) is a provider of mobile telecom as well as retail energy services. The company recently made an announcement regarding change in stake of one of its substantial holders, where Investmentaktiengesellschaft fur langfristige Investoren TGV increased its voting power from 18% to 19.19%, effective from August 12, 2019. In another update, the company highlighted that it will announce its full year results for the financial year 2019 on August 26, 2019.

H1FY19 Key Highlights: Companyâs net revenue decreased by 5.6% over the corresponding prior year period to $263.0 million. The underlying EBITDA increased by 32.2% over the year-ago period to $29.2 million, where mobile underlying EBITDA decreased by 4.6% to $10.6 million and energy underlying EBITDA increased by 69.2% to $18.7 million over the same period. The net loss after tax from continuing operations for the period was reported at $4.8 million driven by an impairment charge related to energy customer contract and distributor relationship intangible assets. The net debt at the end of the period was reported at $20.4 million from $59.4 million in the previous half-year period. 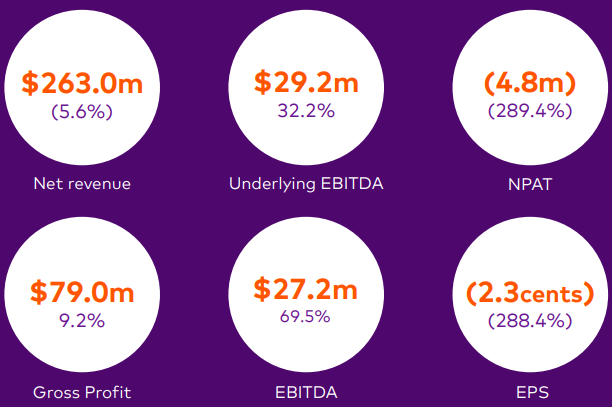