The financial system of Australia remains strong and its ability to resist shocks continues to improve. The financial service sector of Australia is the major contributor to the national economy. The sector contributed approximately $140 billion to GDP over the last year period and acted as a major driver for economic growth. The financial sector employs around 450,000 people and would remain to be the main sector of the economy in the future. Also, the Australian financial sector has always been the investors number one choice, since the sector is sophisticated, competitive and profitable. 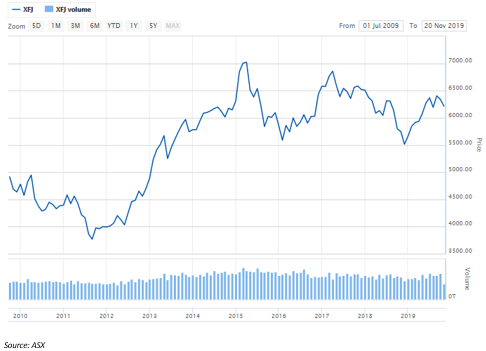 Below discussed are five companies from the financial sector, let us have a look at their stock performance on the ASX and recent updates.

Magellan Financial Group Limited, founded in 2006, is a fund managing company. MFG helps to generate generous returns for their clients by investing their money into global listed infrastructure and global equities.

Calendar for the Major Events of 2020

QBE Insurance Group Limited, headquartered in Sydney, Australia is an ASX listed company with more than 12,000 people employed in 31+ nations. The company provides commercial, personal and speciality products and risk management solutions to its consumers.

ASX Limited is one of the leading financial market exchanges worldwide. ASX operates as the universally appealing liquid financial markets and is counted as a top 10 global securities exchanges by value with a total market cap of approximately $2 trillion.

On 6 November 2019, ASX reported the monthly activity report for the month of October, a few highlights from the report are as follows:

The ASX announced a final dividend of 114.3 cents per share (cps), with an increase of 4.8%, bringing total ordinary dividends (interim and final) for FY19 period to 228.7 cps, up by 5.7% on pcp. The dividend declared by the company is fully franked, and it mentioned that 90 per cent of the underlying profit were being paid in dividends.

On 14 November 2019, the company has declared the results of Annual General Meeting. Below mentioned resolutions were passed during the meeting:

On 6 November 2019, MPL provided additional information regarding its full-year 2020 outlook. The claims received by the company were higher than expected. Medibank has $21 mn as per provision via the 30 June 2019 claims reserve. It shows that the underlying claims growth/policy was 2.4 percent in financial year 2019 period against 2.0 percent noted during the full year period. These higher claims have been propelled, by numerous reasons, and majorly by increased hospital payments. The company expects management expenses to be around $545 million for FY20 period.

The company FY 2019 results can been read here

Janus Henderson Group plc is an active asset manager. The company employs more than 2,000 employees globally and has 28 offices located all over the world.

On 13 November 2019, the company announced that it has completed its on-market share buyback programme. Under the programme, the Company has bought back and cancelled 9,437,071 of its ordinary shares of 1.50 US dollars each (Shares), of which 2,330,470 were CHESS Depository Interests (CDIs) which have been converted into Shares and cancelled. Janus Henderson has expended a total amount of US$199.9 million under the Buyback, of which A$71.7 million (or US$49.5 million) was expended on buying CDIs.