Federal Reserve Chairman Jerome H. Powell presented the semi-annual monetary policy report to the Congress on 10 July 2019, signalling towards a rate cut by the end of the month, factoring in increased uncertainties about the United States economic outlook in recent months. The Federal Reserve is the central bank of the United States, responsible for providing a stable, safe and flexible monetary and financial system to the country.

During the central bank’s policy statement to the Committee on Financial Services, U.S. House of Representatives, Washington, D.C., Powell cemented the case for the US central bank to lower borrowing costs to prevent a slowdown in the economic expansion of the country. The US Federal Reserve as well as Powell are already under high pressure from President Donald Trump for monetary easing, as the President is openly asking banks to lower their interest rates to stimulate growth amid economic uncertainty due to the ongoing trade war between America and China. If the Federal Reserve announces the rate cut, it would be the first monetary easing in more than a decade.

Economy of the United States is currently in the 11th year of expansion. GDP or Gross Domestic Product grew by 3.1 per cent in the first quarter of 2019, compared with an increase of 2.2 per cent in real GDP in the last quarter of 2018, according to data released by the US Bureau of Economic Analysis, reflecting increase in consumer, state and local government spending, as well as exports and business and inventory investment.

Below figure depicts the GDP growth trend on a quarterly basis. 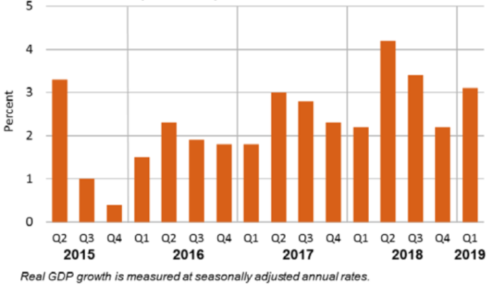 Labour Market: United states labour market is preforming well. During the first six months of 2019, addition of new jobs remained above the pace required to provide employment opportunities to new workers entering the labour force. Owing to which, unemployment rate fell to 3.7 per cent in June 219 from 3.9 per cent in December 2018. 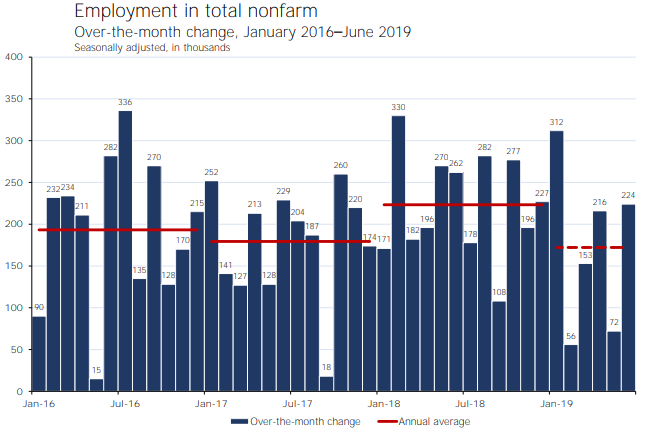 However, job gains were uneven for several Americans, resulting in challenges for individuals in some demographic groups, as well as in some regions. During the reported period, unemployment rates for African Americans and Hispanics were high when compared with unemployment rates among whites and Asians. Additionally, population share for individuals with a job was higher in urban regions when compared with those in rural areas.

Consumer Price Inflation: The Consumer Price Index for All Urban Consumers (CPI-U) in the US grew 1.6 per cent for the one-year period ended June 2019, still below the 2 per cent objective of the Federal Open Market Committee (FOMC). For the 11 months ended May 2019, CPI-U increased 1.8 per cent. 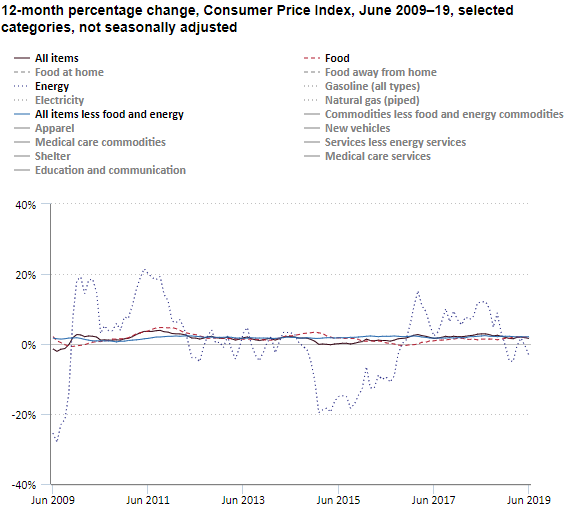 Moreover, in the first quarter of the current year, both housing investment and manufacturing output reported a decline.

US Economic Growth Outlook: According to the baseline outlook by the Federal Reserve, unemployment rate would remain below its long-term level and the economy would continue to remain solid, with inflation moving back to its 2% target over time.

Though the United States economy performed well during the first half of 2019, weak economic momentum in some of the major foreign economies, along with unresolved government policy issues like Brexit and trade developments might affect the US economy and result in a risk of more persistent and weak inflation than anticipated.

Growing risks to the economic outlook and weak inflation might prompt the central bank to adjust its monetary policy against the 2.25 to 2.50 per cent target range in the first half of this year. Moreover, several participants of the committee are of the view that the scenario for a more accommodative monetary policy is strengthening.

Determined to act as appropriate to sustain the expansion, the Federal Reserve is currently carrying out a public review of its monetary policy strategy, along with tools and communications. This is also the first assessment of this type for the Federal Open Market Committee. The Federal Reserve is scheduled to meet on 30-31 July 2019 and is expected to be in line with the market view of reducing borrowing costs.

Meanwhile, several market experts are betting that the US Federal Reserve will come up with monetary easing in late July 2019, lowering its main interest rate by a minimum of 25 basis points from the current level.

Impact of Fed’s Latest Statement on the Market: Latest statements of Federal Reserve Chairman Jerome H. Powell indicated towards a cut in interest rates in the near future were taken positive by the market, as any rate cut would result in more liquidity in the market. Dow Jones Industrial Average and S&P 500 Index, since the Fed chief signalled towards a rate cut, reported a 2 per cent increase to make new all-time highs.

So far in 2019, equity investors enjoyed strong gains, as the S&P 500 registered a 20% increase and the MSCI All-Country World Index grew 16%. However, several market experts are of the view that upside for global equities would remain limited from the current levels, predicting a maximum of eight per cent growth in growth equities, provided bond valuations maintain the gains reported during the first half of 2019 and investors become the most overweight since September.

Even though the rate cut is announced, global equities are unlikely to go above eight per cent, owing to the absence of recent flows into equity funds and earnings revisions not bottomed out, as per certain market analysts.

So far in 2019, Australia witnessed various ups and downs. Let us have a look at some of them:

1.Interest Rate Cuts: Two back-2-back cuts in benchmark rates by the Reserve Bank of Australia (RBA) since the beginning of the year provided some relief to the sluggish economy of the country. The Australian central bank introduced the first interest rate cut in June 2019, while the second cut bringing the interest rate to an historic low of 1 per cent was unveiled in early July 2019. Through these cuts, which are also the first official rate cuts since 2012, the RBA is aiming to lower unemployment rate levels and support the economy. According to market experts, the RBA would announce further rate cuts before the end of the current year to get the inflation target on track.

2.Coalition Win: The Liberal-National Coalition got re-elected in Australia’s federal election held in May 2019. Prime Minister Scott Morrison declared victory over the opposition Labor Party. Strengthening of the Australian economy and a tax cut package of $ 158 billion were the main agendas of the coalition.

3.Housing Market Slump: Australia is witnessing consistent downfall in prices in its housing market. Housing prices across the country fell 7.3 per cent in terms of weighted average, over the last one year.

United States is the largest economy by GDP in the world. Banks trade on the weakness and strength of the US dollar. Thus, if anything happens to the US economy, it ripples the global economy. Australia also has a close relationship with the United States, which is its leading investor. These two countries have $ 1.47 trillion of the two-way investment. Any policy change in the United States is likely to have an impact on the global market as well as on the Australian market.