We have screened few stocks which have been paying regular dividends to their shareholders. Let’s take a look at these stocks and their recent updates.

In November 2019, the company released its Investor Day presentation, wherein it informed that it expects its total operating expenses - excluding restructuring costs and impairments - to decline, with reductions in underlying fixed costs to offset increased NBN (National Broadband Network) network payments and other variable costs and expect additional restructuring costs of around $300 million associated with T22 in FY20. Telstra also expects to decrease its underlying fixed costs by a cumulative $2.5 bn by FY22, relative to FY16.

During FY19, the company declared a total fully franked dividend amounting to 16 cents per share. This implies that the company has returned $1.9 billion to shareholders in the form of returns.

The company established a strategic capital partnership at Aura, a $5 billion masterplanned community on the Sunshine Coast, at a 30 per cent premium to book value, with Capital Property Group. Further, the company made good progress divesting its non-core retail town centres with $505 million of transactions, six to twelve months sooner than forecast.

The company continues to reallocate capital into its workplace and logistics pipeline and re-stock its residential landbank with expected returns on investment well above its weighted average cost of capital, positioning it for sustainable profit growth.

The company is confident that the residential market has bottomed and the pace of recovery is improving, particularly in Sydney and Melbourne. The default rate, while still high, is expected to reduce over the balance of FY20 to normalised levels.

The company has also announced the appointment of Mr. Terence Bowen to the Transurban Board as a Nonexecutive Director, effective 1 February 2020.

The primary activities of Washington H. Soul Pattinson and Company Limited includes Investment, coal mining, pharmaceutical, telecommunications, building materials. At the recently held 2019 Annual General Meeting, the company highlighted that that it has an excellent track record of paying dividends and actively manages its portfolio to achieve its goal of paying a steady and increasing dividend over time. Every year since 2000, the company has increased both its interim dividend and final dividend.

The company has claimed that it is one of only two companies to do this of the 500 odd companies in the All Ordinaries Index. For FY19 (year ended 31 July 20190, the company declared total dividend of 58 cents, up 3.6% on last year. In FY20, the company intends to pay out 82% of the net regular cash inflows from operations as dividends. 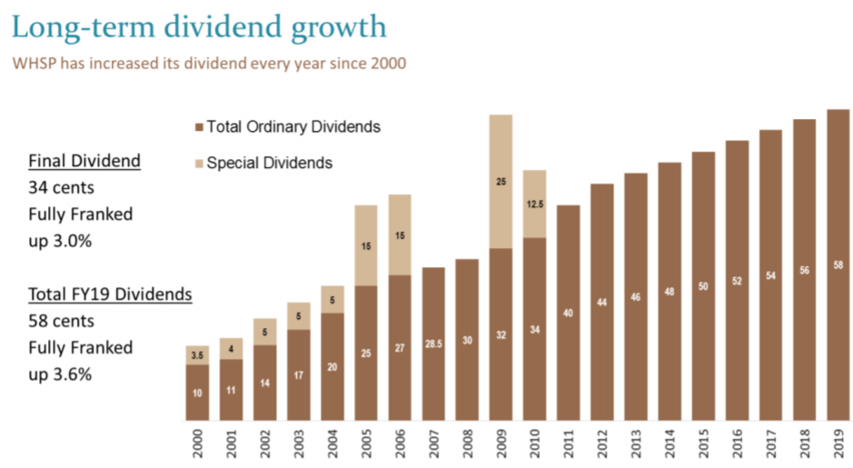 Sydney Airport delivered a solid traffic performance across the calendar year 2019 despite of tough trading conditions. In December 2019, the company witnessed domestic passengers growth of 1.3%.

How is Sydney Airport revolving?