nib’s Managing Director, Mr Mark Fitzgibbon, suggested the government to pay the health insurance premiums of only those Australians that are unable to afford it. The Labor party also rejected the nib’s idea, calling Medicare as a key to Australia’s health system.

However, the healthcare scheme does not cover private patient hospital costs, medical and hospital costs incurred overseas, ambulance services and medical services which are not clinically necessary.

Why nib is Demanding Abolishment of Medicare?

According to nib, the private health insurers in Australia are facing challenges amid the monopoly enjoyed by the government through the Medicare system. Mr Fitzgibbon believes that the private health insurance industry will face a tough future with the narrowing ratio of taxpayers to retirees and the ageing population. More and more people are relying on Medicare in Australia, and the private insurance is becoming out of reach. In the wake of the current situation, Mr Fitzgibbon thinks that there is a better way to deliver more efficient and fairer universal healthcare services.

Let us have a look at some of the health insurance companies listed on the Australian Stock Exchange in some detail below:

In May this year, the Group informed that it has concluded the purchase of QBE’s travel insurance business at a final purchase price of $24.2 million. Mr Fitzgibbon stated that the acquisition has strengthened the nib’s position in the domestic travel insurance market. According to him, as over 60 per cent of travel insurance claims are health or medical-related, it allows the nib’s travel business to tap into the Group’s hospital and provider networks.

The Group posted its financial results for the six months to 31 December 2018 in February this year. nib declared an underlying operating profit of 114.3 million dollars which was 18.6 per cent more than the previous first half result. The underlying revenue and the net profit after tax improved 10.9 per cent and 4.8 per cent to $1.2 billion and $74.3 million, respectively during the period. 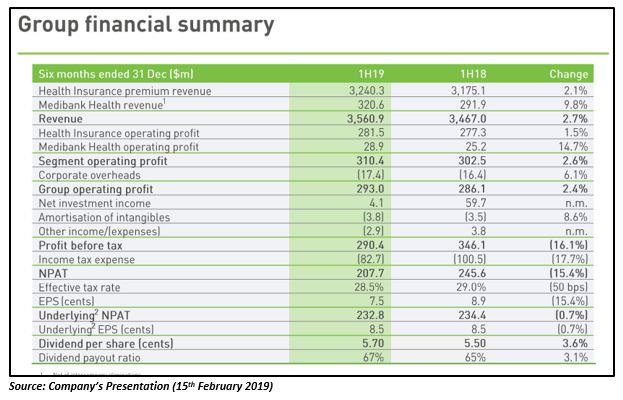 On 18th July 2019, the Group provided an update on its FY19 expected results and a strategic business update with a focus on 2H FY19. The Group reported an expected Underlying NPAT of $25.1m for the year ended 30 June 2019. The Group has completed an IT strategy review and material cost transformation program in 2H FY19. Also, it has terminated a few poor performing life insurance distribution relationships, enhancing and repricing its wealth management and life insurance products.

The Group, on 27th February 2019, released a condensed consolidated financial report for the half year ended 31 December 2018. The Group reported a fall in the Underlying NPAT by 13 per cent to $13.3 million during the period against the HY18 figure of $15.3 million. Also, its Life Insurance Underlying NPAT was 5 per cent down to $11.9 million. 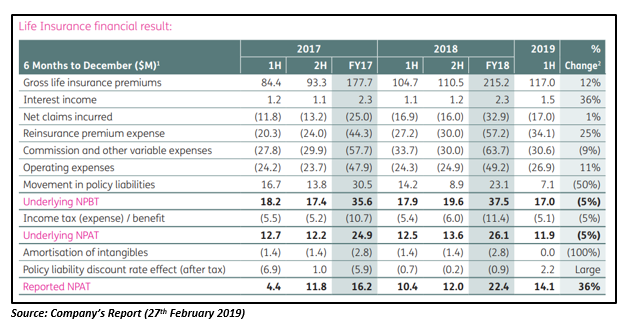 Recently, the company informed through an ASX announcement that the sale of AMP Life to Resolution Life is highly unlikely due to the condition precedent for Reserve Bank of New Zealand approval. AMP Life is the company’s ANZ’s wealth protection and mature businesses.

The company declared its Q1 19 cashflows update on 2nd May 2019 that highlighted that the Australian wealth management net cash outflows amounted to AUD 1.8 billion in Q1 19. The company informed that the AMP Bank increased deposits by AUD 218 million with a large growth in retail deposits during the period. However, the total loan book of the AMP Bank also grew by AUD 127 million to AUD 20.1 billion. AMP Capital reported 4% increase in AUM to A$194.6 billion majorly due to stronger investment markets.