On Wednesday, in the US, the Fed Reserve wrapped up its two-day monetary policy meeting, quantifying the level of potential economic damage.

Risk-off sentiments gathered pace and flight to safe haven assets was noticeable. However, the US jobless claims have continued to fall, coming down to 1.54 million in the week ended 6 June compared to the highest of 6.8 million claims in the week ended 28 March.

Many investors are varied from the market recovery as we have seen in markets since hitting extreme lows in March in one of the quickest successions. They noted that we are in a bear market rally, which seems appropriate as bear markets do exhibit volatility.

At the end of the day, markets like to embrace fundamentals of businesses, which – to a large extent – appears bleak as we are in the midst of a recession that many are saying is worse than the Great Depression of 1930s.

Since COVID-19 has accelerated the pace of themes that were supposed to play over the decade, concerns around global economy are increasing. Moreover, countries are also willing to revisit the issues in supply chains, globalisation and trade.

Although global trade was on a mute largely over the last decade, interdependency between nations for the factors of production is still extremely on higher side. As policymakers look to move supply chains out of the widely favoured places, actions will likely result in numerous second-order or third-order consequences.

Second-order and third-order consequences sometimes result adversely to the expectations. For instance – the celebrated Chinese leader, Mao Zedong once ordered to kill all sparrows in China as they were destroying crops and agricultural produce.

China suffered the worst famine in the following years, and millions of Chinese people died. The campaign was so powerful that birds were scared to land on ground and kept flying only to die because of exhaustion.

The irony was that birds are predators of insects, locusts, etc., which increased in numbers massively as their predator was off the hook. This resulted in massive crop damage, causing scarcity of agricultural produce, thereby leading to a great famine.

An intriguing part of the history tells us a number of consequences could be inflicted by preceded actions. Therefore, it is highly favourable to consider long term as well as short term implications of our actions.

Central banks have pumped in large liquidity into markets through buying bonds, mortgage backed securities, corporate bonds, etc. In layman terms, monetary policymakers are engaged in controlling risk-free rates that form a basis in determining the value of other asset classes.

In one way or another, the notion has been the same since the Great Financial Crisis, central banks have been buying asset classes when there is a dislocation in markets, thereby popping up prices of the asset classes.

Major banks are trading close to their book value, except for CBA

Australian big four banks have faced massive selloffs such that three of the four banks have traded close or below to their respective book values over the past few months. 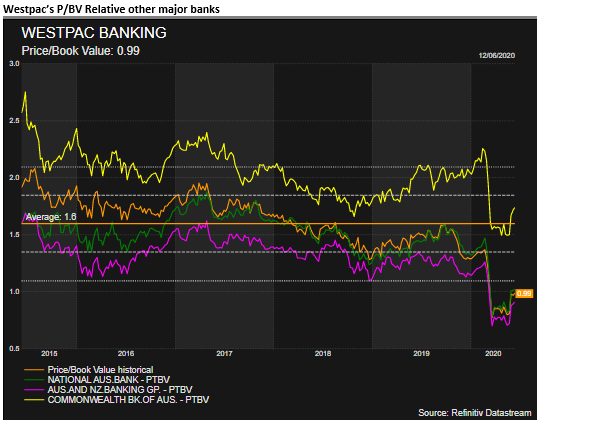 Australia has controlled the spread of infections relatively better than most of the countries, prompting policymakers to resume the economic activity in the country. Since the economic picture could be better than what has been expected previously, large-scale provisions incurred by the banks could be redundant to some extent.

Generally, technology sector trades at an expensive range, considering the widely used valuation fundamentals, and is always susceptible to value erosion when it comes to widespread sell-off in the markets. Investors often try to offload businesses that are still unproven and yet to report profits. But some technology companies have seen tailwinds, as a result of COVID-19.

Why is ASX relatively better placed than the US sell-off today?

First of all, the benchmark indices in Australia are still well below the all-time highs recorded earlier this year, and there has not been a sharp recovery in markets unlike the US. Australia has also been successful in containing the spread of the virus.

Fiscal position of Australia is better than most of the countries. And, economic recovery may well be on the way since the country is embracing softer restrictions. But the debatable question in Australia has been the impact on economy when Government halts its policy packages like JobKeeper and JobSeeker, among other measures.

In the US, recent large-scale protests and mass gatherings have cast doubts on the spread of coronavirus. A virus like COVID-19 could be transmitted rapidly when such type of large-scale gatherings with close contacts have taken place.

Moreover, it may be the case that the US markets are pricing the possibility of a second wave of COVID-19 infections, which could be counter-productive at a time when the country is easing restrictions and conditions are stabilising.