The mining industry is edging towards becoming the largest contributor to the GDP, closing the gap behind the health and education sectors. The mining sector is already the largest exporter and is projecting even higher export volumes to set a record of $282 billion in 2019-20, a 0.8% increase in value terms in comparison to the previous year even with weaker commodity prices.

With the trade tensions glooming industrial sectors, demand is further fuelling for precious metals across the globe. The setbacks in the available industrial capacity have begun to affect the commodity markets adversely.

With the demand from developed economies being stagnant, emerging economies such as Brazil, Russia, China, India and South Africa, most commonly known BRICS, with their thriving middle class would decide the demand growth in future. Any further decline in the Chinese growth would lead to severe repercussions to the commodity markets.

A considerable upsurge has been recorded in investments towards strategic minerals, especially in commodities used in energy storage and electric vehicle manufacturing. The precious and strategic mineral markets are countervailing the reduced demand for bulk commodities.

The prices cycled through the year crossing US$ 120 a tonne, scuttled to secure supplies in June as the port stocks fell, experiencing a hike and then again fell back in August by roughly 30% as Chinese restocked their port stockpiles and also due to increased supply from Vale’s Brazilian operations after the Brumadinho tailings dam failure.

The decrease in the supply of the high-grade ores from Brazil made the Chinese steelmakers switch to low-grade iron ores from elsewhere, thereby minimizing the high and low-grade ore spreads.

With Vale lowering the production outlook for the first quarter of 2020 to a range of 68-73 million tonnes and the port inventory falling to a ten-week low in early December, the iron ore prices may be monitored further. 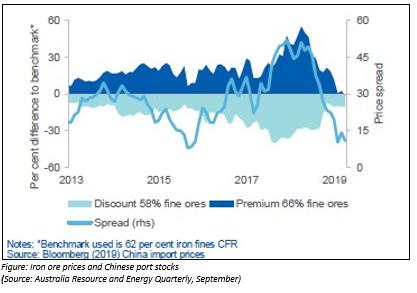 Fortescue, which is the world’s 4th largest iron ore company after BHP, Rio Tinto and Brazilian Vale, is soaring high this year. The US-China trade war has put the bulk commodity miners under stress, but Fortescue managed to record stronger earnings this year. The company’s stocks have been leading when compared to the other majors. The stock prices have benefited from both the substantial gains and the higher commodity prices and took the optimum advantage of the opportunity of the disruption in supply by Vale’s reduced capacity.

The lower stocks at the Chinese ports still enable them to increase production further despite Vale’s production stabilisation which would occur sometime in mid-2020. The more focus towards iron ore and lesser debt on its balance sheet still justify even higher values of the stocks in the future, depending on iron ore prices.

In December 2019, the miner touched the $10 share mark for the first time in a decade, making it as one of top stocks for capital gains this year.

The company added West Pilbara Fines, Fortescue Lump and Manganese iron ore to its portfolio, which observed good responses from the market. The company would frequently assess its product mix in the upcoming years to focus more on the high-value products and enhance revenues. The FY19 underlying EBITDA experienced an increase of 90% compared to FY18, reaching US$39 per dmt.

Fortescue’s excellent performance can be explained by-

As for FY20, the company plans to have 17-20 mt of shipments for West Pilbara Fines product, which would boost up the total shipment volume to 170-175 million tonnes. Total capex of US$ 2.4 billion has been planned, for which the company raised $600 million via a high yield bond to inject capital into future projects. The strip ratio estimates are 1.5 for the year, which would help to control the operating cash cost to the US$13.25-13.75 wmt.

The gold price on London Bullion Market Association (LBMA) reached a 6 year high of USD1,547 in September fuelled by the US-China trade tensions. Also, the weakening of the Australia currency provided long required momentum to the gold prices. The gold purchases by central banks observed a spike of 57.14% to 238 tons in 2019 vs 2018, as per the World Gold Council. The uncertainty over Brexit and civil unrest in Hong Kong show no signs of ending. The gold-backed ETF sales increased significantly to over 108 tonnes in H1,2019 offsetting the decrease from Jwelery and bars & coins.

With the trade dispute between the US and China to continue until the US presidential elections, the appetite for gold does not seem to be fulfilled in early 2020. Gold stocks reciprocated the commodity price rally but a few like Gold Road resources superseded it.

Australia expects to export record value ($25 Billion) of gold in 2020.

The company stock prices are on a rally since the beginning of the year. Gold Road owns a 50% stake in the Gruyere gold mine with the remaining stake held by Gold Fields. The company reported the maiden resource for the project in 2014 and published a pre-feasibility study in 2016. The project had concerns circling the financing of the project and ultimately, the miner had to sell 50% of the equity in the project to Gold Fields for $350 Million, and a 1.5% net smelter recovery up to 2 million ounces which cleared the air on the financing of the project.

Adding to the commodity prices, the company started its mining operations at the Gruyere gold mine, the only operating asset of the Gold Road Resources. Gruyere project has a mine life of 12 years with an installed annual capacity of 300 kilo ounces. The production capacity enables the company to enjoy economies of scale benefits. The mine uses the open cut mining method and operates its power plant for its electricity requirement which enables the gold miner to achieve an average all-in sustaining cost of US$ 745 an ounce. The operations would lie in the first quartile of the gold operations worldwide.

The company achieved its first gold pour in June 2019 and since then, has produced over 29 kilo ounces with AISC of $2,052 an ounce of gold.

The company is currently ramping up the production of the processing plant and intends to produce 75-100 kilo ounces of gold by the end of the calendar year 2019 with the all-in sustaining cost of $1,050-$1,150 an ounce. The mine schedule for the operation was also updated to now produce an average of 300 kilo ounces of the yellow metal each year.