There were ten major stocks which helped S&P 500 index to make a new record on 28 October 2019. These include of Apple, United Health Group (UHG), JPMorgan Chase, Facebook, Intel, Bank of America, NVIDIA, Alphabet Class C, Alphabet Class A and Microsoft.

Other factors which contributed to the record high of the index was the recent bounce back in bond yields, after the US President Donald Trump decided to meet Chinese vice premier as mentioned in his tweet on 10 October 2019. The partial deal between the nations provided some hope to ease trade between the US and China. The treasury bond prices also witnessed an improvement. Many technology stocks also heaved a sigh of relief as major players like Apple and Nvidia have felt an impact of the US-China trade war on their businesses.

In this article, we would look at some of the major players in the index under discussion and cover their biggest announcements in October 2019.

Microsoft Corporation (NASDAQ: MSFT) remains the showstopper during October 2019 because of the winning of recent Pentagon cloud computing US$10 billion defence contract. Microsoft defeated the oldest player in the cloud computing market, Amazon and won this contract which boosted its share price during the period.

Other big announcements in October 2019. 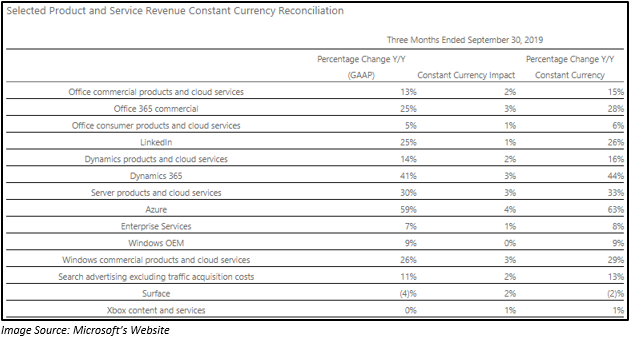 As per a report released by Reuters, Google- the owner of Alphabet Inc has made an offer to acquire Fitbit Inc, which is a US-based wearable device maker. However, the report states that there is no certainty that the negotiation between the parties involved would lead to any deal between them.

Fitbit’s devices are used for tracking the daily steps, distance travelled, heart rate, calories burned, floor climbed, the sleep duration along with the quality of sleep.

Spotify provides services related to music with millions of tracks for its users. Spotify enables users to find the right music or podcast for any moment.

On 28 October 2019, Spotify Technology SA (NYSE: SPOT) released its Q3 results. It declared that the company exceeded its expectation in Q3 2019 results with 30% growth in the total monthly active users (MAU) YoY and 7% on QoQ. 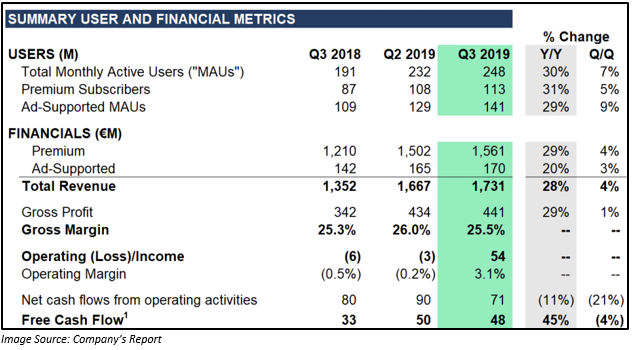 The number of premium customers grew by 31% to 113 million YoY from around the world. During the period, the company’s net cash flow from operating activities stood at €71 mn. Free cash flow during the quarter period stood at €48 million.

Spotify Technology SA last traded on NYSE at USD 144.30, up by 2.74 percent from its previous close.