Looking at the change in regulatory policies of various countries toward green energy sources, reliance on electric vehicles (EVs) and Lithium-ion batteries (LIBs) are expected to increase. This makes the long-term outlook for lithium positive, which is likely to help all the lithium explorers, miners, developers and producers to boost their financials in the coming years.

Amidst the growing importance of lithium commodity, let us talk about five Australian lithium players that are listed on the ASX below:

Orocobre Limited (ASX: ORE) is involved in the exploration, development and production of lithium at the company’s flagship Olaroz Lithium Facility and the operation of Borax. The company holds 25% interest in the Cauchari Joint Venture, that is managed by Advantage Lithium Corp, which has a portfolio of high-quality assets in Argentina.

Recently, Advantage Lithium Corp. released a summary of a Pre-Feasibility Study (PFS) for the Cauchari Lithium Project, in accordance with Canadian standards on the project.

The company has also released the results of its Annual General Meeting on the ASX recently.

September’19 Quarter Key Highlights: The company notified that the production for the quarter stood at 3,093 tonnes, as compared to 2,293 tonnes in the previous corresponding period (PCP) despite the maintenance shut in August. Its product sales for the period was reported at 3,108 tonnes of lithium carbonate with an average price of US$7,111/tonne on a Free on Board (FOB) basis, while its total sales revenue was US$22.1 million. The average price received during the quarter was 13% down QoQ.

Gross cash margins for the period (excl. export tax) stood at 31% or US$2,226 per tonne, a decrease of 40% and 78% on q-o-q and PCP, respectively. Operating costs (on the cost of goods sold basis, excluding export tax) stood at US$4,885/tonne, an increase of 9% and 5% on q-o-q and PCP, respectively. Costs were negatively impacted by higher cost carry forward inventory sold in Q1FY20, lower production and sales volumes.

Developments in WA Clean Energy Forum 2019: At the Western Australia Clean Energy Forum hosted on November 20, 2019, the company highlighted the recent developments. The company mentioned that it has been producing LFP cathode powders in its pilot plant in Brisbane, via its wholly owned subsidiary, VSPC Ltd, which have been extensively evaluated by Chinese and Japanese battery producers.

The company has also developed metal extraction technologies to recover lithium from mine waste and a phosphate for direct feed into the production of LFP cathode powders. LFP batteries provide superior safety, performance and longevity, which marks significant achievement of the company.

Sale of Emu Lake Tenement E27/562: In another update, the company announced that it has agreed to the sale of its Emu Lake tenement E27/562, which is located around 70 km northeast of Kalgoorlie.

The sale agreement was subject to the initial public offer (IPO) by Metal Hawk Limited. Metal Hawk is expected to issue Lithium Australia 0.3 million MHK shares at a deemed issue price of $0.20. 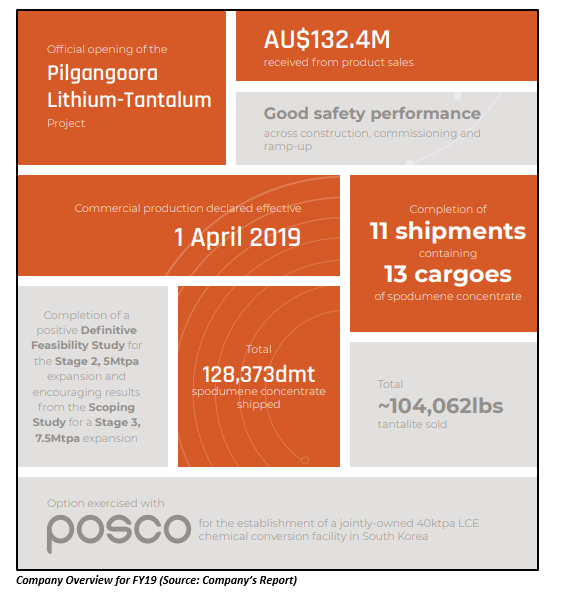 Galaxy Resources Limited (ASX: GXY) is involved in the exploration and production of lithium concentrate in Canada, Argentina and Australia.

Corporate Strategy and Projects Update: Recently, the company published its corporate strategy and projects update, where it highlighted that it is targeting on a final investment decision (FID) on Sal de Vida stage one in the second and third quarter of FY20. It developed Simplified Sal de Vida flowsheet in-house that greatly reduces technical complexity and risk. The project would be executed in multiple modules, and the new product strategy considers initial commercialisation of a primary lithium carbonate to accelerate earnings realisation.

Operations at Mt Cattlin focuses on optimising production and costs whilst meeting customer demand. Works at James Bay focuses on advancing the asset to an execution decision on an integrated project solution.

September’19 Quarter Key Highlights: The company notified that the production volume of lithium concentrate at Mt Cattlin, grading 6.0% Li2O, stood at 50,014 dry metric tonnes, which is the mid-point of guidance of 45,000 – 55,000 dmt. The site was reinforced as the low cost lithium concentrate operations globally, underpinned by the production unit cash cost US$387 / dmt (FOB) at Mt Cattlin.

The total shipment volume of lithium concentrate was recorded marginally short of the guidance of 60,000 – 70,000 dmt, at 58,278 dmt. At the end of the quarter, the cash balance and debt were reported at US$169 million and US$32 million, respectively.

AGM Chairman’s Address: On November 21, 2019, the company published its annual general meeting report where the company Chairman, Anthony Kiernan expressed his grief on the tragic event which occurred at its Pilgangoora Project site last week with the death of an employee of one of its contracting partners as a result of an incident unrelated to mining operations.

Going forward, the company’s performance for FY19 remained satisfactory with its emergence as a new Australian lithium-tantalum producer through the commissioning and operation of its Pilgangoora Project.

He mentioned that the demand for lithium in the period was subdued because of Chinese domestic pricing for lithium chemicals and delays on the part of offtake customers in completing construction and commissioning of their new chemical conversion facilities. In response, the company moderated the production to align with its offtake customers’ requirements. Moreover, the company utilized this opportunity to enhance its product recoveries and lower operating costs.

The period also witnessed investment in the company by Contemporary Amperex Technology (Hong Kong) Limited – or “CATL”, China’s largest battery manufacturer for electric vehicles. During the period, the company continued its work with POSCO, a large South Korean company in advancing on its proposed joint venture and the pilot studies to build and operate a downstream chemical conversion facility in South Korea.

The company’s positive medium and long-term outlook for its high-quality spodumene concentrate product is supported by developments in the lithium sector, where US battery metals giant Albermarle would be acquiring 60% of the Wodgina spodumene project for US$820 million.

September’19 Quarter Key Highlights: During the period, targeting the discovery of new lithium-rich pegmatites as well as increasing Ore Reserves, the company commenced Mineral Resources exploration and expansion drilling program at the Finnis project. Whilst kicking off a second round of expansion drilling, it intersected high-grade spodumene mineralisation in multiple drill holes as part of the program.