3 Signs you should look around Economic Recovery

While the world has run out of road to tackle coronavirus crisis, Australian economy has coped with the virus in a much better way than many advanced economies, though it has slipped into its first recession in last 30 years. Economists anticipate that the Australian government’s massive economic stimulus and the country’s capability to restrict coronavirus spread will help Australia in recovering earlier than other nations.

Let's have a look at 3 things happening in Australia as it progresses towards economic recovery:

Job advertisements have increased significantly across the country with Tasmania and Queensland in the lead, which reflects that business confidence is reviving in the wake of coronavirus pandemic.

In the period between 25 May and 7 June, new job ads were posted, reflecting a massive increase of 60.6% over the last fortnight (compared to April), growing again after jobs dried up following the shutdown, as per data reported from employment website named SEEK. This compares to a fourth consecutive fortnightly after volume of advertised positions recovery ignited in May witnessed a growth of 26.8%, 39.7% and 49.2% in the previous 3 fortnights.

The Australian job portal’s MD Kendra Banks stated that the data reaffirmed the view that job ad volumes are now recovering, though they are still in the early stages of recovery. Further, job ad volumes are being examined for stability and consistency.

She further noted that the job ad volumes tend to ease towards the end of the financial year as per analysis on past data but are boosted in July and August when companies reset their budgets.

Their data also demonstrated ads for workers in trades and services, healthcare, hospitality, tourism, manufacturing, transport and logistics, education and training sector propelled most of the growth in the fortnight ending 7 June. 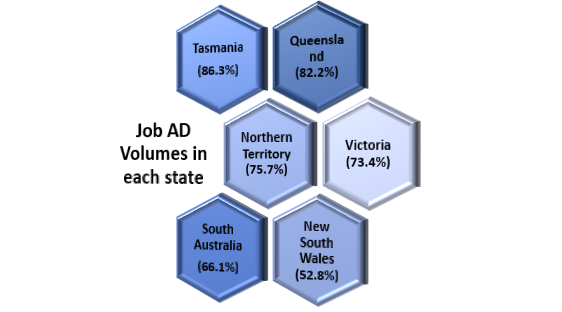 Though, job ads have increased now than in April, the reopening of the economy is likely to result in the higher technical unemployment rate, as there will be more applicants willing to enter the job market.

Australian property sellers who postponed their plans to sell their homes seem to be returning to the property space and are relisting their homes reflecting confidence in searching for buyers.

The preliminary clearance rates boosted 63.3% in the week ending 14 June as volumes increased., as per property consultant CoreLogic. It reported that about 1,164 properties were scheduled for auction since the week ending 19 April. There were 711 auctions planned with an initial clearance rate of 59.8% later on correcting to 56.2% at final numbers.

Both Melbourne and Sydney returned initial clearance rates of above 60% for the week ending 14 June with Sydney turning out to be the best performer.

The property consultant stated that though volumes have been reduced than a year ago, the gap had been lowering with 1,505 auctions last year when 61.8% clearances happened.

Further, rents are being slashed with landlords left with no choice but to reduce them in nearly 1 in 3 Sydney and Melbourne homes, according to Domain data. The research firm reported that of all the properties in the property space, about 30% were discounted as media rents were down by 6.4% during the time when the coronavirus outbreak was on the top.

The median rent was decreased by 5.6%, and about 27% of properties had asking rents lowered. This change is due to rapid unemployment as a result of loss of jobs, falling demand and higher stock of housing.

Market experts expect that falling of rentals will persist for some time as properties are priced more suitably for the current market.

Australian PM Scott Morrison will fast track $72 billion worth of infrastructure projects that will approve 15 major infrastructure projects. It will include Brisbane-Melbourne inland rail, expansion Olympic Dam in South Australia and Marinus Link between Tasmania and Victoria to restart the economic recovery process from the coronavirus induced recession. The decision will help about 66,000 direct and indirect jobs.

In a speech today, Mr Morrison outlined more details of the Government’s JobMaker plan that includes more spending on infrastructure and major projects. Earlier, he had stated that the purpose of the program would be to get Australian businesses out of ICU after COVID-19 restrictions led to the shutdown of many.

In the new plan, the investment and jobs will be brought to the market earlier by targeting 50% fall in Commonwealth assessment and reduce the time of approval from an average of 3.5 years to 21 months. The list also has some emergency town water projects that will also be speeded up in New South Wales including a lot of roads, rail, and iron ore projects in Western Australia.

On one hand, Australian economy still stands facing risk of the second wave of coronavirus infections, on the other hand, ending of government stimulus on JobKeeper post-September can significantly hurt the economy.