What is the Telecommunications Services Industry?

The rise in demand for mobile services has affected the demand of fixed-line services, modifying the way Australians interact by providing increased connectivity. The revenue generated via wireless services has witnessed an increase, driven by the rise in mobile data consumption volumes and enhanced mobile connectivity. However, this growth in the wireless sector has caused profit margins of telecom services subdivision to decline, driven by intensified price competition.

According to market experts, the total subdivision revenue is anticipated to grow at an annual rate of 0.2 per cent over five years through 2018-19, amounting to $37.8 billion.

Key Players in the Aussie land:

The major fixed broadband service providers in Australia are:

Let’s look at the recent updates on two telecom sector stocks listed on ASX as follows:

Across Australian and New Zealand region, Vocus Group Limited (ASX: VOC) has laid beyond 30,000 kilometres of fibre optic cable operating now. It is a specialist fibre network services provider and was incorporated in 2008.

In 2016, Vocus Communications Limited and M2 Group Ltd merged together, and in the latter part of the same year, VCO acquired NextGen. 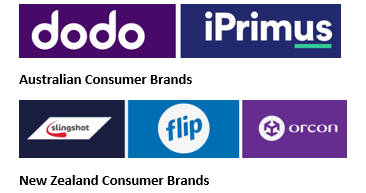 On 27th May 2019, the company had obtained non-binding, confidential and indicative proposal from EQT i.e. EQT Infrastructure. This was related to the acquisition of all company shares at A$5.25 per share in cash. The company’s Board had decided to give EQT non-exclusive due diligence which is accessible to EQT so that EQT can potentially put across a formal binding proposal to VCO.

Post a paced up due diligence period, and the company announced on 4th June 2019 that EQT had terminated the transaction which had been laid down in the Indicative Proposal, ceasing all discussions on it.

Regarding the same, MD & CEO, Kevin Russell stated that the company remains optimistic about its network assets and foresees great opportunity to gain market placement in Vocus Networks.

A strategy update for investors is scheduled for the last week of June.

The company released its H1 FY19 Financial results in February this year. It has an Underlying EBITDA guidance range between $350 million and 370 million for FY19. 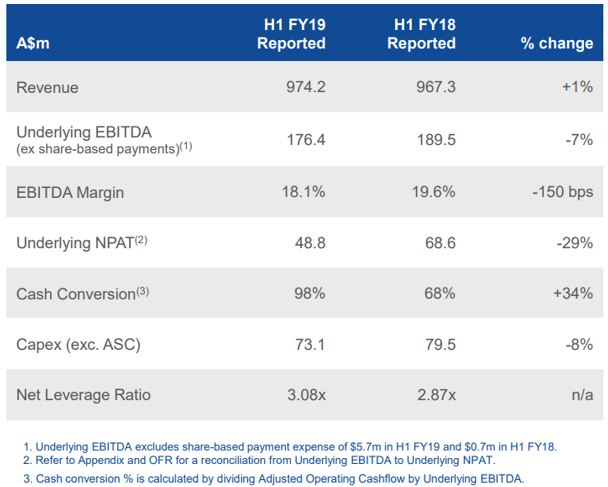 A telecommunications carrier, Telstra Corporation Limited (ASX: TLS) is based out of Melbourne. It caters customers with telecom and informative services.

On 29th May 2019, the company announced that there had been good progress on its T22 strategy, and it was anticipating making a non-cash impairment and write down of the value of its IT assets by approximately $500 million. Further for FY19, TLS raised its guidance by almost $200 million on the restructuring costs. This was an outcome of bringing forward a consultation on the proposed job reductions.

The company informed that it was way ahead of its initial plan on the simplifying its structure and work ways. It had begun the consultation with employees and representative unions on proposed job reductions. By the closure of the financial year, TLS is expecting to notify a drop of ~ six thousand roles. By the close of 2022, this would be in sync with the net cost out the target of $2.5b.

The restructuring costs would have an increment to around $800 million (from $600 million) in FY19. The employees under the effect would not leave TLS until the beginning of 2020 and the consultation is most likely to end in mid-June.