Energy exploration and production company, Eon NRG Limited (ASX: E2E) has an asset portfolio of exploration and producing assets located in onshore USA basins in the states of Wyoming and California. The Company's growth path is through the drilling of high impact oil exploration wells, supported by a wholly owned and operated long life oil and gas production assets and associated cashflow.

Below is the snippet of the onshore oil and gas fields that are operated by Eon NRG Ltd through its 100% owned subsidiary, Incremental Oil and Gas USA Holdings, Inc: 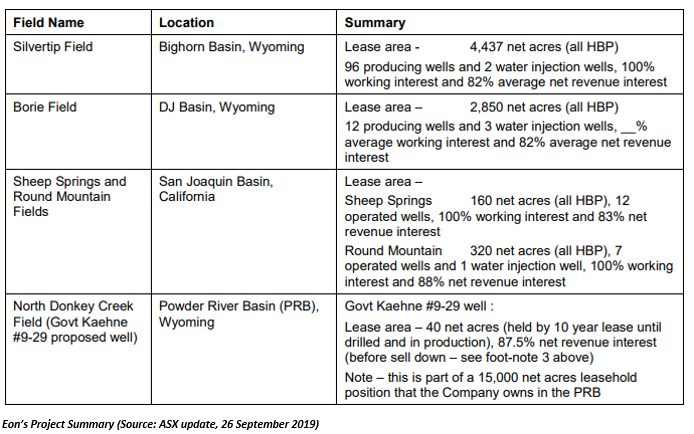 The company, today, has provided a summary of the independent 1P reserves estimate for the company’s projects as at 30 June 2019. This summary includes the maiden reserves for the company’s unproduced prospect in the Powder River Basin (PRB) acreage, (Donkey Creek Field) Wyoming.

Reserve replacement is an important value driver for an oil and gas exploration and production company. As per the company, it will continue to look at its current and new leasehold positions to identify drilling opportunities with the appropriate reward, risk and scale.

In its announcement, Eon has confirmed that it is well placed to take advantage of conventional oil and gas development opportunities which have a lower entry barrier (leasehold cost) but which still demonstrate strong economics.

the Silvertip, Borie, Sheep Springs and Round Mountain Fields. These fields have been generating positive cash flow for Eon. They are long-life assets which have 18 plus years of future production based on the independent reserve estimates.

The 1P net reserve of PRB’s first well, Govt Kaehne well, has been estimated at 318 Mbbls. It is to be noted that the proved undeveloped (PUD) reserves only include the primary target formation (Dakota) and do not reflect the potential behind pipe oil that may be in the secondary target formation (Muddy).

The focus on conventional well prospects in areas with proven historic production but with less activity from some of the major E&P companies provides Eon NRG with niche development opportunities. Lower land costs minimise up-front capital requirements to participate in these opportunities.

Eon recently completed the construction of the well pad and access road for the Govt Kaehne #9-29 and is now planning to drill the well utilizing rig #312, which has a very experienced crew.

The company is planning to drill this well to a total depth of ~6,300 feet, which is expected to take around 10-14 days, and upon reaching the total depth, it intends to perform a drill stem testing and open hole logging to evaluate the reservoir and deliverability.

In addition to this, the company will take further 45 days to complete the well for production, following which, the oil production and sales are expected to commence (2019 end).

Eon recently informed that it is considering selling some part of its interest in the Govt Kaehne well to industry partners, to have the necessary capital to complete the well. However, it is to be noted that the company intends to keep a majority interest in the well and operations of the well.

Eon’s Managing Director Mr John Whisler has confirmed in today’s release that the company will keep its focus on growing its reserve base through identification and development of acreage that it currently owns as well as from new opportunities that it identifies where resources can be extracted economical.