Crown Resorts Limited (ASX: CWN) is one of Australia’s largest entertainment groups. Its businesses and investments are in the resorts sector. CWN contributes to Australia’s employment, tourism, training and social responsibility programs. It is the owner and operator of two leading integrated resorts, Crown Melbourne Entertainment Complex and Crown Perth Entertainment Complex. The group also has development projects and interests in various digital businesses.

CPH Crown Holdings Pty Limited is a subsidiary (100% owned) of Consolidated Press Holdings Pty Limited. The agreement had been finalised for the purpose of diversifying CPH’s investment portfolio. After the completion of the share sale, CPH would own almost 26% of the company with a value around A$2.3 billion (at A$13.00 per share).

CPH Crown Holdings Pty Limited is positive about the prospects of the company. It is optimistic about the resort facilities in Perth and Melbourne, and the Crown Sydney at Barangaroo, which is due to open in the former part of calendar year 2021.

As per one of the investors of Crown, the sale allowed him to keep up his long-term connection with CWN and simultaneously expand his investment portfolio.

Earlier in April, the company had announced that Wynn Resorts Limited had ended all discussions with the company regarding potential acquisition of Crown.

The company announced its 2019 Half Year Results on 20th February this year. Total normalised revenue throughout CWN’s resorts in Australia had decreased by 1.2% compared to pcp. However, main floor gaming revenue was up by 0.9%, with a slight increment from Melbourne and balanced by the constant slowness from Perth. VIP program play turnover throughout its resorts was reported to be $19.9 billion, which was less by 12.2% post a slowdown in the last two months of the year.

The Net operating cash flow was $382.3 million, better than $368.5 million on PCP basis. Besides this, the net capital expenditure amounted to $209.3 million. The dividend payments were worth $205.9 million, and share buy-back payments were recorded at $131.4 million. 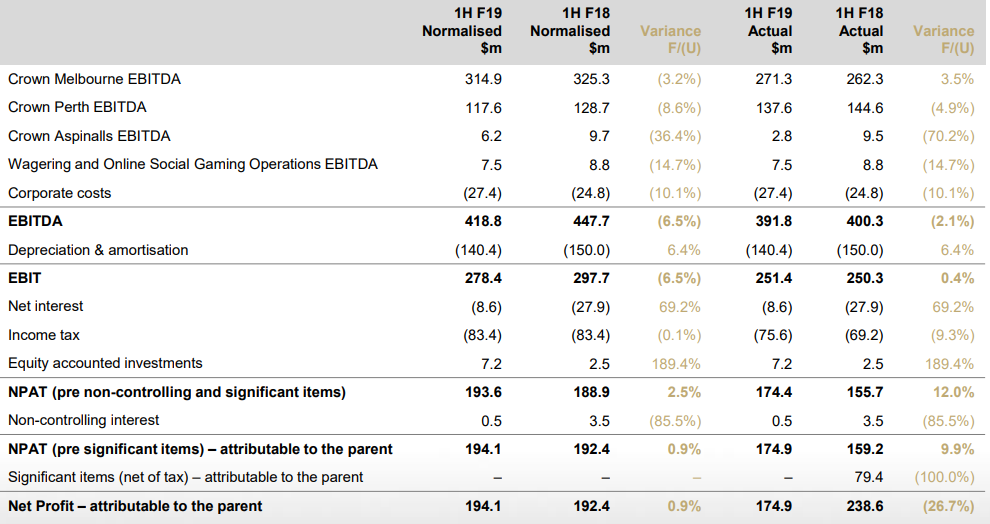