Implantable hearing solutions provider, Cochlear Limited (ASX: COH) has reported a sales revenue growth of 7% in FY19. The company also earned a net profit (including the revaluation of innovation fund) of $276.7 million in FY19, an increase of 13% as compared to last year.

Services revenue of the company increased by 20% over the period, with sound processor upgrade revenue increasing by 17%. Further, the cochlear implant business also witnessed a 2% growth in its revenue, but the total units declined by 3%. During the year, the company lost its market share in US and Germany due to a competitor product launch. However, both the markets have witnessed an uplift in sales since the launch of the Nucleus Profile Plus Series cochlear implant in Germany in mid-May and the US in late June.

In FY19, the operating cashflow of the company grew by $37.9 million to $296.0 million. The company’s Board has determined a final dividend of $1.75 cents per share, taking the full year dividends to $3.30 per share (fully franked) in FY19. It is to be noted that since listing, the company has cumulatively paid out around 70% of operating cash flows as dividends.

The company has a wide range of fully-featured products and a broad patent portfolio that protects the company’s intellectual property. Since listing, the company has invested more than $1.9 billion, with 13% of sales revenue invested in R&D in FY19. 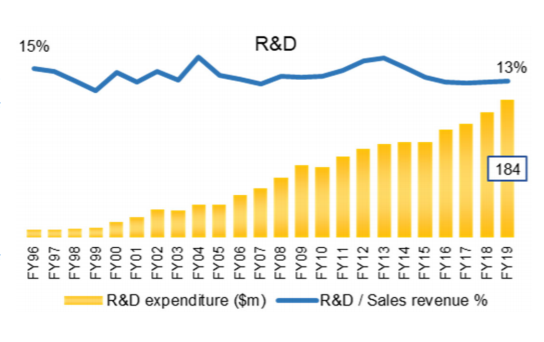 By looking at Cochlear’s financial history, it is observed that there is a strong and consistent correlation between reported net profit and the operating cash flows generated by the business. 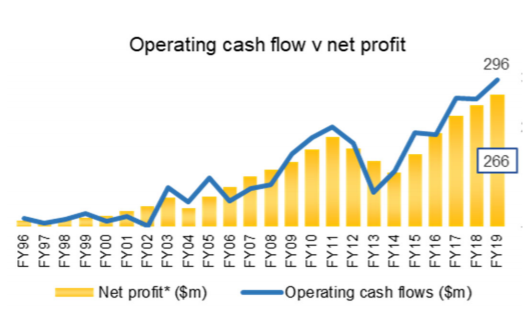 In the financial year 2020, the company is expecting its net profit to be in the range of $290 million to $300 million, representing an increase of 9-13% on FY19 underlying net profit. During FY19, the company was committed to making investment in market awareness and access activities. In late FY19, the company launched a number of new products, due to which it now expects strong growth in cochlear implant units.

In FY2020, the company will maintain its focus on growing the hearing implant market. The company believes that it is in a strong financial position, which is enabling it to fund its growth activities while rewarding shareholders along the way with a growing dividend stream.

In FY2020, the company is expecting to release the new osseointegrated steady-state implant (OSIA) product. The capital expenditure in FY2020 is expected to increase to around $180 million, including the continued development of the China manufacturing facility, fitout of the new, larger Denver office and investment in IT platforms to strengthen the company’s connected health, digital and cyber security capabilities. Later in FY21, the company expects its capital expenditure to drop to around $100 million.

The company is committed to building grass roots awareness with candidates through its direct-to consumer marketing activities. It is focussed on building referrals from the hearing aid channel in the US through the establishment of the Cochlear Provider Network, which links surgeons with hearing aid clinics, while building professional awareness through improved education.

During the year, the company received positive results from its ‘CI532 MultiCenter Clinical Study (532), a study which is designed to measure the benefits of bimodal cochlear implantation. This study found that, on average, participants achieved a 10-fold improvement in satisfaction with their hearing performance with cochlear implants over hearing aids, with dramatic improvements in the ability to understand conversations, hear on the phone and listen to and appreciate music, an encouraging news for the company and its shareholders.

The study is demonstrating the impact which implant has on the patient’s quality of life, an increasingly vital component of determining the value of funded interventions to payers. In addition, the study is also providing an important foundation for educating hearing professionals of the benefits of cochlear implants over hearing aids in this patient population.

In the last decade, there has been a greater uptake of cochlear implantation by older adults, particularly seniors, as awareness of the intervention has grown, and the body of evidence builds connecting good hearing with healthy ageing. With the growing awareness of cochlear implants, the funding is also expanding in emerging markets.

In the last few years, the company has launched market-leading products including:

As per World Health Organization (WHO), more than 460 million people (5%) of the world’s population is currently experiencing disabling hearing loss. WHO expects these numbers to pump up to over 900 million people by 2050. This means that there is a significant, unmet and addressable clinical need which can be met through Cochlear products.

The company has estimated that over 15 million people could benefit from a cochlear or bone conduction implant to treat moderate to profound hearing loss across its target segments of children globally and adults and seniors in the developed world. The company believes that there is an opportunity to strengthen the treatment pathway for acquired or progressive hearing loss in older children.

Cochlear has three programs for driving growth of the adults and seniors segment which include:

Over the years, the company has increased its investment in health economics, its market access capability and the collaborations it has with the medical research community to build on the clinical evidence that demonstrates the effectiveness of its products, particularly for seniors.

The company has assured that it will continue to invest operating cash flows in market growth activities with the objective of delivering consistent revenue and earnings growth over the long term. Via disciplined investment, the company is targeting to maintain the net profit margin, reinvesting any efficiency gains, currency or tax benefits into market growth activities