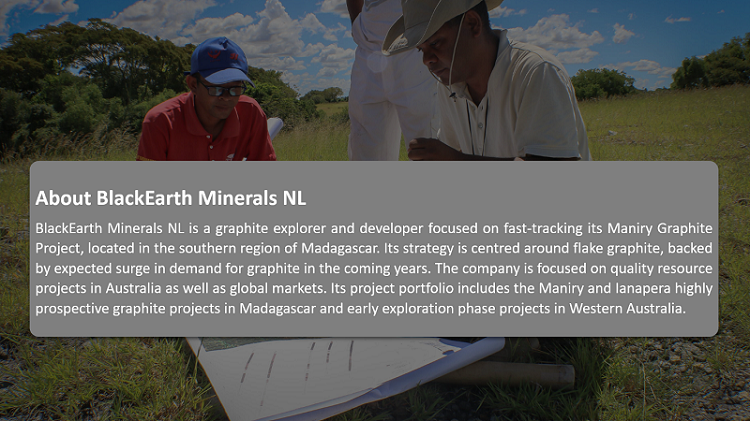 During the three-month period to September, the Company completed a bookbuild and secured investment commitments for $ 1.68 million before costs, by issuing ~28 million new fully paid ordinary shares at $0.06 per share. The bookbuild completion was made through the newly appointed corporate advisor, Peloton Capital Pty Ltd.

The funds raised from the placement completed on 29 August 2019 are to be used to fast-tracking the company’s Maniry and Ianapera graphite projects in Madagascar, with the proceeds being applied to bulk trial mining and the export of ore to a pilot plant, pilot trial, bankable feasibility study related activities/consultants/contractors and working capital.

With respect to its flagship graphite project – Maniry, BEM made significant progress in terms of securing government support, achieving encouraging results from ore sample tests and also received positive feedback from manufacturers of anode material and spherical graphite during the quarter.

The institute confirmed the presence of a high distribution ratio of large flakes in graphite ore owned by BlackEarth Minerals NL. Additionally, BGRIMM secured a high recovery of graphite from the tests and a high level of fixed carbon content. According to the institute, the fixed carbon content can even be further improved through optimising processing and technical parameters.

The industry average of spherical graphite production yields is 40%; however, yields achieved with the testing on concentrate from the Maniry Graphite Project stands at 52%. Dorfner ANZAPLAN (Germany) undertook a detailed program targeted towards testing the Maniry concentrate.

Key characteristics of some of the critical elements that the manufacturers of lithium-ion anode material require have been given in the image below.

More on the observation can be read here.

BEM recently shared graphite concentrate samples from the project with potential Chinese offtake partners, operating in the expandables, battery anode and high-end refractory markets. The Chinese players will undertake test work on the samples, targeted towards confirming the suitability of the concentrate for use in their respective markets.

All the above-mentioned developments are of utmost important to the company, as it is moving ahead with its plan to execute offtake agreements.

During the remaining period of FY2019, the company plans to focus on its southern Madagascan graphite projects - Maniry and Ianapera, with major focus on advancing the Maniry graphite project DFS over the coming months.

During the reporting period, BlackEarth Minerals applied $563,000 to operating activities, and cash inflow through financing activities stood at $1.58 million. At the end of the September quarter, BEM had cash and cash equivalents of $2.39 million. For the next quarter ending 31 December 2019, BEM has estimated $799,000 in cash outflows.

The company is scheduled to hold its annual general meeting on 29 November 2019 in West Perth, Western Australia. The following resolutions will be considered during the meeting: