Advanced gold and copper explorer, Alice Queen Limited (ASX: AQX) recently informed the exchange that it has received binding commitments from a range of professional, sophisticated and other investors for a $ 3.88 million capital raising program, targeted towards funding the Company’s drilling activities at its assets in in New South Wales (NSW).

Under the placement led by joint lead managers Evolution Capital Advisors Pty Ltd and BW Equities Pty Ltd, the Company plans to issue approximately 121 million fully paid ordinary shares, each at a price of $ 0.032, representing an 8.5% discount to its last closing price on ASX (as on 19 February 2020).

The issue of shares expected in the coming days doesn’t require shareholder approval under the Company’s remaining placement capacity under LR7.1.

Use of Proceeds - Enhancing Value and Prospectivity of NSW Assets

AQX intends to direct the funds raised from the equity placement towards advancing exploration efforts at its portfolio of assets in the Northern Molong Belt (NMB) region in central NSW.

Funds would be used to –

While expressing his gratitude towards shareholders for their continued support and confidence in Alice Queen, Mr Buxton stated that the Company is looking forward to delivering on its objective of enhancing the value and prospectivity of assets in the northern Molong Belt over the course of 2020.

Alice Queen’s projects represent ~700km2 of the highly prospective ground of the Molong Belt, which is located in north along strike from Cadia-Ridgeway mine (50m ounces gold + 9m tonnes copper) and adjacent to ALK’s Boda discovery, following which the Company informed on the improved prospectivity of its projects in the region. 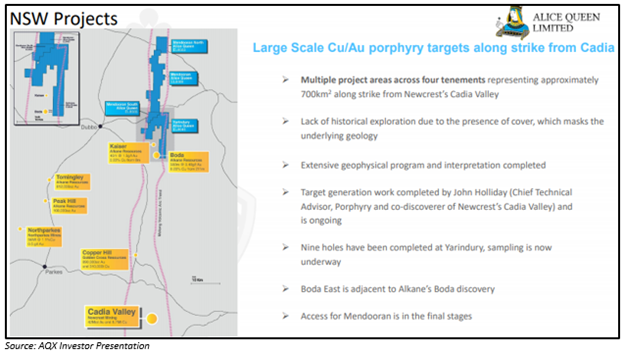