The Sale Of The Largest Diamond By BlueRock Diamonds PLC

BlueRock Diamonds PLC (BRD) operates in the mining sector in South Africa. Kareevlei diamond mines consist of five known kimberlites (a kind of igneous rock formation) spanned across 3000 hectares; which is naturally found in the Earth’s crust in form of vertical structures known as pipes. Internationally, they are top ranked in terms of average value per carat and produce top quality diamonds.

The business has higher seasonality primarily due to two reasons.

Firstly, there is (traditionally) an extended break over the Christmas period which lasts for three weeks. This time is planned for a shutdown and carrying out maintenance activities but in effect, like other miners, the company loses a month of production in December and January. The company plans to mitigate the extent of the closure and expect there to be less of an impact.

Secondly, the rainy season, which in the Northern Cape runs from January to April; provides two main challenges for the company; extraction from the pit becomes more difficult as in excessively wet conditions travelling in the mine becomes hazardous for large hauling equipment and secondly, kimberlite has a characteristic which when wet will not efficiently pass through the crushing and screening plant. The surface of the haul roads is usually stabilized using crushed dolomite, which enables the hauling equipment to travel in a safer way.

Also, the company is working out a plan on the storage of crushed kimberlite ready for processing plant which can last for about two months so that in wet conditions crushing process can be avoided and the effects of the rainy season can be mitigated.

BlueRock Diamonds PLC is pleased to announce the sale of the 24.98-carat diamond, recovered earlier this month as reported in the Company's announcement of 7 June 2019. The Diamond was valued at US$190,000. The company had made great progress in the implementation of its development strategy to achieve increased production and are clearly seeing the benefits in the form of higher throughput, which was achieved. This is also reflected in the number of high-value stones they continue to produce.

During the period, the group developed the KV1 pipe, the second of five known kimberlite pipes at Kareevlei, in order to benefit from the higher inferred grade of KV1 and to provide the flexibility of supply of ore to the plant. 10 metres of the non-diamond bearing calcrete cap had been mined to waste, which allows for the higher Inferred Mineral Resource grade of KV1 to be reached sooner than in KV2 where only 7 meters of the calcrete cap was mined to waste. The first ore in level 1 kimberlite (10m to 20m below the surface) is being processed now, yet it is too early to infer any meaningful conclusions at this stage. They have started to develop a larger push back in KV1, which will entail several months of waste blasting so that they can access the next level of kimberlite. Whilst the waste removal is taking place, they will be processing the level 1 ore from KV1. They continue to finetune the pit development plan to facilitate mining KV1 and KV2 in tandem in the most efficient manner and to optimise the strip ratio required in order to achieve the maximum returns.

The average grade continues to increase as they mine lower into the kimberlite body, reaching 3.12cpht in the first half from KV2. The increased grade arises from processing ore from the sub 20m level of KV2, which at times reaches over 6cpht on a weekly basis. 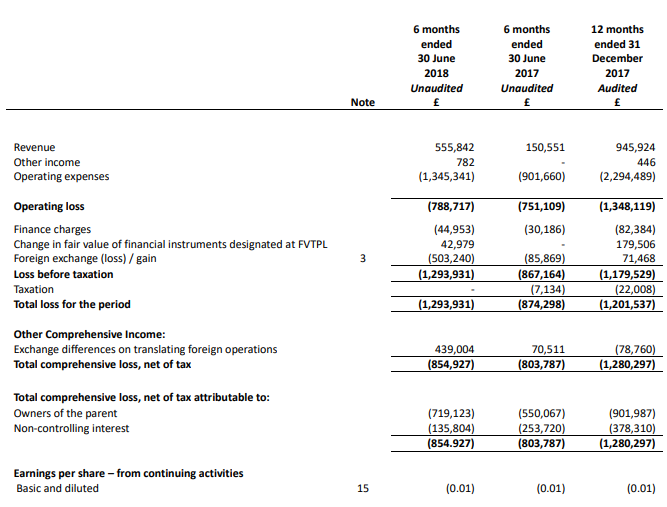 There was a surge of 81 per cent Y-o-Y in overall production for H1 FY2018 to 73,028 tonnes (H1 2017: 40,343 tonnes). This had been achieved despite the seasonal downturn due to the rainy season always experienced in the first half of each year, aggravated by the faulty crusher which resulted in a production halt in June.

Daily Chart as at June-19-19, before the market close (Source: Thomson Reuters)

At the time of writing (as on June 19, 2019, at 08:41 AM GMT), shares of BlueRock Diamonds PLC were quoting at GBX 0.11 per share with no change against the yesterday's closing price level. The outstanding market capitalisation of the company stood at around £1.79 million.

From the SMA standpoint, shares of the BlueRock Diamonds PLC were quoting considerably below its 60-days and 200-days SMA prices, which is a bearish technical indicator and indicates that the stock might fall further from the current trading level.

In the past 1 year, shares of BlueRock Diamonds PLC have delivered a negative price return of 90.43 per cent. In addition, on a year-to-date basis, the stock was down by 60.71 per cent and declined by 56 per cent in the past three months. The company’s stock beta was 1.35, reflecting higher volatility as compared to the benchmark index.