PZ Cussons Plc (PZC) is a consumer products company with more than 130 years of history and expertise. The company is known for its innovation and created some of the world’s best brands which include Imperial Leather, Cussons Baby, Morning Fresh and St. Tropez. The company operates worldwide including developed and emerging markets. The company operations are divided into four categories being Home Care, Personal Care & Beauty, Electricals and Food & Nutrition. The company is having an employee base of more than 5000 professionals catering to the needs of its customers across Africa, Asia, North America and Europe. Personal Care & Beauty is the company’s largest category with a strong international presence. The company’s home care category provides home care products that help its customers to keep their homes fresh and clean. Food and Nutrition category is a diverse and growing business for the company providing nutritious foods with great taste.

On 13th June 2019, PZ Cussons plc announced that its Chief Financial Officer Brandon Leigh had opted for the separation from the company. Mr Leigh had given more than 22 years to PZ Cussons and was appointed to the company’s board in the year 2006. The company is yet to appoint new CFO and meanwhile Alan Bergin, company’s current Commercial Finance Director will assume the position of Chief Financial Officer.

The company announced its full-year trading update. As per the update, the company’s Full-year profit is in line with the management guidance set at the time of issue of the interim results in January 2019. The PBT (profit before tax) and exceptional items were expected to be around £70 million for the year-end same as the trading update in April. The company’s performance in the geographic areas of Asia and Europe reported an expansion of its distribution network along with product innovation and renovation. The group’s beauty division performed exceptionally well for the period. The company’s performance in the African region remained unsatisfactory due to Nigeria’s macro-economic challenges and issues at the port. The company posted a lower level of net debt as compared to the last years and the balance sheet remains robust as expected by the company. 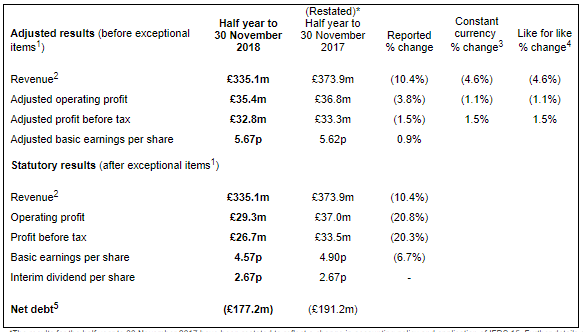 Daily Chart as at June-14-19, before the market closed (Source: Thomson Reuters)

At the time of writing (as on June 14, 2019, at 9:11 AM GMT), shares of PZ Cussons Plc were quoting at GBX 202.30/share and declined by 0.098 per cent against the yesterday's closing price level. The outstanding market capitalisation of the company stood at around £869.13 million with a dividend yield of 4.09 per cent.

From the SMA standpoint, at the time of writing, its shares were trading marginally above the 30-days and 60-days SMA. However, they were trading considerably below the 200-days SMA, which indicates a negative trend in the stock price and carrying the potential to move down further from the current trading levels.

In the past 1 year, shares of the PZ Cussons Plc have delivered a negative price return of 13.02 per cent. However, on a year-to-date basis, the stock was down by approximately 4.84 per cent and increased by 2.38 per cent in the past three months.

The company had shown decent performance in Europe and the Asian region on a reported basis. The increased performance was offset by the ongoing macro-economic challenges in Nigeria. The company is focusing on its Nigeria business to maintain its market share and reduce the risk until the country returns to growth stage.

The company had taken several initiatives to allow more focused investment towards its brands in the regions of Europe and Asia and restricting the limit in Nigeria.

The company’s African operations had witnessed weak consumer demand with high supply chain expenses. The low exchange rates result in low volumes, prices and margins in the Nigeria Region. The company’s Asian operations remain profit generative. The Australia market remained profitable with good growth from Personal Care, and Food & Nutrition and Home Care categories. The new product launches in Indonesia helped the company to improve its profitability. The new products are launched under the company’s popular brands which include Cussons Kids, Imperial Leather and Cussons Baby.  The company performance in Europe remained decent despite ongoing macro uncertainty in the UK. The company launched new products under the washing and bathing division to improve its revenue growth in the United Kingdom.