United Kingdom-based XP Power Limited (XPP) is a manufacturer and developer of critical power control mechanisms for the electronics sector. The group offers power solutions, including DC-DC converters and alternating current (AC)-direct current (DC) power supplies. The company's operations are differentiated according to three geographical segments: Europe, North America and Asia. Currently, the group is a member of the FTSE All-Share and FTSE techMARK index. 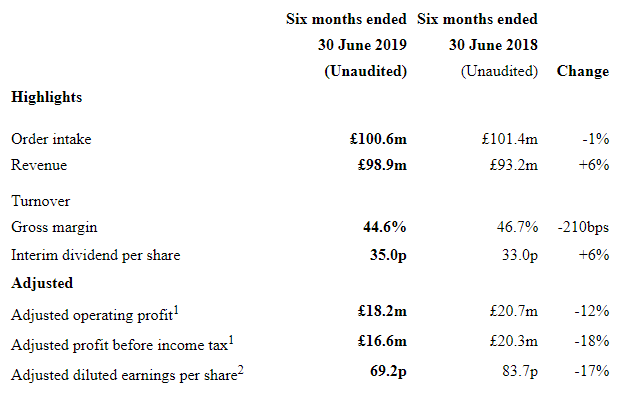 The company’s announced results for the first half of 2019 reflect tougher trading conditions. While growth in the Industrial, Technology, and Healthcare markets remained healthy, this was offset by a cyclical slowdown in the Semiconductor Equipment Manufacturing market and pressure on the gross margins, resulting from the surge in the United States trade tariffs on Chinese manufactured goods, historic component product mix and price inflation.

The company is well-positioned to take additional share and will benefit from any recovery in the Semiconductor Equipment Manufacturing sector. The company remain conscious of potential risks arising from the international macroeconomic challenges and continue to anticipate an improved revenue performance in the H2 FY19 as a result of the surge in the order book since the year-end. With a proven strategy, robust design win momentum and an extended product portfolio, the Board remains positive regarding the prospects of the group.

While writing (as on 07th November 2019, at 10:03 AM GMT), XP Power Ltd shares were trading at GBX 2,770.00 per share; which remained flat as compared to the previous day closing price level. The company’s market capitalisation was around £534.13 million.

In the past 1 month, XPP shares have delivered a positive return of 13.99 per cent. Also, on a YTD (Year-to-Date) time interval, the stock surged by approximately 31.59 per cent and was up by 37.13 per cent in the last three months.

UK based EQTEC Plc (EQT) with its technology, converts waste into gas to run energy projects. The company is specialising in advanced gasification technology for industrial size power plants. The group is focussed on finding innovative measures to reduce increasing global waste and convert it into synthetic gas, which can be used to power turbines and generate electricity. The company is known for its advanced modular gasification technologies offering higher efficiency as compared to the competitors. The company helps project developers in the construction of waste disposal plants with higher profitability margins.

EQTEC Plc released an update on the North Fork biomass project in California. The project is regarding constructing and operating of a biomass plant of 2 MW capacity by North Fork Community Power LLC (NFCP). The company also acquired an interest of 19.99 per cent in NFCP on financial close of the project earlier in June 2019. In July 2019, the State of California allowed NFCP to issue tax-free bonds amounting to US$9.3 million and non-tax-exempt bonds totalling US$5.5 million to potential investors for fundraising. Furthermore, EQTEC will invest US$2.5 million to make this project reach financial closure. Due diligence and finalisation of legal documentation are in process for issuance of bonds. The fires in the forests of California have caused catastrophic impact and therefore, the process is taking much longer than expected to complete. The company has agreed with Phoenix Biomass Energy Inc to bring the project to a financial close by offering debt instruments to the potential investors. This collaboration will also address this crucial environmental and social appeal in the state.

While writing (as on 07th November 2019, at 09:58 AM GMT), EQTEC Plc shares were trading at GBX 0.107 per share; plunged by 2.72 per cent as compared to the previous day closing price level. The company’s market capitalisation was around £3.41 million.

In the past 1 month, EQT shares have delivered a negative return of 38.89 per cent. Also, on a YTD (Year-to-Date) time interval, the stock plunged by approximately 88.17 per cent and was down by 53.19 per cent in the last three months.