ITM Power Plc (ITM) is a renewable energy company which is engaged in manufacturing hydrogen energy solutions, storage and utilization systems. Key technologies of its specialization are water electrolysis and Fuel Cells. The Company till date has opened four hydrogen stations, which convert excess electricity available during non-peak hours to Hydrogen, to be re-converted into electricity during peak demand hours. The stations are located at the Advanced Manufacturing Park in Rotherham, National Physical Laboratory at bushy Park in Teddington London, centre for engineering and manufacturing Excellence at Rainham in the London Borough of Harving and at Cobham Services Motorway service area. The station at Cobham Services Motorway service has been built in partnership with Shell Oil Corporation.

The Company has its shares listed in AIM on the London stock exchange, and they trade there under the ticker name ITM.

The Company announced on 22 July 2019 that it has taken on lease a new manufacturing unit to be located in Sheffield in the United Kingdom in order to build its global manufacturing hub. The Company has seen a spike in orders for its specialist equipment, and its existing manufacturing facilities are not able to meet the increased production demand. The new facility leased will be 134,000 square foot in area, which will able to make electrolysis equipment with electricity generation capacity of 10,000 Megawatt per year. The facility to be built by PLP will be in close proximity of ITM's existing manufacturing facility, whereby less cost would be incurred due to shared logistics. 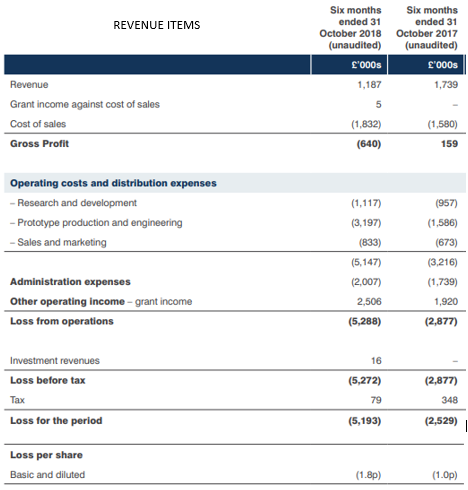 Daily Chart of ITM Power Plc, as on 13 August 2019, before the market close (Source: Thomson Reuters)

The Company is a pioneer in the field of cutting-edge renewable energy technology. It can enable electricity storage in case of abundant availability and least requirement and supply it back to the grid when demand is high, outstripping real-time available production. The concept of hydrogen economy first proposed by J.B.S Haldane has been gaining worldwide attention as the country prepares itself for a fossil-fuel-free economy. The fluctuation of crude oil and natural gas prices and associated geopolitical squabbles have provided enough motivation for countries to start investing heavily into alternative energy technologies and associated resources.

Hydrogen as a gaseous element can be used in multiple ways in aiding renewable energy production efforts. It can be used to make synthetic natural gas, synthetic petrol and can also be used directly to run Otto-cycle internal combustion engines. The gas can also be used as an energy storage medium to store electricity in huge quantities by conversion and re-conversion of Hydrogen to electricity and back, much more than any other known battery device can provide.

The Company has also been associating with various organizations and governmental efforts to promote hydrogen economy; EcoIsland Partnership CIC and the New Energy Project initiated by the UK Department of energy and climate change are two of them. These efforts bring different renewable energy players together to consolidate their efforts towards achieving a common goal. The Company has been benefiting greatly from these efforts.

The Company, founded in 1994, was listed on AIM on 2 September 1998, on the London Stock Exchange and its shares trade with the ticker name PCF.

The Company on 5 June 2019 came out with its half-yearly results for the period ended 31 March 2019. During this period, the company’s operating profit rose by 51 per cent and earnings per share increased by 50 per cent. During this period the bank acquired Azule Limited, a broadcast and media industry finance provider and also started its bridging property finance business; both of these units are performing satisfactorily. The total customer base has increased to 19,000, whereas it was 15,000 in 2018.

During the first six-month period of the Financial year 2019, the bank was awarded the Top New Challenger award at the leasing world industry awards and received a nomination for 2019 best notice and best fixed-account provider by Money Facts. 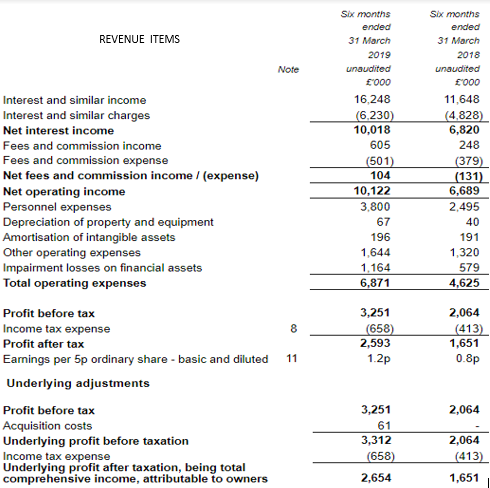 Daily Chart of PCF Group Plc, as on 13 August 2019, before the market close (Source: Thomson Reuters)

The bank is an outperformer in its class of contemporary banking and financial services providers. Its simple mode of operations and customers aligned to tailor-made services have made it an instant hit with its borrowers and depositors. The bank's assets to liabilities ratio stands at 1.21 and cash generated from operating activities are at – 29,278, meaning that more funds have been lent out compared to deposits taken from depositors.

The bank's balance sheet and liquidity position seem to be in a good position and the business performance is rapid. The new lines of business that the bank has entered into are also highly profitable and have been delivering good returns for contemporary competitors. The bank has also been recognized for its good work by various market observers and rewarded accordingly.

The bank should be able to replicate its performance in the future periods, and the same results can reasonably be expected from it. The management is very confident and satisfied with the bank's performance and expects it to continue to create value for shareholders.