Which are 5 NZX technology stocks with healthy 6-month returns?

In modern times, technology has become an indispensable component of the business.

The technology sector comprises electronics, AI, computers, software, cloud computing providers, and more. The more advancement made by the tech sector, the more progressed a country is.

With this overview, let us have a look at five popular NZX tech stocks with impressive 6-month returns. 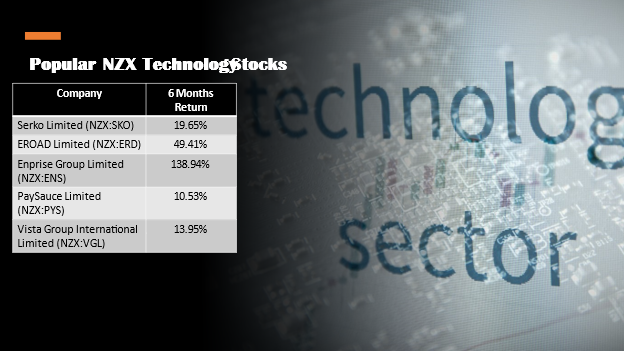 The tech-driven company centred around providing intelligent travel and expense solutions is Serko Limited. In its recently held Annual Meeting, resolutions were passed to elevate non-executive director remuneration and also for the re-election of Ms Robert Shaw as the Company’s director.

Further, the Board has been authorised to determine SKO auditor, Deloitte’s, remuneration for the forthcoming year.

Related Read: Which are 5 NZX stocks with the highest monthly returns?

The latter is an industry leader, which builds DMS technology to tackle driver fatigue, thereby improving safety in buses, trucks, and cars.

The said partnership would help ERD to leverage the technology, thereby focusing on its fleet safety by way of better driver behaviour.

Interesting Read: What are the top tech stocks in New Zealand?

Established in 2004, Enprise Group Limited is an investment company in software and tech space. On 21 September, the Company paid a final dividend of 2.5 cps to its shareholders.

In this regard, ENS had fixed the foreign exchange rate at AU$0.9520.

PaySauce Limited was founded in 2015 and works as a fintech company.

Recently, the Company had its Annual Meeting, wherein its shareholders passed resolutions related to the re-election of a director and also authorising the Board to fix the fees of Grant Thornton as the Company’s auditor.

Must Read: Paysauce (NZX:PYS) What points were discussed during its ASM?

Its total revenue stood at NZ$44.9 million and its EBITDA clocked at NZ$6.4 million, owing to a wider industry recovery and a continuous flow of movies into global cinemas.

VGL launched Vista Cloud, thus reflecting its focus on continuous innovation, and expanding the relevance of the product.

The Company forecasts EBITDA in the range of NZ$95 million to NZ$100 million for FY21.

Do Read: Could these 5 NZX small-cap stocks be considered for long term?

The technology sector steers the growth of an economy and has been witnessing a surge in demand for services related to the sector.