The outbreak of COVID-19 pandemic has impacted several sectors and the companies. The lockdowns which were imposed to restrict the spread of this deadly virus impacted the operations of the companies. However, now some sectors and companies are expected to perform well moving forward. This company has posted decent interim results for the 6 months ended 31st December 2020. This company is also possessing decent cash balance which could help it in navigating tough conditions. The stock price of this company has witnessed a rise of ~125.7% in 9 months and by ~59.5% in 6 months.

Enprise Group Ltd (NZX: ENS) happens to be a high-tech software as well as services investment company. The company has invested in 5 businesses- the wholly-owned companies Enprise Solutions and Kilimanjaro Consulting, subsidiary iSell, joint venture Datagate Innovation, as well as a holding in Vadacom.

ENS has recorded revenue from contracts with customers (unaudited) of $7.44 million during the six months ended December 2020, a growth of 100.3% as compared to the six months reporting period in September 2019, although it came below the company’s expectations. However, operating profit came in better than expected due to the combination of cost-containment measures and efficiencies generated by operating as a combined enterprise solutions division.

The company has utilised assistance from the Australian government totalling $0.756 million in retaining and retraining staff on MYOB's new cloud software MYOB Advanced so that the company could keep pace with the fast adoption of the cloud solutions accelerated by the pandemic situation as well as the requirements to work from home. 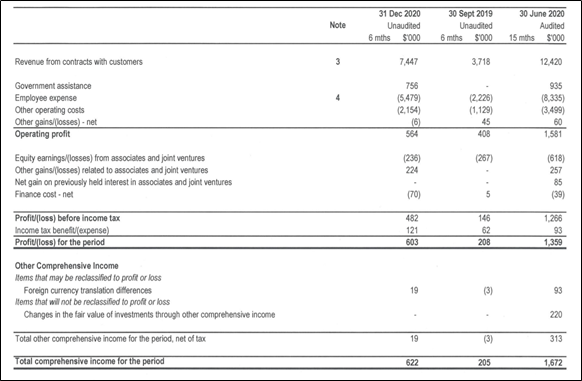 The increase in the stake was done through the participation in iSell rights issue worth $1 million and has acquired its rights along with certain shortfall shares. Notably, Enprise investment was for 2,162,851 new shares at A$0.40 per share. It needs to be noted that Enprise has utilised its existing cash reserves for this rights issue. iSell has developed as well as sells the cloud quoting system which is utilised by the IT reseller market in Australia, NZ, South Africa, U.K. & Ireland.

The company, on 23 February 2021, has declared a dividend of 2.0 cents per share and no imputation credits are attached to the dividend. Accordingly, the board has applied a dividend reinvestment plan. It was stated that, under DRP, the shareholders that are eligible would be having an option to reinvest the net proceeds of the cash dividend payable or credited on all or some of the shareholders shares by the way of acquisition of further shares in the company.

Datagate appointed Eric Hernaez to the post of non-executive director. Mr. Hernaez managed to invest $165,000 for 75,000 shares. Notably, these shares were issued at the last rights issue price of $2.20 per share. Datagate happens to be the SaaS telecommunications billing solution for the managed service providers (or MSPs).

As founder as well as president of SkySwitch, Eric Hernaez led the team which established the business from inception to one of the well-reputed providers of white label UCaaS in North America, having more than 500 reseller partners.

The combination of Enprise Australia, Enprise Solutions, and Kilimanjaro Consulting into a single operation as Enterprise Solutions has been wrapped up. Notably, the division is operating well under single management team. The group is being benefitted from the efficiencies created in spite of the lower than budgeted revenues. It was also mentioned that the Enterprise Solutions division has been leveraging its position as the only MYOB EXO and MYOB Advanced reseller with the offices in NZ and Australia, in order to target trans-Tasman businesses. The division is well placed to reap the benefits of the trend towards cloud while having the stable, well supported, secure as well as continually developed on-premises offering. The division possesses the Platinum Partner status with MYOB in NZ as well as has Diamond Partner status with MYOB in Australia.

Datagate was having 122 paying customers at 31st December 2020, which implies annualised recurring revenue of $1.255 Mn, a rise of 49.8% in the last 12 months. Datagate is focused towards selling as well as on-boarding new customers mainly in North America.