During the COVID-19 crisis where numerous companies are struggling to survive with lockdowns as well as social distancing norms impacting their respective businesses, it can be said that technology companies have evolved as a winner during this period. Considering the situation of lockdown in multiple geographies, more and more people are working from home as per the government guidelines so that the spread of coronavirus can be prevented. The impact of COVID-19 was felt across the globe, derailing many businesses. However, tech businesses have managed to sail through COVID-19. This stock has delivered the return of ~98.71% in the span of only 9 months and, in the time frame of past 3 months, the stock rose by ~32.47%.

The company makes the sales procedure for physical retailers smooth, engaging, and profitable by discovering where customers are, what they want and then facilitating their purchases. The company is having more than 191 million end users on the platform in 59 countries. Notably, its clients are McDonald’s, White Castle, Super Indo and Loyalty New Zealand. 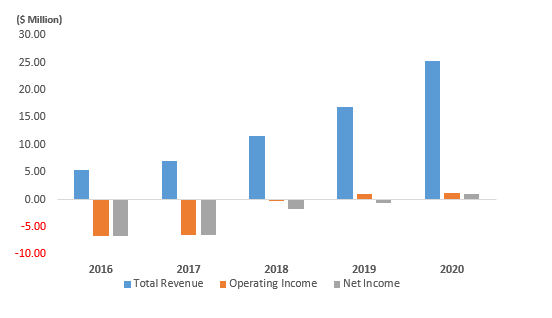 The company’s technology platform is now one of the country’s largest as well as busiest cloud-based technology platforms. It has more than 182.7 million end-users on the platform in 60 countries. It is currently delivering ~5.6 million push messages per month in 78 different languages. The company also stated that API calls per month have now reached 23.5 billion. Therefore, these statistics reflect the robustness of the company’s platform and its ability to perform at scale.

The company aims to become a global leader in the delivery of highly personalised mobile engagement experiences that drive sales. The company further stated that the investment made by McDonald’s happens to be a solid validation that the company is well on the way to achieve its goal.

After refreshing its management team, the company has concentrated on profitable growth and have achieved a major transformation in the company’s financial performance. This has been achieved through a mixture of improved management of existing customers, new business development, operating cost containment and driving value from the existing technology platform.

The global mobile marketing sector is rising rapidly Y-o-Y and was projected to be worth over US$53 billion in 2018 and is expected grow at a CAGR of 23% from 2019 to 2025. The company has been positioning itself in the market to secure this growth and, in FY21, the company is planning to invest some of its cash reserves to improve its sales, marketing, consulting, product development and platform capability to drive this outcome.

The company has $14.219 million cash on hand and has also achieved positive cashflow from operating activities for the third successive year.

In the month of April 2019, McDonald’s purchased a 9.9% equity stake in the company and on the back of that investment, the company’s relationship with McDonald’s has continued to strengthen across FY20.

PLX Plans to Get Listed on ASX

The company is considering undertaking an IPO (or initial public offering) as well as applying for admission to the Official List of ASX (or Australian Securities Exchange). This may require the company to move its primary listing from the New Zealand Stock Exchange (NZX) to the ASX and re-classifying its current NZX listing as an NZX Foreign Exempt listing, which would be allowing its shares to continue to be quoted on New Zealand Stock Exchange.

The company will remain headquartered in Auckland as well as domiciled in NZ.

With the increased sales and marketing activity in the US, the company’s pipeline of prospective customers has increased significantly; however, it believes that in the near-term sales conversion might be longer in the COVID-19 world. The company’s Board is confident with regards to the prospects for the business and the leadership team as well as talented staff are continuing to work hard in order to meet the expectations of customers, capture new customers, build innovative new products as well as refine the technology platform to prepare for growth it expects.

New user. Create account.
forgot Password
Enter the email address associated with your Kalkine account.
Set new password
To verify your email, we've sent a One Time Password (OTP) to
What are the top tech stocks in New Zealand?
We use cookies to ensure that we give you the best experience on our website. If you continue to use this site we will assume that you are happy with it. OK