Penny stocks are stocks that trade for lower than $5.

Investing in penny stocks can be risky and volatile due to their low price and low liquidity. A penny stock can turn into multibagger stocks due to an increase in their prices variably from the time money was invested in them.

Penny stocks are not easy to find, majorly those that turn into multibagger penny stocks.

On this note, let’s look at 4 potential NZX penny stocks that can perform well this year. 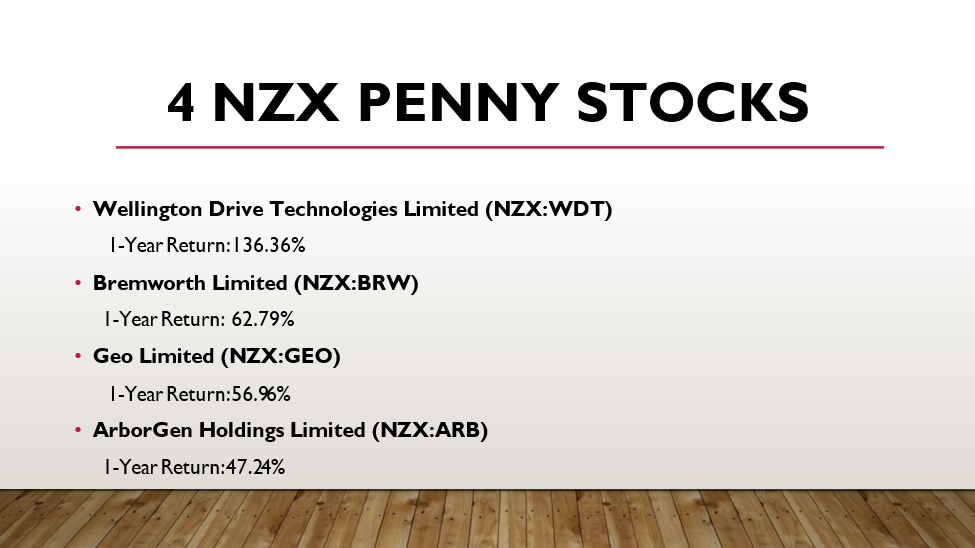 A provider of Internet of Things (IoT) solutions, Wellington Drive, notified that revenue and EBITDA for FY21 were likely to be in its previously announced range. The revenue is predicted to be nearly US$47 million, while EBITDA is expected to be roughly $3.9 million for the period.

Revenue is forecasted to further grow by nearly 25% to US$60 million in FY22 with the extra gross profit to be reinvested back in staff and infrastructure to support strong demand.

Geo, a Software as a Service business, witnessed a 17% decline in its total revenue to $4 million in FY21 but a 36% improvement in its EBITDA loss in the financial year. The Group witnessed an increase of 286% in new customers in H2 FY21 on pcp.

Also Read: Which are the 4 fastest growing NZX stocks to explore in 2022?

Geo informed on Wednesday that 568,382 unlisted share options held by one of its employees had lapsed and had been annulled without being exercised.

Leading carpet and flooring manufacturer Bremworth went ahead with its all-wool and natural fibres strategy in FY21 amid shifting consumer trends and increased demand for natural products. It reported a 5% drop in its revenue to $111.6 million but a 47% rise in normalised EBITDA to $3.4 million in FY21.

DO READ: Are these 5 NZX dividend stocks worth considering in 2022?

The Group delivered improved financial performance. Bremworth plans to grow with its new strategy and steer through the economic recovery post-COVID-19 in FY21-FY23.

ArborGen Holdings, involved in the forestry genetics business, announced on Friday that it expected US GAAP EBITDA between US$9.5 to US$10.5 million in FY22 given that a certain level of seedlings remained unsold. The reduced guidance was due to a gap in sales of reduced margin Open Pollinated (OP) seedlings.

ALSO READ: Which are 5 prominent NZX agriculture stocks to follow in 2022?

The Company had estimated the guidance to be between US$11.3 to $11.7 million in November 2021 given the supply chain and COVID-related concerns in the US. The pandemic has been causing substantial disruptions since the guidance leading to transport issues and labour scarcities.

Investors can pick on multibagger penny stocks by looking at the financial health, fundamentals and progressing ability of the Company in the long run.