Penny stocks are less expensive to invest in because they trade for less than a dollar. As a result, penny stocks can be purchased without risking a significant amount of money.

A small increase in the price of a penny stock could result in a large profit percentage, which is not always the case with larger companies.

As we step into the new year, let’s skim through 5 NZX stocks that can be considered in 2022. 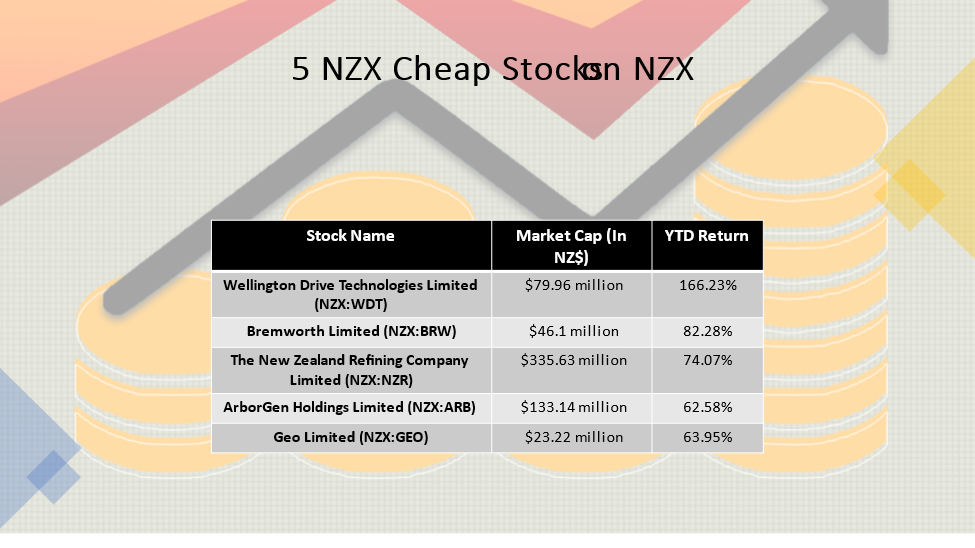 Leading the IT sector in IoT solutions and devices, WDT, expects its revenue to be nearly US$47 million and EBITDA before unusual one-off items to be nearly $3.9 million in FY21.

RELATED READ: Which are the 4 fastest growing NZX stocks to explore in 2022?

A leading manufacturer of carpet and flooring, Bremworth, took bold steps to execute its all-wool and natural fibres’ strategy in FY21.

RELATED READ: Are there any NZX shares to be explored under NZ$1?

The Group’s revenue was down 5% in FY21 due to its decision to exit synthetics. However, it saw strong growth in wool carpet sales in H2 because of strong consumer demand in NZ and Australia.

BRM has a robust balance sheet and remains well funded to execute its 5-year plan.

Functioning as an independent fuel infrastructure entity, The New Zealand Refining Company recorded RAP throughputs of 1.6 Mbbls in September/October 2021, which was 37% lower than the same period previous year due to Auckland's Level 4 and Level 3 lockdowns.

In addition, the Group raised almost $48.5 million in fresh equity, including a $39 million placement of additional shares last month, to finance private storage facilities and those under negotiation.

Engaged in forestry genetics, Arborgen Holdings delivered a 59% increase in its revenue within the US and Brazil at $4.6 million in H1 FY22.

After completing the sale of its Australian and NZ business for $22.25 million, ARB notified that it has also paid back US$2.88 million of debt raised in 2019 to finance the purchase of ArborGen’s headquarters worth US$14.4 million in South Carolina.

ARB expects Brazil’s earnings to rise more than 50% in FY23 due to stronger pricing for both eucalyptus and pine seedlings, and increased sales.

Geo, a software as a Service (SaaS) business, reported strong customer growth and registered the second-highest new sales quarter in Q1 FY22. Geo saw a 286% rise in its new customers and a 176% increase in new licences in H2 FY21 on pcp.

ALSO READ: Why to explore 5 NZX technology stocks ahead of 2022?

The Group also finished both of its earlier announced placements on 2 December, concluding its capital raising of $7 million. Geo plans to attain 40%-50% ARR growth in increasing marketing spending and expanding partner channels in FY22.

Penny stocks majorly have low-market capitalisation and trade in less quantity. However, they also have the ability to give multi-bagger returns to investors.