What has been last 6-month returns for 5 NZX penny stocks?

Penny stocks trade at lower prices and can be bought in larger numbers due to their low prices. These stocks have low liquidity but offer high returns in a short time period. 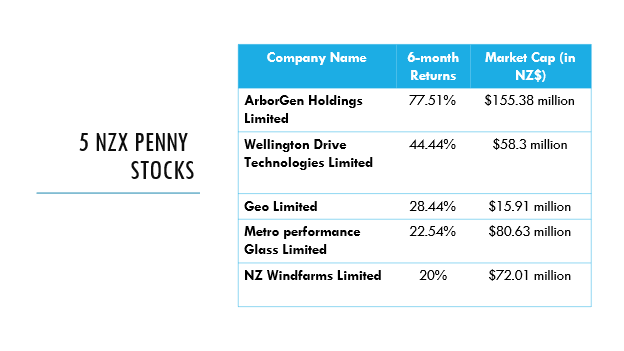 Here is a look at 5 penny stocks that have performed well in the past six months.

Engaged in the forestry genetics business, ArborGen delivered an EBITDA of $5.4 million despite COVID-19-related disruptions in FY21. However, the Group reported a 10% decline in seedling sales during the period to 391 million units.

ARB has a FY22 target EBITDA between the range of US$13 million and US$14 million.

Leading Internet of solutions Company, Wellington Drive, reported a 49.2% increase in revenue in the first half of this year on pcp, to $30.6 million. WDT also announced recently that 3 million ECR2 motors have rolled off the production line since their launch in late 2016.

The Group also witnessed a substantial drop in costs because of permanent efficiencies, and short-term cuts in salaries, rent and marketing spend in H1 amid COVID-19.

High-performing glass and the industry-leading service provider, Metro Performance, resumed its operations in NZ regions that are under Alert level 3 with all Australian plants continuing to run.

The Group is keeping an eye on changes in COVID-19 restrictions in both countries. It will provide a further update in November 2021.

Windfarm owner and operator, NZ Windfarms, announced some governance changes on 2 September. The company stated that John Southworth, the Chair and Director, shall step down from his position in the ASM to be held in October while Christine Spring shall be appointed Interim Chair for the Company if all shareholders agree on the same.

The Group posted the second-highest net electricity revenue of $9.7 million and a net operating a cashflow of $4.9 million in FY21.

Though penny stocks can lead to unpredictable gains, they are also high-risk investments at the same time.