In spite of being volatile, penny stocks are a huge hit among beginners and small investors. They sometimes yield exemplary rewards, even though they are cheaply priced.

In other words, massive profits can be generated by investing a small amount in these penny stocks over a period of time.

That said, let us skim through the five NZX penny stocks that have growth potential. 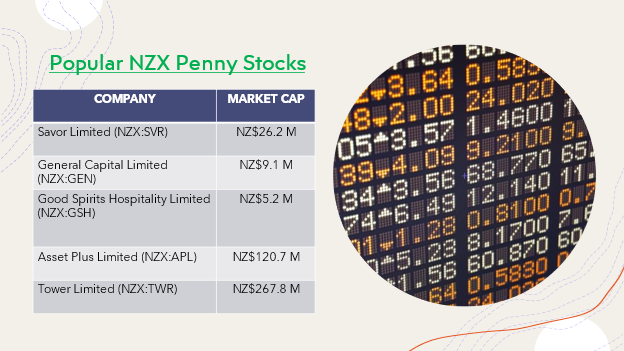 Savor Limited is a well-known hospitality business in New Zealand. On Thursday, in its Annual Shareholder Meeting, the Company’s shareholders carried out resolutions for the election of Ryan Davis and Louise Alexander to the post of directors.

Also, votes were cast in favour of appointing EY as SVR's auditor, and directors were empowered to determine its remuneration.

Operating in the financial space, General Capital Limited had recently provided an update about its subsidiary, General Finance Limited.

Must Read: Look at the 5 attractive financial stocks listed with NZX

Its MD, Mr. Brent King, stated that General Finance witnessed another positive quarter and would continue to update the market for any developments.

At the closing bell, on 19 November, General Capital traded flat at NZ$0.052.

Good Spirits Hospitality Limited is another company that has businesses in the food and beverage and hospitality sectors across the country. A few days back, it has apprised its stakeholders of entering into a deal to acquire the Nourish Group.

With this acquisition, GSH’s total venues would increase to 20, including 10 of Nourish Group’s.

The transaction involves a base purchase price of about NZ$21.3million payable in cash along with an additional payment of nearly NZ$5.9 million to be paid within two years depending upon the acquired venues’ performance.

Known for holding a diversified portfolio of properties across NZ, Asset Plus Limited has recently announced the settlement date pertaining to the sale of Eastgate Shopping Centre.

Related Read: Which are 5 NZX REIT stocks to look at in November?

The sale of Eastgate which would now occur on 1 April 2022, will increase APL’s earnings for FY22.

Also, with the ease of restriction, construction has restarted at Munroe Lane, which earlier was paused due to alert level 4 in Auckland, with the target completion date now being extended.

Tower Limited provides general insurance to its customers. Of late, it has updated its stakeholders about acquiring an additional 22% interest in National Pacific Insurance Limited for nearly $3.4M.

This has brought TWR’s total stake in the said company to 93%.

Penny stocks when chosen carefully after thorough analysis could prove to be multibaggers.