However, as of now, the above data suggests that the reducing number of cows resulted in the marginal decline of milk production. Higher debt, uncertain situation for farmers, increasing regulations on industries, with regards to climate by government have together slowly discourage the farmers to operate the dairy farms.

Good Read; Dairy and Farm: A Glance at Fonterra and Synlait Milk 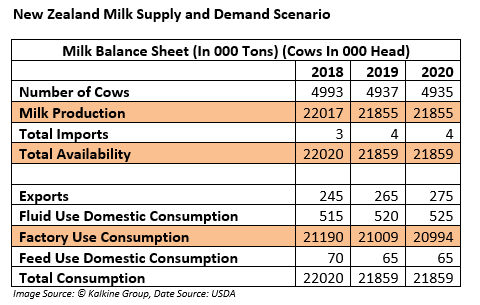 Decline in the number of Dairy Cows/Milk production

The above balance sheet suggests, the number of dairy cows started reducing after being on peak for many consecutive years. According to USDA, the total dairy cow numbers declined marginally by 0.04% to 4.935 million in 2020.

A similar trend can be seen in milk production as well, which became stagnant and slipped downwards. On export front, liquid milk export was estimated at 275000 tons in 2020, which is 4% higher compared to 2019.  The demand of milk from factories and for feed purpose also estimated lower in 2020 compared to last year.

GDT price index also rose along with volumes in the first global dairy auction of the month held at GDT Events. GDT price index surged 2.2 percent to be noted at US$ 3,143 per ton on Tuesday. This auction is generally held twice a month, with the next auction scheduled on 20th October 2020.

New Zealand dairy companies are earning profit by selling food ingredients powder containing high protein. However, presently, there are technologies that have developed products like plant proteins to compete with the dairy industry.

Plant proteins are made by taking out the protein from plants like soy, pea, and rice to make food ingredients.

With the cost effectiveness, these plant proteins are set to replace the dairy proteins from people's food, which will become a big challenge for the dairy industry.

Synthetic protein is another technology, which could create potential risk for dairy products. Various industries use yeast and other microbes to create dairy proteins. By mixing yeast, sugar, and water, fermentation takes place, which turns the sugar into dairy proteins.

With increasing government regulations over the limit of releasing farm wastes like nitrogen, phosphate, etc to the rivers, some dairy farms would find it difficult to manage the extra cost to remove the on-farm effects on water bodies, while adhering to the new government rules.

Being a dairy processor, Fonterra is exposed to the risk of providing lower quality food products, which will raise a question mark on food safety, and could damage the brand and reputation of the Company in front of consumers.

Last year, Fonterra decided to reduce its partnership stake in Chinese infant milk producer Beingmate due to higher costs incurred while operating the farms in China.

Did You Miss Reading;  Fonterra Agrees to sell China Farms