Do these 2 NZX midcap stocks have growth prospects in Q4?

Midcap stocks are referred to those companies, which have a market cap between NZ$2 billion to NZ$10 billion.

Though being relatively low priced as compared to large-cap stocks, these companies are growth-oriented and have the potential to surpass their big peers.

Hence, investors are attracted to invest in such companies.

That said, let us check out the two popular NZX listed midcap stocks, and whether they have  growth prospects in Q4. 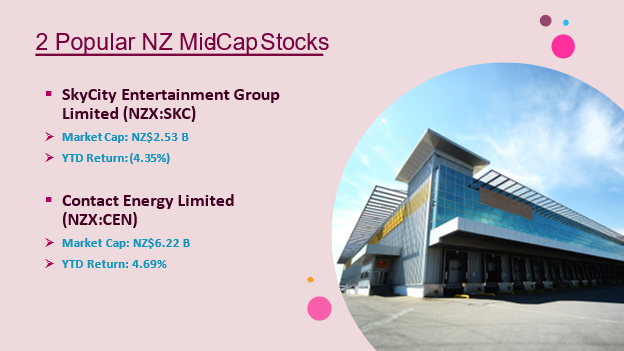 A few days back, the Company had informed its stakeholders about the retirement of its Chair and Director, Rob Campbell.

Campbell plans to step down early next year so that he could focus on other work commitments.

SKC has begun to seek a suitable replacement for the said position.

Contact Energy Limited is the country's famous electricity generator as well as a leading provider of gas and broadband connections.

Recently, CEN has intimated its shareholders of conducting an online 2021 ASM on 10 November.

If deemed fit by its shareholders, the Company intends to pass resolutions relating to the re-election of David Smol and Jon Macdonald as well as the election of Sandra Dodds and Rukumoana Schaafhausen for the post of directors.

Further, it plans to empower its Board to fix auditor’s fees and expenses.

An ideal investment portfolio has a balanced mix of all the stocks, be it largecap, midcap, or smallcap stocks. With a diversified portfolio, investors are not much affected by the market turbulence.