According to a new survey, more than half of the New Zealanders opines that the prime reason for the country’s escalated house prices is its property investors, while some blamed foreign buyers and the existing Government for this price rise.

However, NZ’s Housing Minister has attributed the current house price hike to years of neglect and inaction towards tackling housing affordability.

Further, a leading economist has stated that the key reason for driving house prices was long periods of falling interest rates.

That said, let us look at the five NZX-listed REIT stocks for the current year. 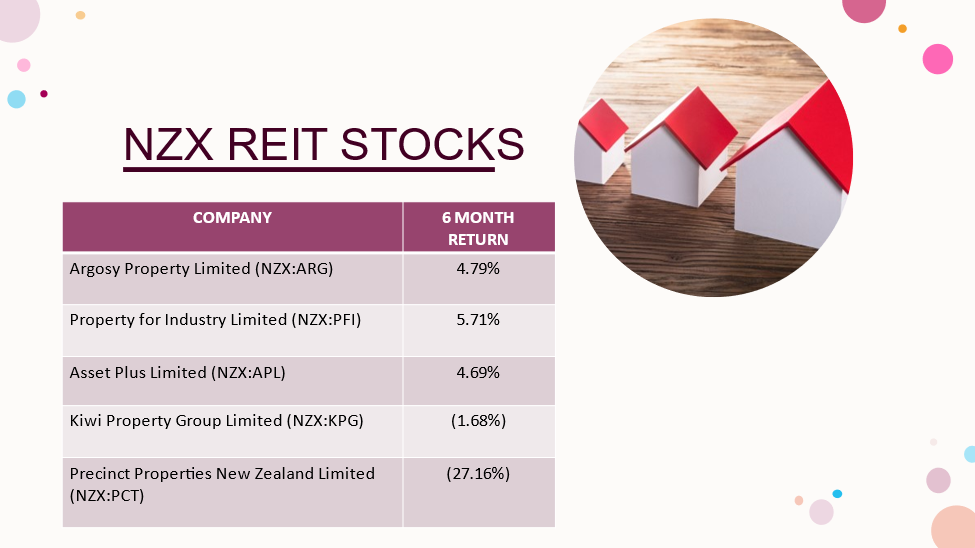 Must Read: Which 3 NZX REIT stocks to explore amid robust housing sales?

It posted a record NPAT of NZ$127.0 million for the said duration backed by sustained growth during the said period.

Property for Industry Limited offers property investment and related services. A few days back, the Company revealed the acquisition of a Penrose-based site for NZ$6.825 million, a settlement of which is expected to occur in March next year.

Related Read: Which 5 NZX dividend stocks under NZ$5 to consider in 2022?

Moreover, PFI has disclosed a strong increase in its portfolio property valuation, amounting to NZ$150 million for the half-year period ended 31 December 2021, thus bringing the total value of its combined 97 properties to NZ$2.164 billion at the end of 2021.

Asset Plus Limited has released its half-year results for the period ended 30 September 2021. Its AFFO was reported at NZ$2.57 million.

Further, due to the COVID-19-induced lockdown, its Munroe Lane development has been delayed, which will now be completed by March 2023.

A Quick Read: Do 5 NZX penny stocks have the potential to turn into multibaggers?

APL will distribute a gross quarter dividend of 0.519 cps on 14 December and is focused on delivering its projects and at the same time, maintaining a passive income stream.

NZ’s prominent real estate company is Kiwi Property Group Limited. Recently, the Company has announced signing a conditional agreement with IKEA regarding the sale of land at Sylvia Park.

It is noted that the latter would use for setting up its future stores and customer meeting points.

Precinct Properties New Zealand Limited boasts developing premium real estate properties across Auckland and Wellington. A few days back, it had disclosed that PCT010, its senior secured fixed-rate bonds, would mature on 17 December.

Do Read: Are there any cheap NZX dividend stocks under NZ$5?

The last trading date of these bonds was 3 December and payment for the same will be made on 17 December.

New Zealand is currently one of the hottest property markets across the world, with affordable housing being a major concern. The national government is trying its best to cool down the country's property market marked with an enormous price rise.